The Royal Regiment of Artillery, commonly referred to as the Royal Artillery (RA), is the artillery arm of the British Army. Despite its name, it comprises a number of regiments. 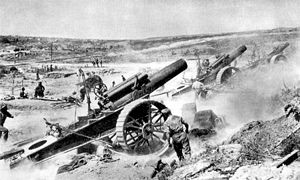 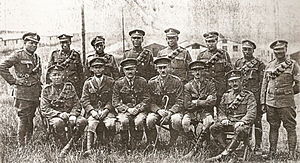 The introduction of artillery into the English army came as early as the Battle of Crécy in 1346.[1] Henry VIII made the army's artillery semi-permanent in the sixteenth century but the recognition of the need for a permanent body of artillery did not happen until 1716.[1]

Before the 18th century, artillery 'traynes' were raised by royal warrant for specific campaigns and disbanded again when they were over.[1] On 26 May 1716, however, by royal warrant of George I two regular companies of field artillery, each 100 men strong, were raised at Woolwich.[1] The title "Royal Artillery" (RA) was first used in 1720.[1] On 1 April 1722 the two companies were increased to four and grouped with independent artillery companies at Gibraltar and Minorca to form the Royal Regiment of Artillery, commanded by Colonel Albert Borgard.[1] In 1741 the Royal Military Academy was formed in the Royal Arsenal at Woolwich (RWA) to provide training for RA and Royal Engineers (RE) officers.[1] The regiment expanded rapidly and, by 1757, had 24 companies divided into two battalions, as well as a cadet company formed in 1741.[1] During 1748, the presidential artilleries of Bengal, Madras and Bombay were formed.[1] 1756 saw the creation of the Royal Irish Regiment of Artillery.[1] In 1762 the Royal Artillery Band was formed at Minden. By 1771 there were 32 companies in four battalions, as well as two "invalid companies" comprising older and unfit men employed in garrison duties. During 1782, the regiment moved to the Royal Artillery Barracks (front parade) on Woolwich Common.[1] In January 1793, two troops of Royal Horse Artillery (RHA) were raised to provide fire support for the cavalry, augmented by two more in November 1793.[1] All RHA personnel were mounted. The Royal Irish Artillery was absorbed into the RA in 1801.[1] During 1805, the Royal Artillery moved to Woolwich Common.[1] In 1819, the Rotunda was given to the regiment by the Prince Regent to celebrate end of the Napoleonic Wars. (It was originally built in St. James's Park as the outer casing of the tent in which the Prince Regent entertained the Allied sovereigns in 1814.[2]) In 1832, the regimental mottoes were granted.[3]

The regiment was under the control of the Board of Ordnance until the board was abolished in 1855. Thereafter the regiment came under the War Office along with the rest of the army.[1] The School of Gunnery established at Shoeburyness, Essex in 1859.[1] In 1862 the regiment absorbed the artillery of the British East India Company—21 horse batteries and 48 field batteries—which brought its strength up to 29 horse batteries, 73 field batteries and 88 heavy batteries.[1]

On 1 July 1899, the Royal Artillery was divided into three groups: the Royal Horse Artillery of 21 batteries and the Royal Field Artillery of 95 batteries comprised one group, while the coastal defence, mountain, siege and heavy batteries were split off into another group named the Royal Garrison Artillery of 91 companies.[1] The third group continued to be titled simply Royal Artillery, and was responsible for ammunition storage and supply. Which branch a gunner belonged to was indicated by metal shoulder titles (R.A., R.F.A., R.H.A., or R.G.A.). The RFA and RHA also dressed as mounted men, whereas the RGA dressed like foot soldiers. In 1920 the rank of Bombardier was instituted in the Royal Artillery.[1] The three sections effectively functioned as separate corps. This arrangement lasted until 1924, when the three amalgamated once more to became one regiment.[1] In 1938, RA Brigades were renamed Regiments. During the Second World War there were over 1 million men serving in 960 gunner regiments.[4] In 1947 the Riding House Troop RHA was renamed The King's Troop RHA and, in 1951, the title of the regiment's colonel-in-chief became Captain General.[1] When The Queen first visited the Troop after her accession, it was expected that it would become "The Queen's Troop", but Her Majesty announced that in honour of her father's decision it would remain "The King's Troop".[5]

The Royal Horse Artillery, which has always had separate traditions, uniforms and insignia, still retains a separate identity within the regiment.[1]

From its beginnings, the Royal Artillery has been based at Woolwich, in south-east London. In 2003 it was decided to move the headquarters to Larkhill on Salisbury Plain in Wiltshire (the RA's training ground, where the Royal School of Artillery has been based since 1915). The last Royal Artillery troops left Woolwich Barracks in 2007; in 2012, however, the King's Troop, Royal Horse Artillery was relocated to Woolwich from their former headquarters in St John's Wood.[7]

The Royal Artillery is equipped with a variety of equipment and performs a wide range of roles, including:

The Royal Regiment of Artillery comprises both Regular (full-time) and Reserve (part-time) units. Under Army 2020, many units are under the 1st Artillery Brigade.[8] The current regiments of the Royal Artillery are:

The Royal Regiment of Artillery comprises the Royal Artillery and the Royal Horse Artillery. The Regular Army units are:

Regular regiments of the Royal Artillery

Note: The Honourable Artillery Company is an Army Reserve unit based in London, it is not part of the Royal Regiment of Artillery although parts of it currently have a Surveillance and Target Acquisition role.[9]

The Royal Regiment of Artillery is unusual in that it has sub-units that often move between regiments, or are placed into suspended animation. See List of Royal Artillery Batteries.

The Royal Artillery is equipped with two main weapons in the air defence mission;

In the support mission, the Royal Artillery has three types of weapon;

The Regimental museum, "Firepower" located in the Royal Arsenal at Woolwich will close by 2017 and relocate in Larkhill.