The Barracks were built between 1776 and 1802 on a site overlooking Woolwich Common to accommodate the nascent Royal Artillery, which was fast outgrowing its barracks in the Warren. As originally built (1774-6) the barracks frontage was only half the present length, being the eastern half of the current south elevation (with the pediment and clock positioned centrally). Twenty-five years later, when further expansion was required, it was resolved to double the frontage by building an identical façade to the west (with a wind-dial in place of the clock). The architect James Wyatt then married the two halves together with a centerpiece triumphal arch.

Behind the south frontage, the barracks were laid out on a grid pattern, and included soldiers' accommodation, officers' quarters, the officers' mess, a chapel and a library with ancillary buildings further behind along with stores and stables for the horse artillery. Several of these buildings were altered over time or entirely replaced in one of a number of refurbishment programmes; Wyatt's officers' mess remains in situ.[2] For many years the 17.75-ton Bhurtpore gun, captured by Lord Combermere after the 1826 siege of Bhurtpore, stood outside the barracks.[3][4]

Regimental handover in the 21st century 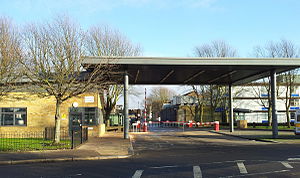 Since the nineteenth century, the appropriateness of Woolwich as a base for the Artillery had been questioned. Suggestions of a move came to nothing until a Defence Estates Review in 2003 proposed a move to Larkhill on Salisbury Plain (where the Royal School of Artillery has been based since 1915). After very nearly 300 years in Woolwich, the last Artillery regiment left the barracks in July 2007.[5] Its place was taken by the public duties line infantry battalion and incremental companies of the Foot Guards (who moved in from Chelsea Barracks and Cavalry Barracks). Soon afterwards, the Second Battalion The Princess of Wales’s Royal Regiment was posted to Woolwich from Cyprus. Then in 2012, an artillery link was regained when the King's Troop, Royal Horse Artillery moved from the St John's Wood Barracks to new quarters and stables on the Woolwich site, bringing with them a complement of 120 or thereabouts horses, historic gun carriages and artillery pieces used for their displays.[6]

The shooting events at the 2012 Summer Olympics and Paralympics were held at a temporary venue at the Barracks.[7] The original plan to conduct the shooting at the National Shooting Centre at Bisley, Surrey, was changed after the International Olympic Committee expressed reservations about the number of sports proposed to be staged outside London.

In May 2013 drummer Lee Rigby was murdered by Islamists just outside the Barracks in a terrorist attack.[8]

Woolwich has extensive links with weaponry. Besides the Royal Artillery Barracks it was the location of the Royal Arsenal complex, which was the British Government's principal armaments manufacturing facility for over 200 years (and the original home of the Royal Artillery). The Royal Military Academy which trained artillery officers and engineers from 1741 to 1939 also began in the Arsenal before moving (like the Artillery barracks) on to Woolwich Common in 1806. Rooms in the Arsenal freed by the Academy's move were used to house a Royal Artillery museum, which itself moved to the Common in 1820, where it was housed in the newly-rebuilt Rotunda. In 2001 the museum returned to the Arsenal site and was renamed Firepower. 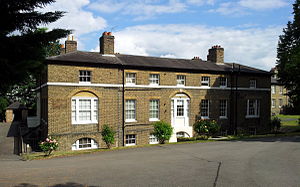 In 1780, shortly after the opening of the Barracks, the Royal Artillery Hospital was opened on a nearby site to the east - one of the first purpose-built military hospitals in England; it was later expanded, first in 1801 and then in 1816. In 1865, the ground-breaking Royal Herbert Hospital was opened at the southern end of the Common; the earlier hospital was then converted to serve as barracks for the Military Train (forerunners of the Royal Army Service Corps); the RASC remained associated with these barracks, later known as Connaught Barracks, until 1962, when the Corps was amalgamated and the site redeveloped).[9] The eighteenth-century buildings survive as Connaught Mews, an apartment complex off Grand Depot Road. 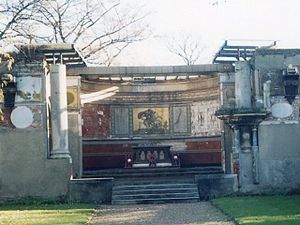 Ruins of the Garrison Church, Woolwich

St George's Garrison Church was built on the eastern edge of the Common in 1863. Romanesque in style with Byzantine detailing, it was largely destroyed by a V1 flying bomb on 14 July 1944, but the ruins have been preserved as a memorial.

From 1802, the open ground to the west of the Common became a field training ground known as the Repository Grounds. The ground was laid out with trees, ditches, ponds, ravines, earthworks, and other structures in order to train troops in the movement of guns, ammunition and heavy equipment across difficult terrain; workshops and carriage stores were built at the same time to service the site. This specialist training facility had been instituted by Sir William Congreve in the 1770s; he first established it alongside the Royal Military Repository within the Arsenal, which gave the training ground its name. As of 2012 the Repository Grounds were still used for training as well as providing new accommodation and stables for the King's Troop, Royal Horse Artillery.[2] 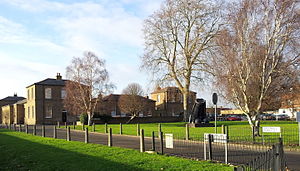 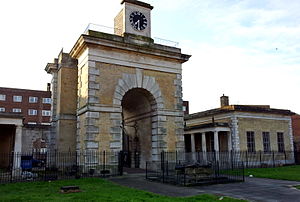 Woolwich Dockyard was one of the principal Royal Dockyards during the Tudor and Stuart periods, although it closed in the late 19th century for Royal Navy use as the Thames was by then too difficult to navigate for the naval vessels of the time.[10] The Royal Marines, who provided a military presence in the Dockyard, were housed in separate barracks (of 1842-8) in Frances Street, just south of the Dockyard. After the closure of the Dockyard, these Royal Marine Barracks were renamed Cambridge Barracks and used by the Army as additional troop accommodation. They were of an enlightened design for their time, built to provide even the lowest-ranked inhabitants with sufficient light, space and fresh air. Having become surplus to requirements, the barracks were demolished in 1972, but the heavily rusticated gatehouse arch remains on Frances Street, serving as a community centre and police office. Alongside these barracks had stood the red-brick Royal Marine Infirmary; built in 1858-60, it was one of the first pavilion-plan hospitals to be erected in England in the wake of the Crimean War. Later named Red Barracks, it accommodated the Army Ordnance Corps for a time, before becoming the Artillery College (later the Royal Military College of Science). Despite being a listed building, it too was demolished (in 1975), the College having moved to Shrivenham in 1939. The perimeter wall remains.[2] 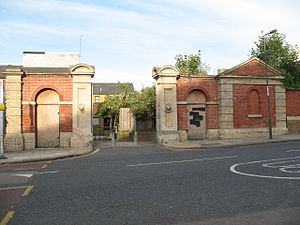 Site of the former Red Barracks

On the other side of town, near the present-day town centre, a Royal Artillery regimental garden was laid out in 1740. A small garden survived there for the next 200 years, but most of the area was soon given over to artillery storage and was known as the Grand Depot. In 1803 a Grand Depot barracks was built south of Love Lane, to designs by Wyatt, to serve as headquarters for the Royal Military Artificers (a forerunner unit of the Corps of Royal Engineers who, like the Artillery, were under the Board of Ordnance rather than the War Office). When the Royal Engineers' headquarters was established in Chatham, their Woolwich barracks were retained for use by various Ordnance troops (artillery and engineers) until it too (despite being listed) was demolished in the 1970s.[2]

Last but not least, Woolwich Common itself has long been used for military purposes. In the 18th and early 19th centuries it served as a proving ground for artillery: guns were regularly tested there until the establishment of the Artillery Gunnery School at Shoeburyness in 1859. It is still a designated military training area although troops are not so often seen nowadays.