The Royal Australian Navy (RAN) is the naval branch of the Australian Defence Force. Following the Federation of Australia in 1901, the ships and resources of the separate colonial navies were integrated into a national force: the Commonwealth Naval Forces. Originally intended for local defence, the navy was granted the title of 'Royal Australian Navy' in 1911, and became increasingly responsible for defence of the region.

Britain's Royal Navy continued to support the RAN and provided additional blue-water defence capability in the Pacific up to the early years of World War II. Then, rapid wartime expansion saw the acquisition of large surface vessels and the building of many smaller warships. In the decade following the war, the RAN acquired a small number of aircraft carriers, the last of these paying off in 1982.

Today, the RAN consists of 47 commissioned vessels, 3 non-commissioned vessels and over 16,000 personnel. The navy is one of the largest and most sophisticated naval forces in the South Pacific region, with a significant presence in the Indian Ocean and worldwide operations in support of military campaigns and peacekeeping missions. The current Chief of Navy is Vice Admiral Tim Barrett.

The Commonwealth Naval Forces were established on 1 March 1901, two months after the federation of Australia, when the naval forces of the separate Australian colonies were amalgamated. A period of uncertainty followed as the policy makers sought to determine the newly established force's requirements and purpose, with the debate focusing upon whether Australia's naval force would be structured mainly for local defence or whether it would be designed to serve as a fleet unit within a larger imperial force, controlled centrally by the British Admiralty.[3] In 1908–09, the decision was made to pursue a compromise solution and Australia agreed to establish a force that would be used for local defence but which would be capable of forming a fleet unit within the imperial naval strategy, albeit without central control. As a result, the navy's force structure was set at "one battlecruiser, three light cruisers, six destroyers and three submarines".[4]

On 10 July 1911, King George V granted the title of "Royal Australian Navy".[5] The first of the RAN's new vessels, the destroyer Yarra, was completed in September 1910 and by the outbreak of World War I, the majority of the RAN's new fleet had been realised.[4] The Australian Squadron was placed under control of the British Admiralty,[6] and initially it was tasked with capturing many of Germany's South Pacific colonies and protecting Australian shipping from the German East Asia Squadron. Later in the war, most of the RAN's major ships operated as part of Royal Navy forces in the Mediterranean and North Seas, and then later in the Adriatic, and then the Black Sea following the surrender of the Ottoman Turkish Empire.[4]

In 1919, the RAN received a force of six destroyers, three sloops and six submarines from the Royal Navy,[7] but throughout the 1920s and early 1930s, the RAN was drastically reduced in size due to a variety of factors including political apathy and economic hardship as a result of the Great Depression.[8] In this time the focus of Australia's naval policy shifted from defence against invasion to trade protection,[9] and several fleet units were sunk as targets or scrapped. In 1923, the size of the navy had fallen to eight vessels,[8] and by the end of the decade it had fallen further to five, with just 3,500 personnel.[9] In the late 1930s, as international tensions increased, the RAN was modernised and expanded, with the service receiving primacy of funding over the Army and Air Force during this time as Australia began to prepare for war.[9]

Early in World War II, RAN ships again operated as part of Royal Navy formations, many serving with distinction in the Mediterranean, the Red Sea, the Persian Gulf, the Indian Ocean and off the West African coast.[10] Following the outbreak of the Pacific War and the virtual destruction of British naval forces in south-east Asia, the RAN operated more independently, or as part of United States Navy forces. As the navy took on an even greater role, it was expanded significantly and at its height the RAN was the fourth-largest navy in the world, with 39,650 personnel operating 337 warships.[9] A total of 34 vessels were lost during the war, including three cruisers and four destroyers.[11]

After World War II, the size of the RAN was again reduced, but it gained new capabilities with the delivery of two aircraft carriers.[12] The RAN saw action in many Cold War–era conflicts in the Asia-Pacific region and operated alongside the Royal Navy and United States Navy off Korea, Malaysia and Vietnam.[13] Since the end of the Cold War, the RAN has been part of Coalition forces in the Persian Gulf and Indian Ocean, operating in support of Operation Slipper and undertaking counter piracy operations. It also deployed in support of Australian peacekeeping operations in East Timor and the Solomon Islands.[14]

The strategic command structure of the RAN was overhauled during the New Generation Navy changes. The RAN is commanded through Naval Headquarters (NHQ) in Canberra. The professional head is the Chief of Navy (CN), who holds the rank of Vice Admiral. NHQ is responsible for implementing policy decisions handed down from the Department of Defence and for overseeing tactical and operational issues that are the purview of the subordinate commands.[citation needed]

Beneath NHQ are two subordinate commands:

Fleet Command was previously made up of seven Force Element Groups, but after the New Generation Navy changes, this was restructured into four Force Commands:[17]

As of January 2016, the RAN fleet consists of 47 warships, including frigates, submarines, patrol boats and auxiliary ships.[18] Ships commissioned into the RAN are given the prefix HMAS (His/Her Majesty's Australian Ship).[19]

The Fleet Air Arm (previously known as the Australian Navy Aviation Group) provides the RAN's aviation capability. As of 2013, the FAA consists of three active squadrons plus a fourth being activated, operating five helicopter types in the anti-submarine warfare and maritime support roles.[25] The Fleet Air Arm is based at HMAS Albatross in Nowra, New South Wales, and operates from the RAN's frigates, large amphibious warfare vessels, and large support ships.

In addition to the helicopter squadrons of the Fleet Air Arm, the RAN operates an additional flying unit that comes under the operational responsibility of the Australian Hydrographic Service. The Laser Airborne Depth Sounder Flight contains the sole remaining fixed-wing aircraft operated by the RAN, and is based at HMAS Cairns in Cairns, Queensland.[26] 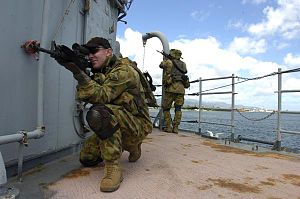 Clearance Divers during a ship boarding exercise in 2006 as a part of RIMPAC exercises.
Main article: Clearance Diving Branch (RAN)

The CDTs have two primary roles: 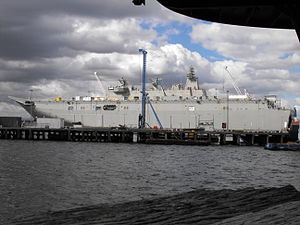 HMAS Canberra, a Canberra-class landing helicopter dock, being fitted out in 2013
Main article: Procurement programme of the Royal Australian Navy 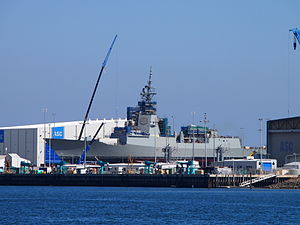 Hobart, the lead ship of the RAN's new class of air-warfare destroyers, under construction in 2015

There are currently several major projects underway that will see upgrades to RAN capabilities:

To boost the RAN's amphibious capability during the construction of the Canberra-class LHDs, the RAN acquired HMAS Choules (a former Bay-class landing ship of the British Royal Fleet Auxiliary) in December 2011, and the support vessel ADV Ocean Shield in June 2012.[29][30]

The RAN currently has forces deployed on four major operations:[32] 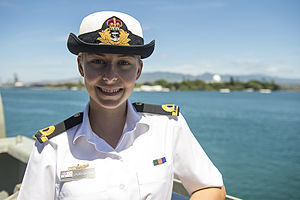 A female RAN officer in 2014. Women serve in the RAN in combat roles and at sea.

The following are the current senior Royal Australian Navy officers:

The RAN needs 2,000 recruits, including 700 apprentices,[36] to crew the next generation of warships, such as air warfare destroyers, which enter service next decade. To overcome a lack of Australian recruits, the RAN began to recruit sailors who have been laid off from other western navies.[37] 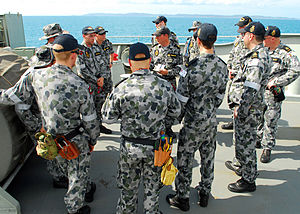 The uniforms of the Royal Australian Navy are very similar in cut, colour and insignia to their British Royal Navy forerunners. However, beginning with the Second World War all RAN personnel began wearing shoulder flashes reading Australia, a practice continuing today. These are cloth arcs at shoulder height on uniforms, metallic gold on officers' shoulder boards, and embroidered on shoulder slip-ons.

Commissioned officers of the Australian Navy have pay grades ranging from S-1 to O-11. The only O-11 position in the navy is honorary and has only ever been held by royalty, currently being held by HRH The Duke of Edinburgh. The highest position occupied in the current Royal Australian Navy structure is O-9, a vice admiral who serves as the Chief of the Navy. O-8 (rear admiral) to O-11 (admiral of the fleet) are referred to as flag officers, O-5 (commander) and above are referred to as senior officers, while S-1 (midshipman) to O-4 (lieutenant commander) are referred to as junior officers. All officers of the Navy receive a commission from Her Majesty Queen Elizabeth II, Queen of Australia. The Commissioning Scroll issued in recognition of the commission is signed by the Governor General of Australia as Commander-in-Chief and the serving Minister for Defence.[citation needed] 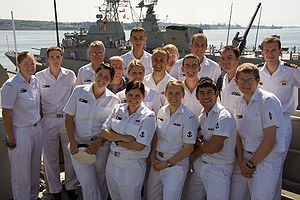 The Warrant Officer of the Navy (WO-N) is an appointment held by the most senior sailor in the RAN, and holds the rank of warrant officer (WO). However, the WO-N does not wear the WO rank insignia; instead, they wear the special insignia of the appointment.[40] The WO-N appointment has similar equivalent appointments in the other services, each holding the rank of warrant officer, each being the most senior sailor/soldier/airman in that service, and each wearing their own special insignia rather than their rank insignia. The Australian Army equivalent is the Regimental Sergeant Major of the Army (RSM-A)[41] and the Royal Australian Air Force equivalent is the Warrant Officer of the Air Force (WOFF-AF).[42]