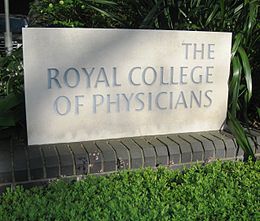 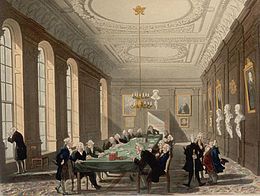 A College meeting in the early 19th century.

The Royal College of Physicians is a British professional body dedicated to improving the practice of medicine, chiefly through the accreditation of physicians by examination. Founded in 1518, it set the first international standard in the classification of diseases, and its library contains medical texts of great historical interest.

A small group of distinguished physicians, led by the scholar and humanist Thomas Linacre, petitioned King Henry VIII to be incorporated into a College similar to those found in a number of other European countries. The main functions of the College, as set down in the founding Charter, were to grant licenses to those qualified to practice and to punish unqualified practitioners and those engaging in malpractice. This included apothecaries as well as physicians. It was originally founded as the College of Physicians when it received a Royal Charter in 1518, affirmed by Act of Parliament in 1523. It is not known when the name "Royal College" was first assumed or granted, but it was finally legally confirmed only in 1960 (by the Royal College of Physicians of London Act, which was primarily required in order to move the premises of the College outside of the Cities of London or Westminster to Regent's Park).

The college has been continuously active in improving the practice of medicine since its foundation, primarily though the accreditation of physicians. It is a member of the UK Academy of Medical Royal Colleges. It is sometimes referred to as the Royal College of Physicians of London to differentiate it from other similarly-named bodies. It was the first College of Physicians in Britain or Ireland. Its establishment followed the incorporation of the Barber-Surgeons of Dublin in 1446 (by Royal Decree of Henry VI of England as Lord of Ireland), which was the first medical corporation in Ireland or Britain; the Barber-Surgeons of Edinburgh were incorporated by the City of Edinburgh in 1505. 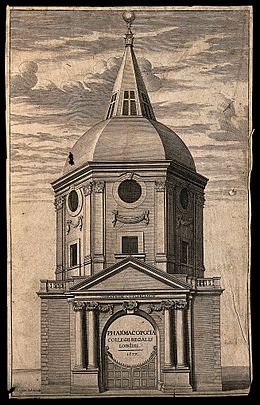 The Cutlerian Theatre in Warwick Lane, an anatomy theatre designed by Robert Hooke rebuilt after the Fire (demolished 1866).[1] The frontispiece to the Royal College's pharmacopeia, 1677. Engraving by David Loggan

The College was based at three sites in the City of London near St Paul's Cathedral, before moving to Pall Mall East (overlooking Trafalgar Square), and finally on to its current location in Regent's Park.

Throughout its history the College has issued advice across the whole range of medical and health matters. College publications include the first ten editions of the London Pharmacopoeia (written in Latin, and used for regulating the composition of medicines from 1618 and, through the College's police the Censors, for enforcing the College's monopoly on medical science, then being challenged by the Society of Apothecaries), and the `Nomenclature of Diseases' in 1869. The latter created the international standard for the classification of diseases which was to last until the World Health Organisation's Manual of the international classification of diseases superseded it in the twentieth century.

The College became the licensing body for medical books in the late seventeenth century, and sought to set new standards in learning through its own system of examinations. The College's great tradition of examining continues to this day and it is still perhaps how the College is best known to the general public.

Holders of the MRCP(UK) may also become "Collegiate Members" of the London College (using the additional post-nominal MRCP(Lond)) and/or of the other two UK colleges.

The College also has Associate, Medical Student and Foundation Doctor levels of membership.

Fellows (who use the post-nominal FRCP) are elected mostly from the general Membership (Collegiate or Affiliate), but also occasionally from among the members of the more specialised faculties within the Royal Colleges of Physicians, e.g. Occupational Medicine (MFOM), Pharmaceutical Medicine (MFPM), and Forensic and Legal Medicine (MFLM), etc. There are also Fellows who are elected de jure (usually medical experts from other countries), and honoris causa (dignitaries, members of the Royal Family, etc.).[3]

The diploma of Licentiate of the Royal College of Physicians (LRCP) is no longer awarded. The LRCP qualification used to be reserved for medical graduates, in practice mainly Bachelors of Medicine from Oxford and Cambridge, but in the mid-nineteenth century became part of a very popular initial qualification in medicine awarded together with the MRCS (Eng) by the Conjoint Board, which, by the end of the twentieth century came to be largely taken by overseas graduates. From 1993 the LRCP was awarded together with the LRCS and LMSSA through the United Examining Board until this pathway to medical registration was abolished in 1999.

The library aims to support the learning and information needs of the RCP's members, students and staff. The unique collections are also used by members of the public interested in researching:

The enquiry service provides information on the current role and functions of the RCP as well as its history. Reference access to the library collections is available to all. The reading room is open Monday – Friday, 9 – 5, apart from bank holidays.[4]

The Royal College of Physicians has had a library since its foundation in 1518, although most of the original books were destroyed during the Great Fire of London in 1666. The rare books and special collections are diverse in coverage, reflecting the collecting habits of earlier fellows and the need to provide the broad educational base considered suitable for physicians.[5]

Books and journals – new and old – display a continuum of change and development in the RCP's specialties, as well as in the medical profession. Highlights include:

Highlights of the 20th century collection include:

The book collections are displayed in regularly changing exhibitions. 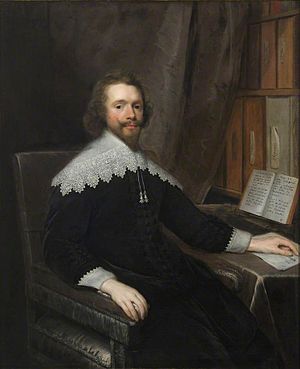 Portrait of a Physician in His Library by Cornelis Janssens van Ceulen, one of the significant portraits in the Royal College of Physicians' collection

The collection of c. 250 portraits provides a pictorial and sculptural record of presidents, Fellows and other physicians associated with it from its foundation in 1518 to the present day. It includes pieces by well-known artists, such as a bust of Baldwin Hamey Junior (1600–1676) by Edward Pierce and one of Richard Mead (1673–1754) by Louis François Roubiliac. There are portraits, such as Richard Hale (1670–1728) by Jonathan Richardson. In 1964 a volume on the Portraits of the College was published by Gordon Wolstenholme in which they were described by David Piper.

The silver collection has few pieces pre-dating the Great Fire of London (1666) because of a robbery during the previous year. Baldwin Hamey's inkstand bell and William Harvey's demonstration rod are two that survive. Many pieces of silver are used to this day for formal occasions in the College. Special objects include the President's staff of office, the caduceus and the silver-gilt College mace.

The College also owns six 17th century anatomical tables, probably made by drying and mounting the actual blood vessels and nerves of the human body onto blocks of wood and then varnishing them. They would have been used as a teaching aid for teaching anatomy, because it was difficult to obtain cadavers for dissection.

The Symons Collection of medical instruments is displayed within the College building. It began as a collection of objects relating to self-care in Georgian times and expanded to include items that would have been used by physicians when treating patients, mostly in the eighteenth and nineteenth centuries.

The collections are open to the general public Monday to Friday 9 am – 5pm. The Royal College of Physicians is a member of the London Museums of Health & Medicine.

The Royal College of Physicians building is a Grade I Listed Building. 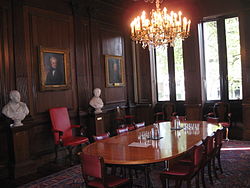 The Censors Room at The Royal College of Physicians

The College is located in St. Andrews Place, which is at the north end of the road running up the east side of Regent's Park, Park Square East. The College's previous headquarters, on Pall Mall East/Trafalgar Square, is now Canada House, part of the Canadian high commission in London. The College had a number of other locations prior to Pall Mall East, in the City of London.

The current College building itself is notable. It was designed by architect Sir Denys Lasdun, opening in 1964 and has since been recognised as a building of national importance: it is a Grade I listed building, one of a very select band of post-war buildings sharing this distinction.[6] Lasdun's use of mosaic clad concrete was extremely influential on many later public buildings. An interesting feature of the building was a 'Moving Wall', weighing five tons (5080 kg) and capable of being hydraulically lifted ten feet (3050 mm) to unite or sub-divide a hall of sixty-two feet (18.9 m) width, which was the interior width of the building. The hydraulic equipment and the steel framework for the Moving Wall were produced by Merryweather & Sons Ltd of Greenwich, hydraulic engineers. Although better known for fire fighting equipment it was not the company's first installation of this kind.[7]

Clinical Medicine is the College's own medical journal. It appears once every two months. In addition, the college publishes regular reports, clinical guidelines, and the annual series 'Horizons in Medicine'. The Faculty of Occupational Medicine publishes Occupational and Environmental Medicine, a monthly-published journal that contains studies and articles concerting topics related to human health and environmental topics.

The Faculty of Occupational Medicine was established to develop and maintain high standards of training and professional integrity in the speciality of occupational medicine. It sets exams, supervises training and supports physicians in their continued professional development. The Faculty also acts as an authoritative body for consultation in matters of education and public interest concerning occupational medicine.[9]

The College holds an annual lecture, commonly referred to as the Lumleian Lectures, which were named in honour of Lord Lumley and established as part of the Lumleian Trust. The trust and lectures were established in 1582 by Richard Caldwell, a former president of the college.[12] The subject matter of the lectures was initially in surgery, which was later changed to in medicine.[13] The first lecture was given by Richard Forster, and the lectures continue to today.

Other annual lectures are the Croonian Lecture, the Goulstonian Lecture and the Bradshaw Lecture.

Once a year, traditionally on St Lukes Day, a Fellow is appointed to deliver the Harveian Oration to the assembled college in memory of William Harvey. The oration seeks to honour the founders and benefactors of the college and encourage a spirit of experimentation amongst the members.