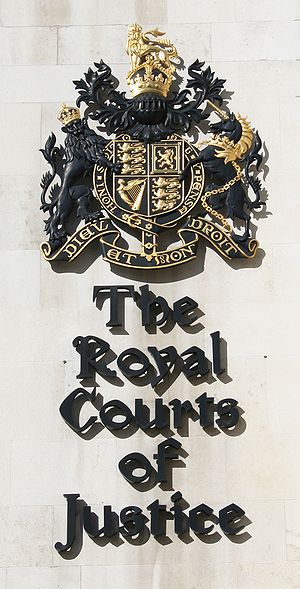 The Royal Courts of Justice, commonly called the Law Courts, is a court building in London which houses both the High Court and Court of Appeal of England and Wales. Designed by George Edmund Street, who died before it was completed, it is a large grey stone edifice in the Victorian Gothic style built in the 1870s and opened by Queen Victoria in 1882. It is one of the largest courts in Europe.[1] It is located on the Strand within the City of Westminster, near the border with the City of London (Temple Bar). It is surrounded by the four Inns of Court, King's College London and the London School of Economics. The nearest London Underground stations are Chancery Lane and Temple.

The courts within the building are open to the public, although there may be some restrictions depending upon the nature of the cases being heard. Those in court who do not have legal representation may receive some assistance within the building. There is a citizens' advice bureau based within the Main Hall which provides free, confidential and impartial advice by appointment to anyone who is a litigant in person in the courts. There is also a Personal Support Unit where litigants in person can receive emotional support and practical information about court proceedings.[2] 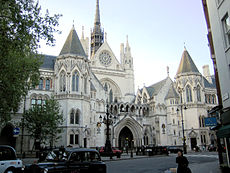 The 11 architects competing for the contract for the Law Courts each submitted alternative designs with the view of the possible placing of the building on the Thames Embankment. The present site was chosen only after much debate. 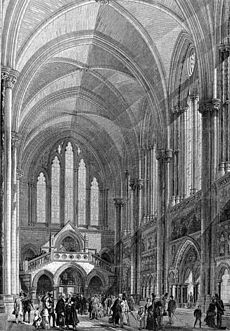 In 1868 it was finally decided that George Edmund Street was to be appointed the sole architect for the Royal Courts of Justice and it was he who designed the whole building from foundation to varied carvings and spires. Building was started in 1873 by Messrs Bull & Sons of Southampton. 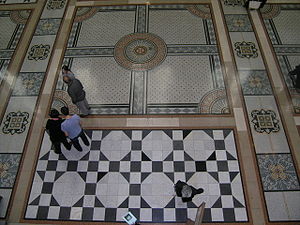 The decorated floor of the Great Hall

There was a serious strike of masons at an early stage which threatened to extend to the other trades and caused a temporary stoppage of the works. In consequence, foreign workmen were brought in – mostly Germans. This aroused bitter hostility on the part of the men on strike, and the newcomers had to be housed and fed within the building. However, these disputes were eventually settled and the building took eight years to complete; it was officially opened by Queen Victoria on 4 December 1882. Street died before the building was opened, overcome by the work.[3] Much of the preparatory legal work was completed by Edwin Wilkins Field including promotion of the Courts of Justice Building Act of 1865 and the Courts of Justice Concentration (Site) Act of 1865. A statue of Field stands in the building.[4]

Parliament paid £1,453,000 for the 6-acre (24,000 m2) site upon which 450 houses had to be demolished. The building was paid for by cash accumulated in court from the estates of the intestate to the sum of £700,000. Oak work and fittings in the court cost a further £70,000 and with decoration and furnishing the total cost for the building came to under £1 million.

Entering through the main gates on the Strand, one passes under two elaborately carved porches fitted with iron gates. The carving over the outer porch consists of heads of the most eminent judges and lawyers. Over the highest point of the upper arch is a figure of Jesus; to the left and right at a lower level are figures of Solomon and Alfred the Great; that of Moses is at the northern front of the building. Also at the northern front, over the Judges entrance are a stone cat and dog representing fighting litigants in court.

On either side are gateways leading to different courts and to jury and witness rooms from which separate staircases are provided for them to reach their boxes in court. During the 1960s, jury rooms in the basement area were converted to courtrooms. At either end of the hall are handsome marble galleries from which the entire Main Hall can be viewed.

The walls and ceilings (of the older, original courts) are panelled in oak which in many cases is elaborately carved. In Court 4, the Lord Chief Justice's court, there is an elaborately carved wooden royal coat of arms, which had been salvaged from the fire that engulfed and destroyed the original Palace of Westminster. Each court has an interior unique to itself; they were each designed by different architects.

There are, in addition to the waiting rooms, several arbitration and consultation chambers together with robing rooms for members of the bar and solicitor advocates.

Extensions to the building 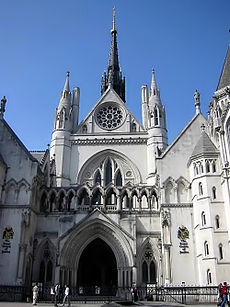 The first extension was the West Green building for which plans were drawn in 1910; the space was for extra divorce courts. They were the first to have modern air conditioning and tape recording in their original design.

The next new building was the Queen's Building, opened in 1968, providing a further 12 courts. This building also contains cells in the basement. It was intended that these courts could be used for criminal matters, however as the jury boxes can hold only 10 people they are not suitable for such a use and are now primarily used for family proceedings.

With an ever-increasing workload the 11-storey Thomas More Building was built to house the Bankruptcy and Companies Courts and more offices. A grand view can be had from the top looking over to St Paul's Cathedral and the Central Criminal Court (the Old Bailey) in the City of London.

Finally, it was necessary to build an additional 12 courts for the Chancery Division named the Thomas More Courts, which opened in January 1990. The Thomas More Building is now used by the County Court at Central London, which is not part of the High Court. All this has meant there is little room left for further extension on the site should it be necessary in the future. However, an extensive refurbishment of the east block took place during 1994–95 which provided 14 extra courts for the Civil Division of the Court of Appeal and two extra large courts which are unassigned and will be used for cases where there are several parties involved or there are an unusually large number of documents and books. [5]

It should also be remembered that there are further courts at the Rolls Building, which come under the wing of the Law Courts and are within short walking distance.

Anyone is allowed to watch the trials which are taking place free of charge, apart from private family cases such as adoption proceedings.