The Royal Crescent is a row of 30 terraced houses laid out in a sweeping crescent in the city of Bath, England. Designed by the architect John Wood the Younger and built between 1767 and 1774, it is among the greatest examples of Georgian architecture to be found in the United Kingdom and is a Grade I listed building.[1] Although some changes have been made to the various interiors over the years, the Georgian stone façade remains much as it was when it was first built.

Many notable people have either lived or stayed in the Royal Crescent since it was first built over 230 years ago, and some are commemorated on special plaques attached to the relevant buildings.

The Royal Crescent is close to Victoria Park. The street that is known today as "The Royal Crescent" was originally named "The Crescent." It is claimed that the adjective "Royal" was added at the end of the 18th century after Prince Frederick, Duke of York and Albany had stayed there.[2]

Each original purchaser bought a length of the façade, and then employed their own architect to build a house behind the façade to their own specifications; hence what can appear to be two houses is occasionally just one. This system of town planning is betrayed at the rear and can be seen from the road behind the Crescent: while the front is uniform and symmetrical, the rear is a mixture of differing roof heights, juxtapositions and fenestration. This architecture, described as "Queen Anne fronts and Mary-Anne backs", occurs repeatedly in Bath.[3] 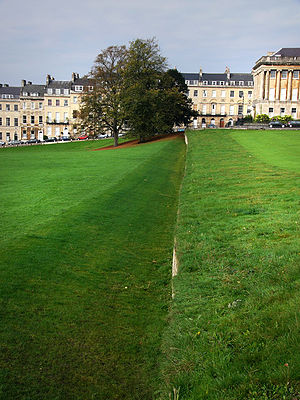 Ha-ha in front of the Royal Crescent

In front of the Royal Crescent is a ha-ha, a ditch on which the inner side is vertical and faced with stone, with the outer face sloped and turfed, making an effective but invisible partition between the lower and upper lawns. The ha-ha is designed so as not to interrupt the view from Royal Victoria Park, and to be invisible until seen from close by. It is not known whether it was contemporary with the building of the Royal Crescent, however it is known that when it was first created it was deeper than it is at present.[4]

The railings between the crescent and the lawn are included in the Heritage at Risk Register produced by English Heritage.[5] and were restored in 2011. 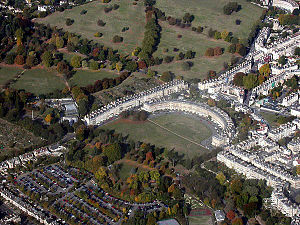 The first resident of Number 1 was Henry Sandford, a retired Irish MP who rented the house from 1776 until his death in Bath in 1796. He was described as a 'gentleman of the most benevolent disposition'. Christopher Anstey, a well-known writer of the time, was resident in number 4 from 1770 until 1805, although the plaque to him is placed on number 5.[2] Jean Baptiste, Vicomte du Barre took over number 8 in 1778 and hosted parties and gambling. He died in a duel on Claverton Down and is buried in the churchyard at the Church of St Nicholas in Bathampton.[2] From 1768 to 1774 number 9 was home to Philip Thicknesse, a soldier of fortune.[2] Number 11 was home to the family of Thomas Linley, a singing-master and conductor of the concerts from 1771. His second daughter Elizabeth Ann Linley, a singer in her own right, eloped with the playwright and poet Richard Brinsley Sheridan.[2] The centre house of the crescent was used as a residence and to host blue stocking events by Elizabeth Montagu.[2]

In the nineteenth century the popularity of the Crescent and 'taking the waters' at the Roman Baths diminished somewhat. Amongst the residents of Royal Crescent during this time were the electoral reformer Francis Burdett who lived at number 16 from 1814 to 1822 and his daughter Angela Burdett-Coutts, 1st Baroness Burdett-Coutts.[2]

The retired Admiral William Hargood lived at number 9 from 1834 until 1839 and in 1866 the same house was home to Edward Bulwer-Lytton, 1st Baron Lytton.[2]

The jurist and explorer Thomas Falconer briefly lived at number 18 before his death in 1882. A few years later the house next door at number 17 became home to Isaac Pitman who developed the most widely used system of shorthand, now known as Pitman shorthand.[2]

During the 20th century many of the houses which had formerly been the residences of single families with maids or other staff were divided into flats and offices. However, the tradition of distinguished gentlefolk retiring to the crescent continued. English professor George Saintsbury took up residence at number 1A in 1916.

In 1921, architect Robert Tor Russell used the Crescent as a source of inspiration to design the central business district of the new city of New Delhi, India. The foundation stone for the same was laid by the Duke of Connaught and the plaza was named Connaught Place. It is still the most important commercial center of Delhi.

During the Bath Blitz of World War II, known as the Baedecker Raids or Baedecker Blitz, some bomb damage occurred, the most serious being the gutting of numbers 2 and 17 by incendiaries.[6]

After World War II, during a period of redevelopment which is described as the Sack of Bath, the City Council considered plans that would have seen the Crescent transformed into Council offices. These were unsuccessful.[7]

In the 1970s the resident of No 22, Miss Wellesley-Colley, painted her front door yellow instead of the traditional white. Bath City Council issued a notice insisting it should be repainted. A court case ensued which resulted in the Secretary of State for the Environment declaring that the door could remain yellow. Other proposals for alteration and development including floodlighting and a swimming pool have been defeated.[2] 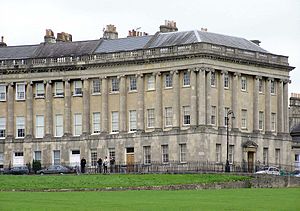 Close up of the eastern end

The houses and flats in the Crescent are a mixture of tenures – many are privately owned but a substantial minority are owned by a housing association.

Number 1 Royal Crescent is a historic house museum, owned and maintained by the Bath Preservation Trust through its membership to illustrate how wealthy owners of the late 18th century might have furnished and occupied such a house.[8] It was purchased in 1967 by Major Bernard Cayzer, a member of the family that made its fortune through the Clan shipping line. He donated it to the Trust with an amount of money for its restoration and furnishing.[2] The Bath Preservation Trust has been working during 2012-13 to re-unite Number One with its original servants' wing at Number 1A Royal Crescent, which has been in use as a separate dwelling for many years. No. 1 serves as the Trust's headquarters.

Number 16 became a guest house in 1950. In 1971 it was combined with number 15 to become the Royal Crescent Hotel occupying the central properties of the Crescent. It was sold in 1978 to John Tham, the chairman of the London Sloane Club, and restored.[2] It was later purchased by Von Essen Hotels, which became insolvent in 2011. In September 2011 it was expected that London and Regional Properties would purchase the hotel,[9] but negotiations ended in January 2012 without a deal.[10] On 2 April 2012, investment company the Topland Group announced that it had purchased the Royal Crescent Hotel.

Royal Victoria Park near the Crescent is a location for the launch of hot air balloons. Launches take place in summer, typically early morning and late evening.

The road is closed to coaches and buses, after many years of complaints by residents that the tour buses were disruptive.[11]

In 1965 the black comedy The Wrong Box (1966) used the Royal Crescent extensively as a location, standing in for London. The 1965 film Catch Us If You Can also had a sequence filmed outside the crescent and in one of its houses.[12]

In 2003, the archaeological television programme Time Team dug the Royal Crescent in search of a Roman cemetery and the Fosse Way. The remains of a Roman wall were found behind the crescent and evidence of possible Iron and Bronze Age settlement on the lawn in front.[13]

In 2007, a TV edition of Jane Austen's Persuasion, included many scenes shot at the Royal Crescent, where the Elliot family was supposedly living while in Bath.[14] The Royal Crescent featured in the 2008 film The Duchess starring Keira Knightley.[15]

The fictional heroine of BBC1 archaeology thriller Bonekickers was depicted as living in the Crescent.[16]

A panoramic view of the Royal Crescent. The ha-ha can be seen separating the upper and lower lawns.