The Royal Danish Air Force (Danish: Flyvevåbnet, lit. 'Flying weapon') (RDAF) is the air force of Denmark and is responsible for maintaining homeland defence and carrying out homeland security roles as international operations.[6] 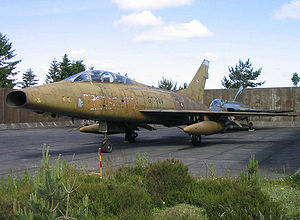 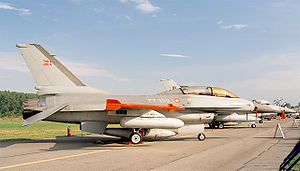 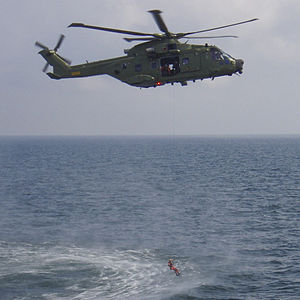 The Royal Danish Air Force (RDAF) was formed as a military service independent from the army and navy in 1950 from the merger of the Hærens Flyvertropper (Danish Army Air Corps) originally founded on 2 July 1912[7] and the Marinens Flyvevæsen (Danish Naval Air Service) which had been founded on 14 December 1911.[8] All military aviation had been prohibited during the Nazi occupation from 1940 to 1945 and so as of V-E Day the Danish armed forces had no aircraft, but the Luftwaffe had built or expanded air bases in Denmark.

The air force was led by Lieutenant General C.C.J. Førslev, who had previously served as colonel in the army and as first commander of the Danish Army Air Corps. The national command was located at Værløse Air Base which also served as Command East, while Command West was located at Karup in central Jutland. Royal Air Force volunteer and former member of the Free Norwegian Forces in England, Kaj Birksted, was appointed chief of the flying staff. The rivalries and mutual disrespect between the established officer Førslev, who had never been in air combat himself, and the experienced fighter ace Birksted led to a series of misunderstandings which delayed the operationalization of the air force. Further, the East and West commands lacked experience and knowledge of the newly delivered Gloster Meteor and F-84 Thunderjet aircraft.

The Danish armed forces received 38 surplus Supermarine Spitfire H. F. Mk. IXE[9] and 3 P.R.Mk. XI in 1947-48[10] plus four additional airframes for ground instruction, which were operated by units of the Hærens Flyvertropper and Marinens Flyvevæsen prior to their merger, and by the Royal Danish Air Force until 1956, when the last examples were retired and all but two scrapped.

One survived for a number of years in a children's playground. The one surviving instructional airframe was later restored to depict the number '401' Spitfire Mk. IX. This airplane is now preserved at Dansk Veteranflysamling at Stauning Airfield in Jylland.[11]

Pilot training was initially based at Avnø from May 1946 until 1951, when the school were transferred to the U.S. under the "Military Assistance Programme". The school at Avnø continued to conduct tests to choose the candidates for the American training programme. In 1947 the RDAF established a school for aircraft mechanics, based at Værløse Air Base.[12] In 1951, the RDAF officers school was inaugurated at Rungstedlund north of Copenhagen, while airmen were educated at Værløse.

The air force received six F-84E Thunderjet and 238 F-84G Thunderjet as military aid from the US, and formed five new squadrons (726 to 730) at Karup Air Base from 1952 to 1954. The rapid expansion caused problems as neither two-seaters nor flight simulators were available, causing 89 crashed F-84's and 40 pilot casualties. Some casualties were due to the lacking experience in the newly formed air force while others stemmed from the tactics introduced by American WWII and Korean War-veterans based on fast and low flying attacks to avoid anti-aircraft fire.

To avoid further casualties the air force established a training squadron of two-seated T-33As in 1956 to train US-educated pilots to navigate under local weather conditions. Furthermore, squadron 722 was changed to function as rescue squadron in 1956 and was strengthened by seven Sikorsky S-55 helicopters in 1957. Finally, Air Chief Marshal Hugh Saunders from Royal Air Force was employed in 1954 to reorganize the air force which led to the merger of Command East and West, forming Flyvertaktisk Kommando (Air Tactical Command) with the initial mission to lower the number of crashes during training.

In 1962 the Royal Danish Army's four SAM batteries based on Nike missiles were transferred to the air force. They were to defend Copenhagen against Soviet ballistic missiles and high altitude bombers and based as squadron 531 in Gunderød, squadron 532 at Kongelunden on Amager, squadron 533 in Sigerslev and squadron 534 in Tune. In 1965 four batteries of Hawk missiles were deployed close to the Nike batteries to protect them from low altitude aircraft. 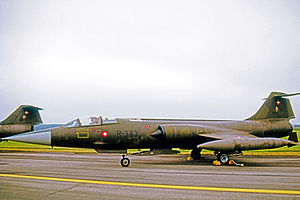 In the 1960s and 1970s the RDAF operated a number of US financed Lockheed F-104G Starfighters, North American F-100D and F-100F Super Sabres, and several other types. In 1971 the Danish army created the Royal Danish Army Flying Service as the first air-unit outside the air force, since its creation in 1950. It had observation helicopters and piston-engined artillery spotting aeroplanes. In 1977 the Danish Naval Air Squadron was extracted from squadron 722 to the Danish navy, and it had ship-based helicopters. In a joint arms purchase four NATO countries: Denmark, Norway, Netherlands, and Belgium introduced the General Dynamics F-16 Fighting Falcon as their common strike fighter in January 1980. The F-16 was later bought by additional NATO countries, Greece and Turkey, and the United States of America, also a NATO member operates the F-16.

In 1982 the number of fighter aircraft was reduced by 12 units. General Dynamics F-16 is introduced to replace initially the F-100 and later the F-104G. The Royal Danish Naval Air Service is strengthened by eight Westland Lynx Mk. 80 from 1980, replacing the Alouette III helicopters. As a supplement to the Greenland-based C-130's the air force purchases three Gulfstream G-III.[13]

In 1990 the Danish Army Air Corps purchases 12 Eurocopter Fennec lightweight attack helicopters to strengthen capabilities to perform expeditionary mission. The helicopters were transferred to RDAF in 2003.

In 1992 during the Yugoslavian civil wars, the RDAF C-130 Hercules aircraft were used for transport of the 900 Danish troops participating in the UN-led mission to the Balkans. In 1996, a C-130 joined the NATO On-Call International Airlift Pool along with a Gulfstream aircraft. The Gulfstreams were replaced by Challenger planes the following year, when the Danish government ordered the three Challengers in current use.

In 1999, following the end of the Cold War, the Danish air force was re-organised to be an "expeditionary" air force, capable of supporting international operations worldwide - but at the same time still being able to uphold its domestic air and seaward defence commitments. The same year, an expeditionary force of 9 F-16s to join the Operation Allied Force is approved in parliament.

In October 2002, a tri-national detachment of 18 Danish, Dutch, and Norwegian F-16 fighter-bombers, with one Dutch KC-10 tanker, flew to the Manas Air Base in Kyrgyzstan, in support of the NATO ground forces in Afghanistan as part of the Operation Enduring Freedom.

In 2004, the older C-130H Hercules fleet of three transport aircraft (bought by the government in 1973) was replaced by three of the more-advanced and stretched C-130J transport aircraft. A fourth C-130J joined in 2007.

In 2005, a modification program (Mid Life Update) was completed on the remaining F-16 aircraft. The modification programme, started in 1995, introduced a new mission computer, colour multifunction displays, and other avionic improvements. Despite the modifications and improvements, the Danish air force is considering the replacement of 30 F-16s with a more advanced fighter. Contenders include the two-seated Boeing F/A-18F Super Hornet, the Lockheed Martin F-35A Joint Strike Fighter and the Eurofighter Typhoon. The decision of the selected type will be announced before the end of June 2015.[14][15] 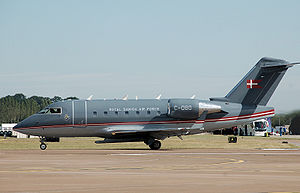 In 2003, 16 H-500 Cayuse and 13 Eurocopter AS550C2 Fennec from the Army Air Corps and eight Westland Lynx Mk. 90B from the Naval Air Squadron were supposed to be transferred to the air force. The 16 Cayuse and 13 Fennec helicopters were transferred to the newly re-formed Danish Squadron 724. The eight Lynx helicopters were supposed to enter another re-formed squadron, Squadron 728, but for political reasons those helicopters remained with the Navy. This change of "ownership" of the naval helicopters became effective on 1 January 2011 when the naval helicopters joined the newly formed Squadron 723. The Danish Defence Acquisition and Logistics Organization (DALO), short listed five helicopters as potential replacements for the Lynx with around 12 new naval helicopters needed. The Sikorsky/Lockheed MH-60R, the NH90/NFH, H-92, AW159 and AW101 were on the short list and a Request For Proposal was issued on 30 September 2010. Ultimately the air force decided to buy nine Sikorsky SH-60 Seahawk helicopters.

In 2005, the 16 Cayuses were decommissioned, an also one of the Fennecs. The remaining 12 Fennecs took over many of the tasks from the Cayuses, including support-functions of the Danish police.

In 2006, the air force signed a letter of intent to purchase several of the Boeing Integrated Defense C-17 Globemaster III. That order needs to be confirmed, but it is to be made on the basis of the formation of a shared NATO C-17 air fleet to support international deployments. Denmark has later withdrawn from this arrangement but it is in existence today. See NATO Strategic Airlift Capability. The United States and the United Kingdom have already bought numerous C-17s, and several other NATO countries are considering doing so, too. In June 2007, Denmark’s six EH101 transport helicopters were transferred to the British Royal Air Force to meet an urgent British requirement for additional transport helicopters.[16] In 2009 six replacement AW101 were delivered to the RDAF from AgustaWestland Yeowil and paid for by the UK.

In June 2010 the Sikorsky S-61 SAR helicopter was withdrawn.

In 2014, RDAF flew F-16 fighter jets in Greenland for the first time, testing the operational capabilities of maintaining sovereignty of the vast arctic airspace.[17]

In 2005 the RDAF requested information about the possible procurement of a replacement for the F-16 fighter aircraft from the producers of the Gripen, Rafale, Eurofighter and Joint Strike Fighter, to which the RDAF has been a partner since 1997. Due to this fact Rafale-producer, Dassault Aviation, decided not to participate in the information round as they considered it to be biased towards the JSF option. This also led to the withdrawal of the Eurofighter in 2007, reentering in 2012. Meanwhile, the Boeing F-18 Super Hornet entered the competition in 2008. After several delays, a request for binding information was sent to the four candidates in April 2014 expecting a final decision in mid-2015.[18][19] 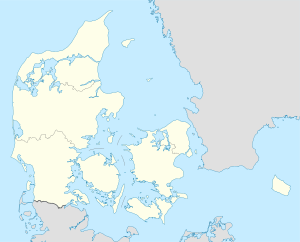 All Danish military aircraft have since the early sixties been registered with a pennant letter and the last three digits from the factory serial number. 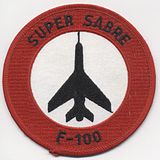 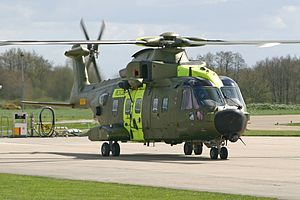 An AW101 heading down the taxi way at Groningen Airport 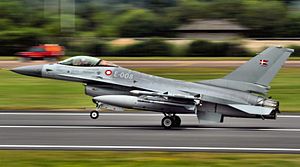 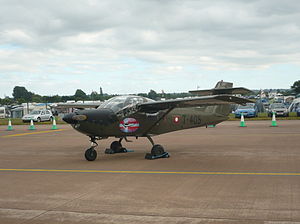 The officer ranks were taken from the Danish army and the insignias were copied from the Royal Air Force with minor differences and are as follows:

The other rank insignia are as follows: