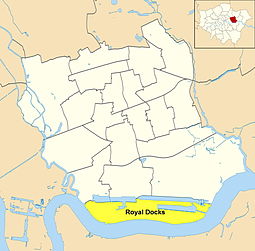 Ward map of Royal Docks within the London Borough of Newham

Not to be confused with the Royal Dock, Grimsby

Royal Docks is an area and a ward in the London Borough of Newham in the London Docklands in East London. The area is named after three docks – the Royal Albert Dock, the Royal Victoria Dock and the King George V Dock. They are more correctly called the Royal Group of Docks to distinguish them from the Royal Dockyards, Royal being due to their naming after royal personages rather than Crown ownership. The three docks collectively formed the largest enclosed docks in the world, with a water area of nearly 250 acres (1.0 km2) and an overall estate of 1,100 acres (4.5 km2). This is equivalent to the whole of central London from Hyde Park to Tower Bridge. The area was designated a special enterprise zone in 2012. North Woolwich is part of Royal Docks ward. 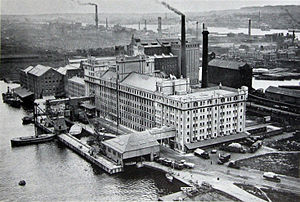 Spiller's Millennium Mills on the south side of the docks, 1934

The three docks were completed between 1855 and 1921 on riverside marshes in East Ham and West Ham (now the London Borough of Newham). The Victoria and Albert docks were constructed by the London & St Katharine Docks Company, to provide berths for large vessels that could not be accommodated further upriver. They were a great commercial success, becoming London's principal docks during the first half of the 20th century. They specialised particularly in the import and unloading of foodstuffs, with rows of giant granaries and refrigerated warehouses being sited alongside the quays. The docks' great size and provision of numerous finger quays gave them a collective span of over 12 miles (19.3 km) of quaysides, serving hundreds of cargo and passenger ships at a time. Following the opening of the Royal Albert Dock in 1880, giving the Royals access to Gallions Reach, 11 miles (17.7 km) below London Bridge, the rival East & West India Docks Company responded with the construction of Tilbury Docks even further down river. The ruinous competition led eventually to all the enclosed docks being taken over by the Port of London Authority (PLA) in 1909. The PLA completed the King George V Dock in 1921 and reserved land to the north for a fourth dock, never built.

The General Strike of 1926 hit the Royal Docks hard, with 750,000 frozen carcasses threatened by the docks' electrical supply being cut off. Fortunately for the dock owners, the Royal Navy were able to save the day by connecting the generators of two submarines to power the warehouses' freezers.

Although the Royal Docks suffered severe damage from German bombing in World War II, they recovered after the war but suffered a steady decline from the 1960s onwards, following the adoption of containerization. Nonetheless, they survived longer than any of the other upstream docks, finally closing to commercial traffic only in 1981. The docks' closure led to high levels of unemployment and social deprivation in the surrounding communities of North Woolwich and Silvertown. 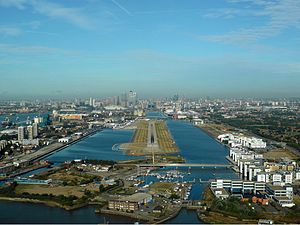 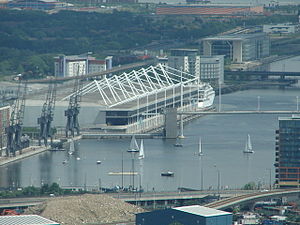 Because of their relative remoteness from central London and poor transport links, the redevelopment of London's Docklands has proceeded more slowly in the Royals than in the other former docks. The London Docklands Development Corporation undertook much work during the 1980s and 1990s to improve local transport and promote new residential and commercial developments in the area. Thousands of new homes were built at Beckton, just north of the Royal Docks, and an extension of the Docklands Light Railway (DLR) opened in 1994 to provide direct links to the City of London and Canary Wharf. This was later extended round the south side of the docks with the link to London City Airport opening in December 2006. The line was later extended to Woolwich. Crossrail will serve the area from 2018.

Several other major projects have been proposed or implemented since then. Many residential complexes have been built; most notably the architecturally progressive Eastern Quay on the south side of Royal Victoria Dock, Capital East on the north side of the dock and the large complex of Gallion's Reach in the extreme east of the Royal Docks. A series of major developments have seen the construction of a new university campus (for the University of East London) and the ExCeL Exhibition Centre, among much else. The Royal Docks have also seen the development of London City Airport (code LCY), opened in 1988 on the quay between the Royal Albert Dock and the King George V dock. While the docks themselves have been preserved largely intact, little remains of the old infrastructure, although some historic warehouses and cranes have been preserved.

In 2011 the one hundred and twenty five hectares of the Royal Docks were granted Enterprise Zone status to help attract jobs and businesses to the area.[1]

In 2014, Singapore listed Oxley Holdings together with leading developer Ballymore UK have a Joint-Venture to set up a new waterfront township of Royal Wharf, with 3385 new homes housing over 10,000. This will be a mixed use development comprising shops, restaurants and even office complexes. 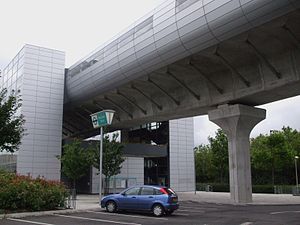 The Docks are served principally by the DLR 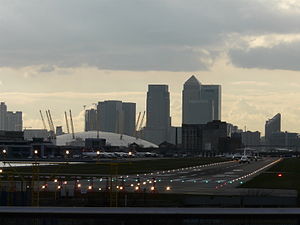 London City Airport, in the heart of the Docks, has been open since 1988

Aside from local bus routes, the area is primarily served by the DLR which goes from Canning Town (services west to Canary Wharf and Central London, and North to Stratford) along the north of the dock to Beckton, and along the south of the dock to North Woolwich and under the Thames to Woolwich Arsenal. Transport for London plan to extend the Beckton branch to Dagenham but this is dependent on funding. The DLR replaced the North London Line services that previously served the area from Canning Town to North Woolwich via Custom House and the 600 m Connaught tunnel beneath the docks.

From 2018 a branch of the Crossrail line will pass beneath the Royal Docks between Canning Town and Woolwich, serving Custom House station (and future provision for a station at Silvertown. Crossrail reuses the southern part of the former North London Line alignment from Custom House to North Woolwich (including the Connaught tunnel built in 1878).[2]

There has also been a need for a further river crossing in the area. A long-standing proposal has been for a four-lane tolled bridge providing a road link between the Beckton and Thamesmead on the south bank: the Thames Gateway Bridge. A public inquiry on the bridge closed in May 2006, it being particularly contentious in the residential neighbourhoods between Plumstead and the Danson Interchange (a junction on the A2). The plans were shelved, along with the DLR Dagenham extension, by Boris Johnson when he came to power in 2008. However, in the run up to the 2012 election Mayor Johnson has started to push for a crossing at Silvertown (the western end of the docks)[3]

The Royal Docks is also home to London City Airport, between the northern and southern docks. It was opened in 1988 to serve the Canary Wharf development and is closer to central London than Heathrow. It is served by a dedicated DLR station and in 2010 London City was the fifth busiest airport in terms of passengers and aircraft movements serving the London area.

Although the docks are now closed for commercial shipping, most of the water area of the docks still exists and is still navigable by craft of all sizes up to and including sizeable ships. The docks' principal use is now water sports, but they do see occasional visits by naval and merchant vessels, especially during the annual London Boat Show and the biannual DSEi arms fair, both of which are held at the ExCeL Exhibition Centre. Cruise ships including Fred Olsen Lines' Braemar (24,300 GT) were moored there during the London 2012 Olympics.

The management of the water areas of the Royal Docks, including locks and bridges, is now the responsibility of Royal Docks Management Authority Limited (RoDMA), which is owned and funded by the owners of the surrounding development land.