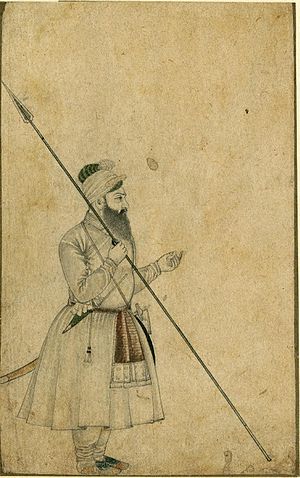 Sawar Khan, one of the Royal Guards of the Emperor Shah Jahan

A Royal Guard describes any group of military bodyguards, soldiers or armed retainers responsible for the protection of a royal person, such as Emperor/Empress, King/Queen, or Prince/Princess. They often are an elite unit of the regular armed forces, or are designated as such, and may maintain special rights or privileges. 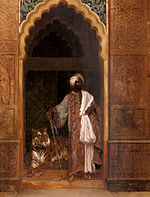 Royal Guards have historically comprised both purely ceremonial units serving in close proximity to the monarch, as well as regiments from all arms, forming a designated substantial elite and intended for active service as part of the army. An example of the first category would include the Tropas de la Casa Real of the Spanish Monarchy prior to 1930, comprising halberdiers and a mounted escort. Examples of the second would include the Imperial Guards of the Russian and German Empires prior to 1917-18.[1]

Monarchs frequently modelled their Royal Guards upon those of fellow rulers. Thus, Napoleon I's Garde Imperiale was imitated by his opponent Alexander I of Russia, his Bourbon successor Louis XVIII and his nephew Napoleon III. The modern Garderegiment Grenadiers en Jagers regiment of the Netherlands and the Escorte Royale of Belgium retain features of uniform and other distinctions that can be traced back to Napoleonic influences.[2]

Because of their location, status, role and nature, Royal Guards have frequently been able to play a political role beyond their intended military and social ones. In times of revolution, the continued loyalty or defection of such units has often played a key part in the outcome of wider unrest. Historical examples were England in 1688, Spain in 1808, Sweden in 1809, France in 1789 and again in 1814-15, Russia in 1917 and Persia in 1906 and again in 1953.[3] 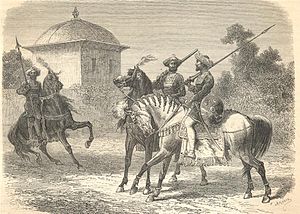 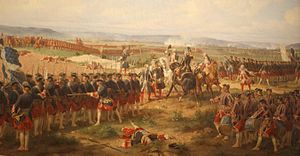 The French Guards at Fontenoy in 1745.