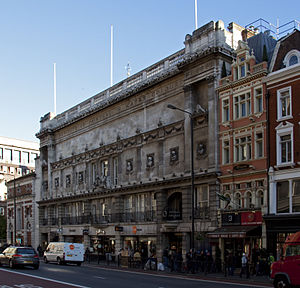 In 1831 the society was founded as the New Society of Painters in Water Colours, competing with the Royal Watercolour Society (RWS), which had been founded in 1804. The founding members were William Cowen, James Fudge, Thomas Maisey (treasurer), O. F. Phillips, Joseph Powell (president), W. B. S. Taylor, and Thomas Charles Wageman. The New Society differed from the RWS in policy, by exhibiting non-members' work also. Both societies challenged the Royal Academy's refusal to accept the medium of watercolours as appropriate for serious art.

In 1839 Henry Warren (1794–1879) became president of the society and was re-elected for many years until he resigned due to failing eyesight.[1] In 1863 there was a name change to the Institute of Painters in Water Colours. In 1883 it acquired its own premises at Piccadilly. In 1885 it added "Royal" to its title by command of Queen Victoria. When the lease to the Piccadilly premises ran out in 1970, it moved to the Mall Galleries, near to Trafalgar Square.