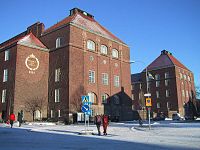 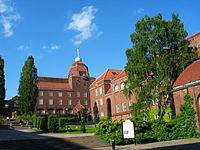 Kerberos guarding the entrance to the courtyard

The Royal Institute of Technology (Swedish: Kungliga Tekniska högskolan, abbreviated KTH) is a university in Stockholm, Sweden. KTH was founded in 1827 as Sweden's first polytechnic and is one of Scandinavia's largest (the largest by certain definitions) institutions of higher education in technology. KTH accounts for one-third of Sweden's technical research and engineering education capacity at university level. KTH offers programmes leading to a Master of Architecture, Master of Science in Engineering, Bachelor of Science in Engineering, Bachelor of Science, Master of Science, licentiate or doctoral degree. The university also offers a technical preparatory programme for non-scientists and further education.[3]

There are a total of just over 14 000 full-year equivalent undergraduate students, more than 1700 active postgraduate students and 4600 full-time-equivalent employees.[4] KTH is one of the leading technical universities in Europe [5][6] and highly respected worldwide, especially in the domains of technology[7] and natural sciences.[8]

The main campus buildings at Valhallavägen in Östermalm, by architect Erik Lallerstedt, were completed in 1917. The buildings and surroundings were decorated by prominent early 20th-century Swedish artists such as Carl Milles, Axel Törneman, Georg Pauli, Tore Strindberg and Ivar Johnsson. The older buildings on the campus went through a complete renovation in 1994. While the original campus was large for its time, KTH very soon outgrew it and the campus was expanded with new buildings. Today KTH institutions and faculties are distributed across several campuses in Stockholm County, located in Flemingsberg, Haninge, Kista and Södertälje in addition to the ones in Östermalm.

The Kista Campus is located in Kista, Stockholm; housing the ICT department of the university. With companies such as Ericsson, Volvo, IBM, Tele2, TietoEnator, Microsoft, Intel and Oracle as neighbors, the cooperation between industry and KTH is widely known. Stockholm University’s computer science programmes are also located in Kista.

School of Technology and Health has a part of its activities in Flemingsberg. At KTH Flemingsberg the school offers courses in Medical Engineering and conducts research within the subject.

KTH's activities in Flemingsberg started in 2002. Since 2003, the school offers a Bachelor of Education in Medical Engineering, in collaboration with the Karolinska Institutet. In the autumn of 2008 a master of science in Medical Engineering started. Beside the undergraduate studies mostly of the research departments is located here and also the research center: Center for Technology in Medicine and Health (CTMH) in which we collaborate with Karolinska Institutet and Stockholm County Council (SLL) for the purpose of contribute to the development and growth of research in engineering, medicine and health.

Flemingsberg is an area of high academic "density" and one of northern Europe's most important areas within biotechnology – both terms of research and industrial activities. Here are also Södertörn University and the Karolinska Institute with over 10 000 students and Novum Research Center, where 1000 people are involved in research.

Flemingsberg is an area of strong growth. To meet the need for student housing more apartments are planned.[9]

Just south of metropolitan Stockholm you will discover a modern campus with reputation for its nice campus area, safe atmosphere and the feeling of togetherness among staff and students.

KTH Haninge holds a large number of courses. For example, the international master programme Architectural Lighting Design is located here, with students from over 20 different countries.

KTH Haninge has a meeting point where the diverse worlds of culture, scientific research and business come together to experience and examine the significance of light and lighting in our daily lives. This is called the Lighting Laboratory.

The campus itself is located near the commuter train, which takes you to Stockholm in just 20 minutes. It is also close to a beautiful archipelago and enjoy the great outdoors in Tyresta National Park.[10]

KTH Södertälje’s education is being constantly developed via a close co-operation with the town’s business community and in particular major Södertälje companies such as Scania and AstraZeneca. Among other things, university engineers in electronics and mechanical engineering are educated here. In addition, KTH also offer various Master's programmes in logistics, project management and product development.

Since the autumn of 2007, the design studio Go Deep KTH at KTH Södertälje has been able to offer product development work via surveys, concept, visualisation and development through design. The idea with Go Deep KTH is to create realistic cooperation projects with companies, public administrations and institutions together with researchers in technology, medicine and health.

At KTH Södertälje, each year Tegelnatten is arranged, a competition whereby students in teams solve a project assignment which lasts for a period of 24 hours. The project assignment for design night 2008 was to provide proposals and ideas as to how future games and competitions will be designed to attract and entice the future generations.

Södertälje offers KTH's students who will be studying at KTH Södertälje a guaranteed apartment in Södertälje. Students who live and study in Södertälje also receive a computer via cooperation with the municipality which they are able to use during the period of time they spend as a student.[11]

KTH was founded in 1827 under the name Technological Institute (Teknologiska institutet), following the establishment of polytechnical schools in many European countries the early years of the 19th century, often based on the model of École Polytechnique in Paris in 1794.

KTH's earliest Swedish predecessor was the Laboratorium mechanicum, a collection of mechanical models for teaching created in 1697 by Christopher Polhem, who is considered to be the father of mechanics in Sweden. The models were used intermittently for teaching practical mechanics by different masters until the School of Mechanics (Mekaniska skolan) was founded in 1798. This is the year from which there has been continuous teaching of technology in Sweden. The activities of the School of Mechanics was taken over by KTH when it was founded.

The institute had one professor of chemistry and one of physics, and one class in mechanical engineering and one in chemical engineering. During the first years, however, teaching was at a very elementary level, and more aimed at craftsmanship rather than engineering as such. The institute was also plagued by conflicts between the faculty and the founder and head of the institute, Gustaf Magnus Schwartz, who was responsible for the artisanal focus of the institute. A governmental committee was appointed in 1844 to solve the issues, which led to the removal of Schwartz in 1845. Instead, Joachim Åkerman, the head of the School of Mining in Falun and a former professor of chemistry at KTH, took over. He led a complete reorganisation of the institute in 1846–1848, after which he returned to his post in Falun. An entrance test and a minimum age of 16 for students was introduced, which led to the creation of a proper engineering training at the institute. In 1851, the course was extended from two to three years.

In the late 1850s, the institute entered a period of expansion. In 1863 the institute received its own purpose-built buildings on Drottninggatan. In 1867 the regulations of the institute were again overhauled, and now explicitly stated that the institute should provide scientific training to its students. In 1869, the School of Mining in Falun was moved to Stockholm and merged with the institute, and in 1871 the institute took over the civil engineering course previously arranged by the Higher Artillery College in Marieberg.

In 1877 the name was changed into the current one, which changed KTH's status from Institute (institut) to College (högskola), and some courses were extended from three to four years. Architecture was also added to the course programme.

In 1915, the degree titles conferred by KTH received legal protection. In the late 19th century, it had become common to use the title civilingenjör (literally "civil engineer") for most KTH-trained engineers, and not just those who studied building and construction-related subjects. The only exception was the mining engineers, which called themselves bergsingenjör ("mountain engineer"). For a while, the title civilingenjör was equal to "KTH graduate" but in 1937, Chalmers in Gothenburg became the second Swedish engineering college which were allowed to confirm these titles.

In 1917, the first buildings of KTH's new campus on Valhallavägen were completed, and still constitute its main campus.

Although the engineering education of the late 19th and early 20th century were scientifically founded, up until the early 20th century, research as such was not seen as a central activity of an Institute of Technology. Those engineering graduates which went on to academic research had to earn their doctorates, typically in physics or chemistry, at a regular university. In 1927, KTH was finally granted the right to confer its own doctorates, under the designation Teknologie doktor (Doctor of Technology), and the first five doctors were created in 1929.

In 1984 the civilingenjör course at all Swedish universities was extended from four to 4.5 years. From 1989, the shorter training in technology arranged by the municipal polytechnical schools in Sweden was gradually extended and moved into the university system, from 1989 as two-year courses and from 1995 alternatively as three-year courses. For KTH, this meant that additional campuses around the Stockholm area were added.

After the American deployment of nuclear weapons at the end of World War II, the Swedish military leadership recognized the need for nuclear weapons to be thoroughly investigated and researched to provide Sweden with the knowledge to defend itself from a nuclear attack. With the mission to "make something with neutrons", the Swedish team, with scientists like Rolf Maximilian Sievert, set out to research the subject and eventually build a nuclear reactor for testing.

After a few years of basic research, they started building a 300 kW (later expanded to 1 MW) reactor, named Reaktor 1, R1 for short, in a reactor hall 25 meters under the surface right underneath KTH. Today this might seem ill-considered, since approximately 40,000 people lived within a 1 km radius. It was risky, but was deemed tolerable since the reactor was an important research tool for scientists at the Royal Swedish Academy of Engineering Sciences (Ingenjörsvetenskapsakademien).

At 18:59 on 13 July 1954, the reactor reached critical mass and sustained Sweden's first nuclear reaction. R1 was to be the main site for almost all Swedish nuclear research until 1970 when the reactor was finally decommissioned, mostly due to the increased awareness of the risks associated with operating a reactor in a densely populated area of Stockholm. The reactor hall remains an amusement to many as once it was next door to what used to be Sweden's first nuclear reactor. Close to the reactor hall is the restaurant Q.

From 2005 KTH is organized into nine schools each consisting of a number of departments:

In 2007, by government initiative, the Swedish National Agency for Higher Education employed an international expert committee to find and award the top five highest quality education areas among all universities and colleges in Sweden. The Royal Institute of Technology received one such "Centre of Excellent Quality in Higher Education" (in Vehicle Engineering). It is the only higher education institution in the Stockholm/Uppsala region to receive an award.[18] In 2009, KTH was the only institution among all Sweden's universities to be awarded Centre of Excellent Quality in Higher Education (in computer science).[19] In 2014/2015 the university was ranked 110th in the world by QS World University Rankings,[20] and it was ranked 33rd in the world for engineering and technology (making it the highest ranked institution in Scandinavia) and 74th in the natural sciences. The 2013-14 Times Higher Education World University Rankings ranked KTH 117th in the world. KTH is ranked as the 34th best university worldwide in the field of engineering and technology. It is also 13th among the world’s technical universities, and 6th among Europe’s.[21]

Many prominent students have graduated from KTH, including;