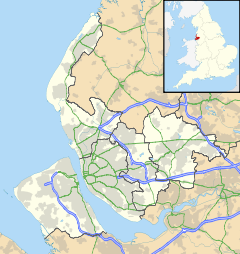 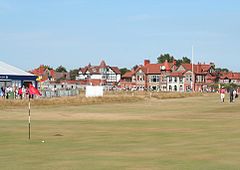 The 3rd hole at The Open Championship
in 2006, the opening hole (Course)
for club members

The Royal Liverpool Golf Club is a golf club in Wirral in England. It was founded in 1869 on what was then the racecourse of the Liverpool Hunt Club and received the "Royal" designation in 1871 due to the patronage of the Duke of Connaught of the day, one of Queen Victoria's younger sons. Robert Chambers and George Morris (younger brother of Old Tom Morris) were commissioned to lay out the original course, which was extended to 18 holes in 1871. Harry Colt, one of the world's leading golf course architects, redesigned the course early in the 20th century, and it has since been tweaked periodically, mainly as a response to advances in equipment.

Royal Liverpool Golf Club is located in the small town of Hoylake, at the northwest corner of the Wirral Peninsula. The golf course extends between Hoylake and the neighbouring town of West Kirby, to the southwest. It has a single 18-hole course, which is a seaside links.

The Open Championship was held at Royal Liverpool in 2006 for the first time since 1967. The course's routing was changed slightly for the championship, with play starting on the club's 17th hole and concluding at the par-5 16th hole.

Royal Liverpool has a long and distinguished history of golfing firsts. It was originator and host to the inaugural men’s amateur championship in 1885, which became The Amateur Championship. It was host to the first ever international match between Scotland and England in 1902. It hosted the first Home International matches, and the first transatlantic contest between Great Britain & Ireland and the USA in 1921, an event which became the Walker Cup the following year. In fact, it is Royal Liverpool Golf Club's contribution to the amateur game that has set it apart from all other clubs in England. Although, at the end of the nineteenth century, it was the Royal and Ancient Golf Club of St Andrews that took on the role of the governing body in golf as the game developed, it was at Royal Liverpool that the rules of amateur status were laid down.[citation needed] The Open at Royal Liverpool was also the scene of the second leg of Bobby Jones' historic Grand Slam in 1930.

The history of Royal Liverpool would not be complete without mention of two of the club's most famous sons, Harold Hilton and John Ball. Between them they dominated the amateur game of their era, and the pair were also a major influence on the professional game, each of them winning the Open Championship as amateurs. Ball won the Amateur Championship eight times between 1888 and 1912, and was runner-up twice.[2] The venerable Ball competed in the Amateur Championship as late as 1921 when Royal Liverpool hosted the event.[3] He won the Open Championship in 1890,[2] the first Englishman and the first amateur to do so, and also took the Amateur title the same year.

Harold Hilton's record was just as impressive. He won the Open twice, in 1892 (the first year the Open was played over 72 holes) and again five years later, making him the only amateur apart from John Ball and Bobby Jones to win the title.[2] His victory at Hoylake in 1897 was marked 100 years later by the creation of a new, annual Harold Hilton Medal tournament open to amateur golfers aged 30 or more and handicap five or less. Hilton also won the Amateur Championship four times, was runner-up on three occasions, and won the U.S. Amateur Championship in 1911, the year in which he also held the British title. This feat made him the first to hold both major amateur titles simultaneously. In the same year he still found time to become the first editor of the new Golf Monthly magazine.

Character of the course

Many comments have been made over the years about the quality and toughness of the links. The legendary golf writer Bernard Darwin's quote: "Hoylake, blown upon by mighty winds, breeder of mighty champions" highlights one of the course's key defences. The wind was conspicuous by its absence during the benign Open week in 2006. However, such was winner Tiger Woods' respect for the need for strategic play that he only hit his driver once during the tournament, with the course baked out due to dry conditions, and playing very fast. The course is mostly level, but the holes nearest the coast run through sandhills.

The course has also hosted a number of professional tournaments on the European Tour and before its foundation in 1972. Royal Liverpool has been the site for many tournaments for ladies, seniors, and boys, and various regional and representative events. It hosted The Open Championship for the first time in 39 years in 2006; Tiger Woods won his third Open Championship, two strokes ahead of runner-up Chris DiMarco. It was an emotional victory for Woods, who had lost his father to prostate cancer just two months earlier.

Royal Liverpool hosted the 2010 English Men's Open Amateur Stroke Play Championship for the Brabazon Trophy from 24–27 June 2010; the event was won by Darren Wright. The links had earlier staged the Brabazon on four occasions. In 1961, Ronnie Shade was champion, followed in 1972 by Peter Moody, a former University of Cambridge captain. Sandy Lyle lifted the trophy in 1977, while the 1989 event saw a tie between Craig Rivett from South Africa and Neil Roderick from Wales.

Royal Liverpool hosted the Women's British Open for the first time in 2012, from 13–16 September. It was held seven weeks later than usual, to avoid conflict with the 2012 Summer Olympics in London. The Women's British Open was first staged in 1976, and it gained status as a major championship on the LPGA Tour in 2001. The 2012 Women's British Open was won by South Korea's Jiyai Shin with a dominant display in tough conditions. She won by 9 strokes to set a new record for the largest winning margin in this event. In doing this she scored a 64 in her second round to set a new Ladies Course Record and a score that was the lowest seen at Royal Liverpool in a major championship event. The previous record had been held by Tiger Woods, Ernie Els, Sergio Garcia and Chris DiMarco who all scored 65s during the 2006 Open Championship.

The twelve winners of The Open Championship at Royal Liverpool Golf Club: