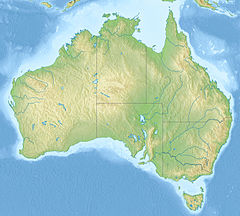 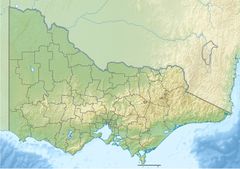 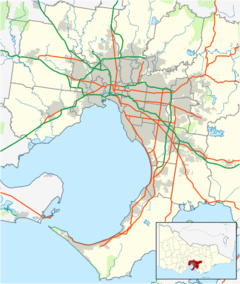 Royal Melbourne Golf Club is a 36-hole golf club in Australia, located in Black Rock, Victoria, a suburb southeast of Melbourne. Its West and East courses are respectively ranked number 1 and 6 in Australia.[1][2] The West course is ranked in the top ten courses in the world (or outside the United States).[3][4] Founded 131 years ago in 1891, it is Australia's oldest extant and continually existing golf club.[5] The Royal Melbourne Golf Club has a capacity for 15,000[6] spectators.

Royal Melbourne has hosted numerous national and international events. Its 16 Australian Opens are surpassed by only the 17 hosted by The Australian Golf Club. It hosted the 1959 Canada Cup (now Mission Hills World Cup), and the 1970 World Cup. Royal Melbourne hosted the 1988 Australian Bicentennial tournament. It was selected by the PGA Tour to hold the Presidents Cup, for the first time outside the United States, in December 1998. The match was convincingly won by the International team, captained by Peter Thomson, who had himself earlier served as the Club professional at Royal Melbourne. The course hosted the Presidents Cup again in November 2011, won by the United States.[7] The course also hosted the Women's Australian Open for the first time in February 2012, now an LPGA Tour event.

The club had to give up its original site, much nearer the city centre, because of increasing urbanization. It planned a move to its present location in the mid-1920s. Royal Melbourne's two current courses are known as the 'West' and 'East' courses.[8] The West course was designed under the strict standards of famous course architect Alister MacKenzie.[9] He visited the eventual site, located on the renowned Melbourne Sandbelt, south of the city, in 1926. The actual building of the West course was overseen by the famed Australian golfer Alex Russell, as well as the head greenkeeper Mick Morcom; it was completed for play in 1931, and required much clearing of forested land. The East course was designed by Russell, and was completed in 1932.[9][10]

The East course is the lesser of the courses with fewer noteworthy holes, but is still held in very high regard. The West course has several world-class holes but they are not long compared to current standards for championship par 4s and 5s. The course is strictly landlocked by existing boundaries. During recent restoration of the West course (and East course Composite holes) in preparation for the 2011 Presidents Cup, fairway grasses were changed to restrict the progress of the golf ball, particularly given the lack of length of the par 5 holes.