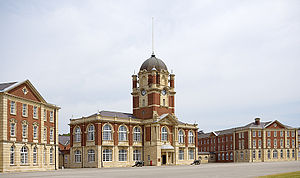 The Royal Military Academy Sandhurst (RMAS), commonly known simply as Sandhurst, is the British Army's initial officer training centre and is located in the town of Camberley, near the village of Sandhurst, Berkshire, about 55 kilometres (34 mi) southwest of London. The Academy's stated aim is to be "the national centre of excellence for leadership." All British Army officers, including late-entry officers who were previously Warrant Officers, as well as other men and women from overseas, are trained at Sandhurst. The Academy is the British Army equivalent of the Britannia Royal Naval College Dartmouth, Royal Air Force College Cranwell, and the Commando Training Centre Royal Marines.

Despite its name, The Royal Military Academy Sandhurst is actually located in Camberley, although the boundaries of the academy straddles the counties of Berkshire and Surrey; the county border marked by a small stream known as the Wish Stream, after which the Academy journal is named. The main entrance is located on the west of the Academy, leading to Camberley town centre. The nearest railway station is Camberley. 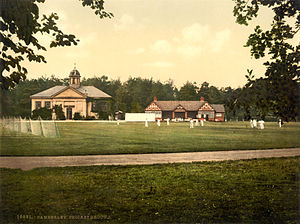 The first Military Academy had been established in 1720 at Woolwich, a town later absorbed into south-east London, to train cadets for commissions in the Royal Artillery. Known as the "Shop", this academy moved to a permanent site at Woolwich Common in 1806 and was granted royal status in 1841. In 1806, the Military Academy took on the training of Royal Engineers officer cadets and, later, Royal Signals cadets. 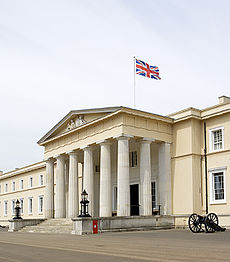 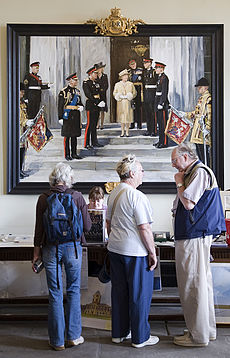 The Royal Military Academy Sandhurst was formed in 1947 on the site of the former Royal Military College from a merger between it and the Royal Military Academy in Woolwich, which trained officers for the Royal Artillery and Royal Engineers from 1741 to 1939.[9] Following the ending of National Service in the UK and the closing of the Mons Officer Cadet School in Aldershot (which had trained Short Service Commissioned Officers) in 1972, the RMAS became the sole establishment for male initial officer training in the British Army.[10] In 1984, the Women's Officer Training College Bagshot moved to Sandhurst and in 1992 a new Commissioning Course finally unified the training of male, female and foreign cadets.[1]

For the 1948 Summer Olympics in London, the newly created Academy hosted the running leg of the modern pentathlon competition.[12]

Training at Sandhurst was the subject of a three part television series, first broadcast by BBC television in October, 2011, and rebroadcast in April 2012.

In 2012 Sandhurst accepted a £15 million donation from the government of United Arab Emirates for the Zayed Building, an accommodation block, named after the UAE's founding ruler.[13] In 2013 Sandhurst accepted a donation of £3 million from the government of Bahrain for the refurbishment of Mons Hall, named in honour of the men who fell in the Battle of Mons, which was then controversially renamed King Hamad Hall in honour of the King of Bahrain.[13][14]

In 2015 Sandhurst appointed Lucy Giles as the first female college commander in its history.[15]

Potential officers are identified by the Army Officer Selection Board (formerly the Regular Commissions Board, or RCB) situated in Westbury in Wiltshire.[16] Nearly 10 percent of British cadets are female and nearly 10 percent of all cadets come from overseas. More than eighty percent of entrants are university graduates although a degree is not required for admission.[17] Some officer cadets are serving soldiers. Technically, all cadets have the rank of Officer Cadet 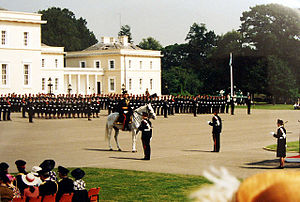 Passing out parade
File:Inspection-New-Colours.JPG
New Colours are presented to RMAS, June 2005. Prince Harry (at attention, to left of horse) is on parade.

Sandhurst develops leadership in cadets by expanding their character, intellect and professional competences to a level demanded of an Army Officer on first appointment through military training and education.[18] The course is accredited by various academic and professional institutions.[18] The Commissioning Course lasts 44 weeks and must be successfully completed by all British regular army officers (with some exceptions) before they receive their commission. It is usually followed by further training courses specific to the Regiment or Corps in which the officer will serve.

There are two shorter commissioning courses. One is for professionally qualified officers (e.g., doctors, dentists, nurses, lawyers, pharmacists, veterinarians and chaplains).[19] The second short course is Module 4 of the Army Reserve (AR) Commissioning Course (ARCC), which lasts three weeks. The ARCC consists of four training modules; the first three are conducted under the supervision of RMAS with University Officer Training Corps, with Module 4 of the Officers' training and assessment being conducted at Sandhurst. This training typically takes 2 years to complete. Upon completion, Officer Cadets become Second Lieutenants in the AR or Officer Training Corps (OTC).[20] Each year, approximately 140 candidates undertake each of these two short courses.[1]

Sandhurst also runs a variety of other courses for officers including the Late Entry Officer Course (LEOC).[21]

RMAS has an academic faculty staffed by civilian researchers with expertise in Communication and Applied Behavioural Science, Defence and International Affairs and War Studies.[22]

Unlike some other national military academies such as West Point in the United States, Ecole Spéciale Militaire de Saint-Cyr in France and the Pakistan Military Academy in Pakistan, Sandhurst is not a university.[23]

In overall command of the RMAS is the Commandant of the Academy, usually an officer of Major General rank. The senior warrant officer, the Academy Sergeant Major (AcSM), is one of the most senior warrant officers in the British Army. The commissioning course is split up into three terms, each lasting fourteen weeks (referred to as the Junior, Intermediate and Senior Divisions, identified by differently coloured lanyards). Basic army training is covered in the first five weeks which, by reputation, are the most gruelling (cadets' families are encouraged to support the cadets' morale by maintaining home contacts). The main RMAS Commissioning Courses start in January, May and September of each year. Each intake numbers approximately 200 cadets, each of whom is assigned to a platoon within one of two companies. Platoons are commanded by captains, with a colour sergeant who takes the main burden of day-to-day training, especially during the first term (unlike West Point, RMAS entrusts the majority of officer training to Senior Non-Commissioned Officers). There can be as many as ten companies within the RMAS at any one time, each commanded by a Major and named after a famous battle or campaign in which the British Army has fought. The company names change from year to year, and are drawn from the following:

Dettingen Company is divided along the same lines as the regular intakes, though smaller courses may consist of only two platoons.

There is also a "rehabilitation" platoon — Lucknow Platoon. It looks after cadets who are injured during training, with a view to preparing them to re-enter the commissioning course at the point they left, or processing those who are medically discharged.

Cadets who fail to meet the required standard may be "back-termed", that is, "asked" to repeat the previous term and joining a later intake, or to repeat the whole course.

Cadets nominate two regiments or corps that they seek to join, although in practice this may be influenced by their instructors, if particular strengths or weaknesses or aptitudes are seen to be important. In the middle term, interviews are held and final selections are made by the recruiting regiments and corps; there is competition for strong cadets by the units and, conversely, by cadets for prestigious or specialised units. Exceptionally, some cadets may have confirmed places in regiments before the formal selections or even before starting at Sandhurst. 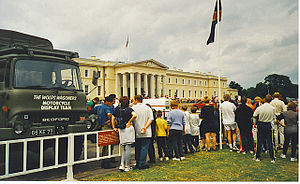 A small number of regular army units are based at the RMAS to provide support for the colleges and their training:

File:Oldcollegesandhurst2.jpg
The 149th Sovereign's Parade in front of Old College.

The first Sovereign's Parade was performed on 14 July 1948, in front of King George VI. Three Sovereign's Parades are held each year outside the Old College to mark the "passing-out" and the final parade at Sandhurst of the Senior Division. All cadets, except for those who have been back-termed through injury or other reasons, are inspected by the Sovereign (or her representative), participate in the Trooping the Colour and parade past the Sovereign (or her representative) and guests. Guests consist of invited dignitaries and friends and families of the graduating cadets.[1]

At the end of the Parade, the Colours and the Senior Division leave the parade ground via the Grand Steps of the Old College building. They are followed by the College Adjutant, on horseback (the origins of this tradition are unclear).[1]

Each Commissioning Course has awards granted to outstanding cadets.[25] The following awards are presented during the Sovereign's Parade. Others are merely listed in the Parade programme. A system of Cadet Government also recognises merit by the appointment of Senior Under Officers, Junior Under Officers, Cadet Sergeants and Cadet Corporals.[1]

The Sword of Honour is awarded to the British Army Officer Cadet considered by the Commandant to be, overall, the best of the course. The swords were formerly made by Wilkinson Sword but after the closure of their sword making division they are now presented by Pooley Sword who also present swords for the Royal Marines and Royal Air Force. During the Second World War, when abbreviated courses were run to increase the supply of new officers, a Belt of Honour was awarded instead.

The Queen's Medal is awarded to the British Army Officer Cadet who achieved the highest scores in military, practical and academic studies. 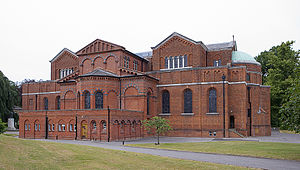 The Overseas Award is the equivalent of the Queen's Medal for Overseas Cadets and is awarded to the Overseas Officer Cadet who achieved the best overall results in military, academic and practical studies.

The Duke of Westminster's Sword is awarded to the officer cadet considered by the Commandant to be, overall, the best of the Army Reserve Commissioning Course. This sword is also donated by Pooley Sword.

There are two Chapels within the Academy, The Roman Catholic Chapel (Christ the King) and The Royal Memorial Chapel, dedicated as Christ Church, which also contains the South Africa Chapel, which was originally the sanctuary of the second Chapel before the it was enlarged. The original chapel was what is now known as the Indian Army Memorial Room. The Royal Engineers designed the original Chapel, which features red brick, terracotta moulding, interlocking pediment copies and corbels in 1879. The Chapel was dedicated by King George VI on 2 May 1937, after architect Captain Arthur C. Martin enlarged the building in a Byzantine style. The Memorial stained glass and Windows in the chapel honour the Brigade of Guards, Rifle Brigade, Royal Fusiliers, and the Hampshire Regiment, among other units. Some memorials, including one honouring alumni of the US Military Academy at West Point, are carved into the black marble flooring.[26] On panels devoted to the particular campaigns in which they lost their lives, are the names of former cadets killed in action. At intervals above the panels are circular tablets to the memory of College Governors. The names of former cadets who have died on active service in the field, or elsewhere are listed in the spaces between the panels. Other tablets on the walls of the porch of the Church were moved there from the old Chapel. At the nave near the chancel steps, old Regimental colours hang from the pillars.[27]