The Royal Military College (RMC), founded in 1801 and established in 1802 at Great Marlow and High Wycombe in Buckinghamshire, but moved in October 1812 to Sandhurst, Berkshire, was a British Army military academy for training infantry and cavalry officers of the British and Indian Armies. 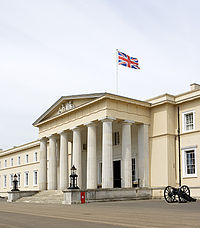 The Royal Military College was conceived by Colonel John Le Marchant, whose scheme for establishing schools for the military instruction of officers at High Wycombe and Great Marlow first met strong resistance on the grounds of cost. However, in 1801 Parliament voted a grant of £30,000 for it,[1] and in 1802 Le Marchant, appointed as the first Lieutenant Governor of the College, opened its Junior Department at a large house in West Street, Great Marlow,[2][3] to train Gentleman Cadets for the infantry and cavalry regiments of the British Army and for the Presidency armies of British India,[4][5] 1802 was the same year as the founding of the French Army's Saint-Cyr[6] and of West Point in the United States.[7] General Sir William Harcourt was appointed as the first Governor of the Royal Military College at Great Marlow[8] and continued in post until 1811.

In 1799, a school for staff officers had been established at High Wycombe, and in 1801 this became the Senior Department of the Military College.[5]

In 1812, the College's Junior Department moved from Great Marlow into purpose-built buildings at Sandhurst designed by James Wyatt,[9] and was soon joined there by the Senior Department, migrating from High Wycombe. In 1858 this became a separate institution, the Staff College.[5]

On the outbreak of the Second World War, many of the cadets and staff of the Royal Military College were mobilised for active service, but the buildings at Sandhurst remained the home of the RMC's 161 Infantry Officer Cadet Training Unit. In 1942, this unit moved to Mons Barracks, Aldershot, and for the rest of the war the Sandhurst campus was used as a Royal Armoured Corps Officer Cadet Training Unit.[10]

The most notable cadets of RMC Sandhurst include: