The Royal Military School of Music (RMSM) in Twickenham, west London, trains musicians for the British Army's twenty-two bands. It is part of the Corps of Army Music. The school is based at Kneller Hall, which was the country house of the court painter Sir Godfrey Kneller and was rebuilt after a fire in 1848. 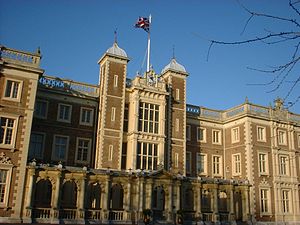 The RMSM was established in 1857[1] at the instigation of Prince George, Duke of Cambridge, Queen Victoria's cousin and the commander-in-chief of the army. In 1854, during the Crimean War, he had attended a parade in Scutari, in Turkey, to celebrate the Queen's birthday. During the parade the approximately twenty British Army bands on parade were required to combine in a performance of the national anthem. The custom, at this time, was for regiments to hire civilian bandmasters for their bands, each of whom had free rein in both the instrumentation of the band and the arrangements it played. With each band playing God Save the Queen simultaneously in different instrumentations, pitch, arrangement, and key signatures, the result was an embarrassing and humiliating cacophony.[2] The Duke decided that there should be some standardisation in army music and so formed the RMSM, with Henry Schallehn (who also became the first director of music at the Crystal Palace) as commandant. For many years the commandant was Colonel T. B. Shaw-Hellier, owner of the Hellier Stradivarius.

The school is open to men and women, and the commitment to the army is for a minimum of four years. The Corps of Army Music is the largest employer of musicians in the United Kingdom, and it promotes itself to potential recruits as an opportunity to earn a salary as a musician, something which can be hard to do. The music taught and performed is not restricted to martial music, but also includes jazz, swing, middle-of-the-road, popular, baroque, mainstream symphonic and operatic music.

The Museum of Army Music at Kneller Hall features a collection of musical instruments, music, banners, medals, model bands, documents, prints, manuscripts, paintings and uniforms showing the history of military music. It is open to the public Wednesday afternoons and by appointment.[3][4]