The Royal Mint is the body permitted to manufacture, or mint, the coins of the United Kingdom. The Royal Mint originated over 1,100 years ago, producing coins for England and eventually Great Britain. Since 2010 it has operated as Royal Mint Ltd, a company owned by HM Treasury, under an exclusive contract to supply all coinage for the UK.[1] Royal Mint Ltd is 100% owned by HM Treasury, though the latter delegates shareholder responsibilities to the Shareholder Executive.

As well as minting coins for the UK, The Royal Mint also mints and exports coins to many other countries and produces military medals, commemorative medals, and other such items for governments, schools and businesses, being known as the world's leading exporting mint.[1] Responsibility for the security of the site falls to the Ministry of Defence Police, who provide an armed contingent.

In 1968 The Royal Mint began to move its operations from Tower Hill in the City of London to Llantrisant, Mid Glamorgan, Wales, and has operated on a single site in Llantrisant since 1980.[2] At Llantrisant it holds an extensive collection of coins dating from the 16th century onwards, housed in eighty cabinets made by Elizabeth II's cabinet maker, Hugh Swann. The site occupies 38 acres (15 ha) and employs over 900 people.[3]

The annual Trial of the Pyx assays coins produced for the UK government for size, weight and chemical composition.

The London Mint first became a single institution in 886,[4] during the reign of Alfred the Great, but was only one of many mints throughout the kingdom. By 1279 it had moved to the Tower of London, and remained there the next 500 years, achieving a monopoly on the production of coins of the realm in the 16th century. Sir Isaac Newton took up the post of Warden of the Mint, responsible for investigating cases of counterfeiting, in 1696, and subsequently held the office of Master of The Royal Mint from 1699 until his death in 1727. He unofficially moved the Pound Sterling to the gold standard from silver in 1717. 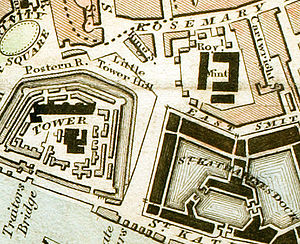 The Royal Mint moved from the Tower of London to new premises c.1809 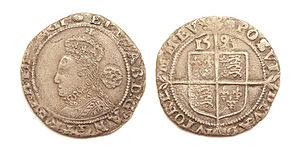 Silver Sixpence, struck in 1593 under Queen Elizabeth I, Royal Mint, (Tower of London).

By the time Newton arrived, the Mint had expanded to fill several rickety wooden buildings ranged around the outside of the Tower. In the eighteenth century the processes for minting coins were mechanised and rolling mills and coining presses were installed. The new machinery and the demand on space in the Tower of London following the outbreak of war with France led to a decision to move the Mint to an adjacent site in East Smithfield. The new building, designed by James Johnson and Robert Smirke, was completed in 1809, and included space for the new machinery, and accommodation for the officers and staff of the Mint. 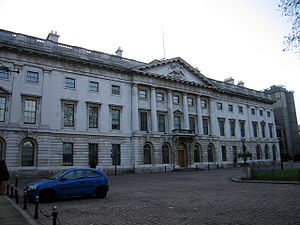 The Royal Mint building of the 1880s

The building was rebuilt in the 1880s to accommodate new machinery which increased the capacity of the Mint. As technology changed with the introduction of electricity and demand grew, the process of rebuilding continued so that by the 1960s little of the original mint remained, apart from Smirke's 1809 building and the gatehouse in the front.

The Tower Hill site finally reached capacity ahead of decimalisation in 1971, with the need to strike hundreds of millions of new decimal coins, while at the same time not neglecting overseas customers. In 1967 it was announced that the mint would move away from London to new buildings in Llantrisant, ten miles (16 km) north west of Cardiff. The first phase was opened by Queen Elizabeth II on 17 December 1968, and production gradually shifted to the new site over the next seven years until the last coin, a gold sovereign, was struck in London in November 1975. Smirke's 1809 Building is now used as commercial offices by Barclays Global Investors.

On 1 April 1975 The Royal Mint became a trading fund to help improve its efficiency by requiring it to become self-financing.

In March 2009, the then Chancellor of the Exchequer, Alistair Darling began planning to sell off of The Royal Mint.[6] On 31 December 2009 it ceased to be an executive agency and its assets were vested in a limited company, Royal Mint Ltd. The owner of the new company became The Royal Mint trading fund, which itself continued to be owned by HM Treasury.

Role of The Royal Mint

The Royal Mint exists principally to mint coins for circulation in the UK. However, it also manufactures and circulates coins for over 60 other countries,[1] mints collectors' coins, and produces military medals and civilian decorations for the British armed forces and orders of chivalry. As of 2013, The Royal Mint produces approximately 15% of the world's coin based currency.[7] From the 1970s to 2009, it produced all Order of the British Empire Insignia, this is now contracted out to companies with a royal warrant of appointment, such as Toye, Kenning & Spencer Ltd. The Royal Mint in London also produced coins for Canada until a branch was opened in Ottawa, Canada in 1908. In 1931, control of the Canadian branch mint was passed to the Canadian government and it then became the Royal Canadian Mint.

Trial of the Pyx

The Trial of the Pyx is the procedure in the United Kingdom for ensuring that newly-minted coins conform to required standards. The trials have been held since the twelfth century, normally once per calendar year, and continue to the present day. The form of the ceremony has been essentially the same since 1282. They are trials in the full judicial sense, presided over by a judge with an expert jury of assayers. Trials are now held at the Hall of the Worshipful Company of Goldsmiths, having previously taken place at the Palace of Westminster[8] Given modern production methods, it is unlikely that coins would not conform, although this has been a problem in the past as it would have been tempting for the Master of the Mint to steal precious metals.

The term "Pyx" refers to the boxwood chest (in Greek, πυξίς, pyxis) in which coins were placed for presentation to the jury. There is also a Pyx Chapel (or Pyx Chamber) in Westminster Abbey, which was once used for secure storage of the Pyx and related articles.

Coins to be tested are drawn from the regular production of The Royal Mint. The Deputy Master of the Mint must, throughout the year, randomly select several thousand sample coins and place them aside for the Trial. These must be in a certain fixed proportion to the number of coins produced. For example, for every 5,000 bimetallic coins issued, one must be set aside, but for silver Maundy money the proportion is one in 150.

The jury is composed of Freemen of the Company of Goldsmiths, who assay the coins provided to decide whether they have been minted within the criteria determined by the relevant Coinage Acts.[10]

The following are among the chief engravers at The Royal Mint: