The Royal National Mòd (Scottish Gaelic: Am Mòd Nàiseanta Rìoghail) is the most important of several major Mòds that are held annually, mostly in Scotland. It is the main festival of Scottish Gaelic literature, song, arts and culture, and one of the more notable peripatetic cultural festivals in Scotland. It is often referred to simply as the Mòd.

The Mòd is run by An Comunn Gàidhealach (The Gaelic Association), and includes competitions and awards.

The Mòd was founded by An Comunn Gàidhealach. St Columba's Church, Glasgow also greatly influenced the Mòd's inception when, in 1891, its choir was invited to give a Gaelic Concert in Oban, presided over by Lord Archibald Campbell.[1] The concert was attended by much of the nobility, including Louise, Princess Royal and Duchess of Fife. After the Concert the Choir were entertained to supper at the Alexandra Hotel, and a description of the entertainment is given in one of William Black's novels.[1] This concert was the prelude to the Gaelic Mòd, the first being held at Oban the following year, when St. Columba Choir were successful in the Choir competition.[1]

The Mòd has been held most years in October since 1892. The only years in which the National Mòd was not held were the war years of 1914-1919 and 1939-1946. The "Royal" was not originally part of the name. It is still the practice of the St Columba's Church to send a Concert Party to start off the fund-raising when the Mòd visits Oban. As well as winning the premier Choir competition for the first three years, the church has also had many Mòd Gold Medallists over the years.

The Mòd itself has been greatly influenced by the National Eisteddfod of Wales, although it tends to be somewhat more restrained in its ceremonial aspects.

The Mòd largely takes the form of formal competitions. Choral events and traditional music including Gaelic song, fiddle, bagpipe, clarsach and folk groups dominate. Spoken word events include children and adult's poetry reading, storytelling and Bible reading, and categories such as Ancient Folk Tale or Humorous Monologue. Children can also present an original drama, and there are competitions in written literature. The Mòd also runs an annual shinty competition, the Mòd Cup, between the two shinty teams closest to the place where the Mòd is taking place.

The winners of each day's competitions are invited to perform in the winners' céilidhs held every evening.

The Mòd is a celebration of [Scottish] Gaelic language and culture,[2] which raises the profile and contributes towards the aim of securing its future.[3]

Improvements in the provision of Gaelic-medium education across Scotland has meant that by 2007 the junior native speakers' section had increased to such an extent that the organisers were forced to extend some of the competitions beyond one day.[4]

Culturally, the Mòd is comparable to the Welsh Eisteddfod. 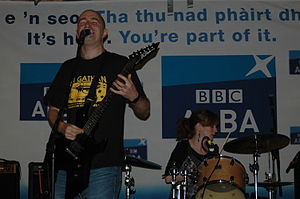 The Mòd draws a large crowd, which leads local venues to put on various events in addition to the official Mòd events. These events are collectively referred to as The Mòd Fringe, analogous to the Edinburgh Festival Fringe, which began as a group of independent artists performing in Edinburgh at the same time as the Edinburgh International Festival.

To participants, the Mòd is also an opportunity to meet with old friends and make new ones. The Mod is popularly known as the "Whisky Olympics",[3] considered "either a vicious slur or fair comment".[5]

Past and future festivals

The Mòd is held each October, and has been held in the following locations throughout Scotland, both Highland and Lowland.

These are the host locations to date:[6]

The nearest following Mòds are to be held:[6]

The southernmost host location is Ayr, the easternmost Aberdeen and the northernmost is Thurso. As can be seen from the list, certain locations are more favoured. Areas with large amounts of hall space and accommodation are favoured.

Some notable areas of Scotland that have never been visited by the Mòd include Arran, Islay (which has a significant Gaelic-speaking population in the southern Hebrides), Dumfries and Galloway, Fife, Angus, most of North East Scotland, Loch Lomond-side etc.

The Mòd has never been to the Borders or the Northern Isles, but there is little connection between these areas and the Gaelic language.