The Royal Navy Police (RNP) is the service police branch of the Royal Navy and Royal Marines.[1] Members of the RNP enforce law, discipline, and maintain order as outlined in the Armed Forces Act 2006.

The RNP subsumed the Royal Marines Police in 2009, although for operational purposes the majority of the two cadres of personnel are employed within their respective areas of the service. The RNP provide a Troop strength unit of Royal Marines to 3 Commando Brigade to provide policing services as part of the UK Landing force.

The motto of the RNP is "Ne Cede Malis" which translates from Latin into English as 'Do not yield to adversity' or 'Do not give in to evil'.

The RNP is the smallest of ll police branches in the three services, with its provost marshal holding the rank of commander.[4][5]

The Royal Navy has always, in one way or another, had the need to maintain order and discipline. When at sea, historically, the captain was the king's representative, his rule was kept by the first lieutenant, who was assisted by a person known as thee Ship's Marshal, who was supported by a number of ship's corporals. Ship's marshals were abolished and replaced by the master at arms (M.A.A.) rate, which was introduced in about 1699, a tradition that continues right up to the present day.

On punishment day, at six bells in the forenoon watch, the order was given,"All hands to witness punishment". The master at arms presented the offender to the captain, who questioned him about the offence and then delivered a verdict. The officer of the offender's division was asked if he had anything to say in mitigation. If their reply did not satisfy the captain, he ordered the man's punishment. Other than the actual act of flogging; the M.A.A. was responsible for ensuring that any punishment awarded was carried out. The M.A.A. was also accountable to the lieutenant at arms for the duties of the ship's corporals, the supervision of sentries, the guard, and training the ship's company in the use of small arms. Another duty that the M.A.A performed was, at around 9 pm, to patrol the ship and check that all lanterns and fires were out, and that no men were intoxicated. Probably an early form of evening rounds.

In September 1944, the Admiralty concluded that the organisation for the maintenance of discipline on shore in the main naval port areas was unsatisfactory. Colonel D H C Shepherd (Royal Marines), previously the naval provost marshal in Malta, carried out a study into the requirement for a naval provost organisation. He reported that the system of landing ships' patrols in major naval base areas was unsatisfactory because the petty officers and leading ratings in charge, (however well briefed) lacked the knowledge and experience to deal with incidents, and being unable to render lucid written reports, avoided taking action wherever possible. The men detailed for patrol disliked the duty intensely believing it to be a form of punishment.

The Shepherd report recommended the introduction of a leading patrolman rating to become the junior member of the Regulation Branch and borne primarily for provost duties, and the creation of a provost organisation to operate within the major naval port areas. Admiralty Fleet Order 6681/44 of 21 December 1944 implemented the proposals of the Shepherd report.

As a result of the Shepherd report, regulating branch training, which hitherto had been carried out in the barracks of the main ports, was centralised. In 1945, a Royal Navy Regulating School was established at Beechwood Camp in Devon to train all regulating ratings and to maintain branch records. In 1946, the school moved to Fort Wallington near Portsmouth, then in 1947 to HMS Cicero in Essex, then in 1948 to HMS Excellent, where it remained until November 2005. Initially, the role of the leading patrolman was to augment naval patrols on shore, and assist in regulating duties as necessary. In 1968 leading patrolmen were renamed leading regulators.[6]

The work of the RNP encompasses dealing with routine disciplinary matters, investigation of crime, crime prevention, and advice to the command on general security and close protection matters. As such, members of the RNP are employed in both uniformed and plainclothes roles, on ships, within shore establishments and in 3 Commando Brigade and other Royal Marine units.

Individuals posted on ships and within shore establishments are responsible, through their chain of command for:

Although members of the RNP are not warranted constables, the force as a whole is subject to inspection by HM Inspectorate of Constabulary, in the same way as the UK's civilian police forces.[7] 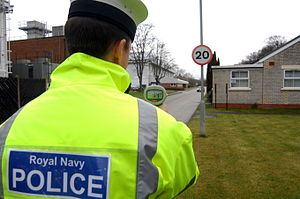 A member of the Royal Navy Police carrying out a vehicle speed check at HMS Sultan in Gosport, Hampshire.

The RNP have jurisdiction over members of the Royal Navy subject to service discipline, as well as having reciprocal powers to deal with service personnel of the other two branches of the Armed Forces; The British Army and The Royal Air Force.

The RNP have jurisdiction over some civilians in certain circumstances, as defined by the Armed Forces Act 2006.

The Royal Navy Police is headed by the provost marshal (naval) (PM(N)), based at HMS Excellent, Portsmouth, who is responsible for the management of the service, and the assurance of professional standards delivered by the RNP in the course of their duties.

RN and RM policemen are posted on ships and shore establishments with regional headquarters in Portsmouth, Plymouth and Faslane and Special Investigation Branch offices at Portsmouth and Plymouth.

The Royal Navy Police recruits internally, from within the service, requiring candidates to have reached the trained strength in their initial branch, before serving for four years and qualifying for advancement to leading rate or corporal within that branch. Candidates then undertake a suitability assessment at the Defence College of Policing and Guarding at MOD Southwick Park.

On completion of training candidates are rated as leading hand, or corporal.

Further professional training is delivered at MOD Southwick Park, or through territorial police forces and is required for later advancement to petty officer or sergeant, master at arms (MAA) or colour sergeant or warrant officer class 1.

The trade badge for regulators is a crown (worn in a wreath by masters-at-arms).

When undertaking General Police Duties (GPD), regulators will wear either MTP combat uniform or No. 3 dress with senior rates (petty officer and above) wearing the 3A long-sleeved shirt and tie, and ratings wearing short sleeve white shirt with an open neck and black trousers. They will also wear a black stab vest, or high-visibility equipment vest or both, or hi-visibility jacket marked with "RN POLICE" or "ROYAL NAVY POLICE" and a dark-blue beret.

In addition to a stab vest, regulators will carry an expandable baton (usually an ASP), speedcuffs, TETRA radio with earpiece (on the secure Airwave network), and a torch.