Delonix regia is a species of flowering plant in the family Fabaceae, subfamily Caesalpinioideae. It is noted for its fern-like leaves and flamboyant display of flowers. In many tropical parts of the world it is grown as an ornamental tree and in English it is given the name Royal Poinciana or Flamboyant. It is also one of several trees known as Flame tree.

This species was previously placed in the genus Poinciana, named for Phillippe de Longvilliers de Poincy, the 17th century governor of Saint Christophe (Saint Kitts). It is a non nodulating legume. 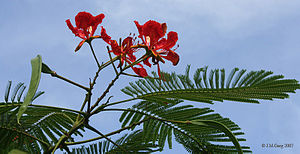 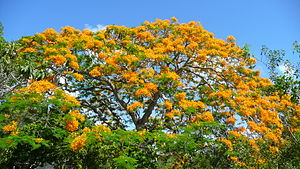 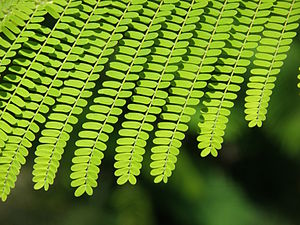 The Delonix Regia is found in Madagascar's dry deciduous forests. In the wild it is endangered, but it is widely cultivated elsewhere. In addition to its ornamental value, it is also a useful shade tree in tropical conditions, because it usually grows to a modest height (mostly 5 meters, but it can reach an maximum height of 12 meters) but spreads widely, and its dense foliage provides full shade. In areas with a marked dry season, it sheds its leaves during the drought, but in other areas it is virtually evergreen. Flowers appear in corymbs along and at the ends of branches. Pods are green and flaccid when young and turn dark-brown and woody.[3] 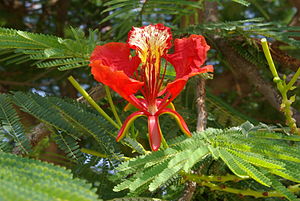 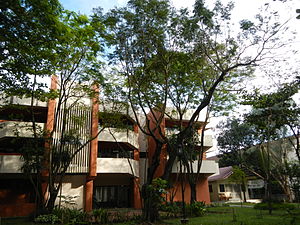 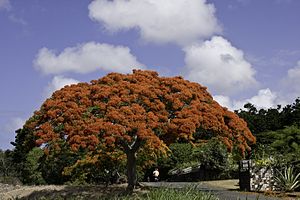 The Royal Poinciana (Island of Mauritius)

The flowers are large, with four spreading scarlet or orange-red petals up to 8 cm long, and a fifth upright petal called the standard, which is slightly larger and spotted with yellow and white. The naturally occurring variety flavida (Bengali: Radhachura) has yellow flowers.[2] Seed pods are dark brown and can be up to 60 cm long and 5 cm wide; the individual seeds, however, are small, weighing around 0.4 g on average. The compound leaves have a feathery appearance and are a characteristic light, bright green. They are doubly pinnate: Each leaf is 30–50 cm long and has 20 to 40 pairs of primary leaflets or pinnae on it, and each of these is further divided into 10–20 pairs of secondary leaflets or pinnules.

The Royal Poinciana requires a tropical or near-tropical climate, but can tolerate drought and salty conditions. The Poinciana prefers an open, free-draining sandy or loamy soil enriched with organic matter. The tree does not like heavy or clay soils and flowers more profusely when kept slightly dry. The Poinciana is very widely grown in the Caribbean, Africa, Northern Australia (the southern extremes previously limited to South East Queensland, although it now grows and blooms successfully in Sydney with flowering trees identified in the suburbs of Petersham, Parramatta, Guildford, Warwick Farm and Kurmond), Hong Kong, the Canary Islands, Mexico, Paraguay, Peru, Cyprus, Malta, Thailand, Philippines, southern China. It is the official tree in Vietnam, Tainan, Taiwan; Xiamen, Fujian Province, People's Republic of China; and Shantou, Canton Province, People's Republic of China. National Cheng Kung University, a university located in Tainan, put Royal Poinciana on its emblem. It also grows throughout southern Brazil, with ornamental trees in Rio Grande do Sul (Canoas and Porto Alegre).[4][5] 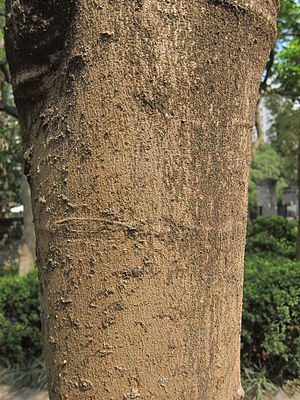 Close up of bark 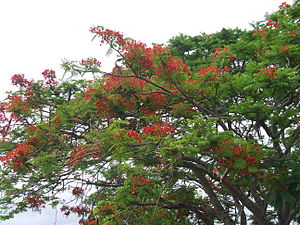 Delonix regia is endemic to the western forests of Madagascar, but has been introduced into tropical and sub-tropical regions worldwide. In the continental United States, it grows in South Florida, Central Florida,[6] the Rio Grande Valley of South Texas, ranging from the low deserts of Southern Arizona (to as high as Tucson), and Southern California. It also grows in the Dominican Republic, Cuba, Haiti, Hawaii, Mexico (especially in the Yucatan peninsula), Nicaragua, Puerto Rico, U.S. Virgin Islands, Guam, Canary Islands, the Commonwealth of the Northern Mariana Islands, where it is the official tree of the islands, and in Israel. It is much loved in the Caribbean; many Dominican & Puerto Rican paintings feature Flamboyant Trees. It can also be found in The Bahamas. The Poinciana is the national flower of St. Kitts and Nevis. The islands of Mauritius and La Réunion have widespread distribution of the Royal Poinciana where it announces the coming of the new year. 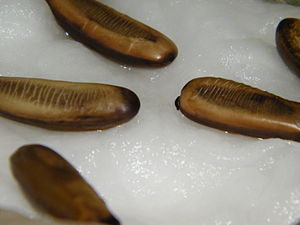 Royal Poinciana seeds after soaking them in water for 6 days

The Royal Poinciana is regarded as naturalised in many of the locations where it is grown. It is a popular street tree in the suburbs of Brisbane, Australia. The tree is also found in India, where it is referred to as the Gulmohar, or Gul Mohr.[7] In West Bengal (India) and Bangladesh it is called Krishnachura.

The town of Peñuelas, Puerto Rico, located about 12 miles or 19 kilometers west of Ponce, is nicknamed "El Valle de los Flamboyanes" ("The Valley of the Poinciana Trees"), as many Flamboyant trees are found along the surrounding Río Guyanes, Río Macana, and Río Tallaboa Rivers.

In Vietnam, this tree is called "Phượng vỹ", or phoenix's tail, and is a popular urban tree in much of Vietnam. Its flowering season is May-July, which coincides with the end of the school year in Vietnam. Because of this timing, the flower of Poinciana is sometimes called the "flower of pupil". Hai Phong city is nicknamed "Thành phố hoa phượng đỏ" ("City of red Poinciana").

Flame Trees, the iconic ballad by Australian Rock music band Cold Chisel is said to have been inspired by a preponderance of poinciana trees. 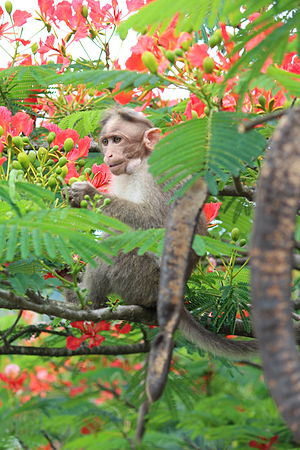 The Royal Poinciana is most commonly propagated by seeds. Seeds are collected, soaked in warm water for at least 24 hours, and planted in warm, moist soil in a semi-shaded, sheltered position. In lieu of soaking, the seeds can also be 'nicked' or 'pinched' (with a small scissors or nail clipper) and planted immediately. These two methods allow moisture to penetrate the tough outer casing, stimulating germination. The seedlings grow rapidly and can reach 30 cm in a few weeks under ideal conditions.

Less common, but just as effective, is propagation by semi-hardwood cuttings. Branches consisting of the current or last season's growth can be cut into 30 cm sections and planted in a moist potting mixture. This method is slower than seed propagation (cuttings take a few months to root) but is the preferred method for ensuring new trees are true to form. As such, cuttings are a particularly common method of propagation for the rarer yellow-flowering variety of the tree. 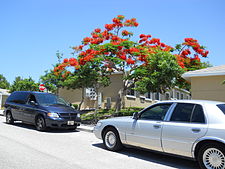 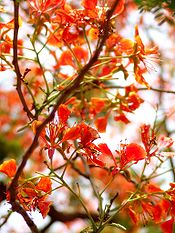