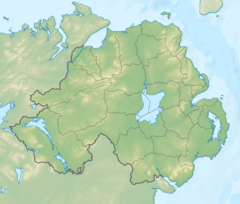 Situated on the North Antrim Causeway Coast, Royal Portrush occupies a triangle of giant sand hills with views of the hills of Inishowen in County Donegal in the west, the Isle of Islay and Southern Hebrides in the north, with the Giant's Causeway and the Skerries in the east. The course is overlooked by the ruins of the 13th century Dunluce Castle, which gives its name to Dunluce course.

The Royal Portrush Golf Club was founded in 1888 as "The County Club." It became "The Royal County Club" in 1892 under the patronage of the Duke of York and assumed its present name in 1895 under the patronage of the Prince of Wales. In 1947 Rathmore Golf Club member Fred Daly became the first Irishman to win The Open Championship, and four years later the club hosted the championship itself, the only time the event has been held in Northern Ireland. The club has also hosted the Senior British Open Championship between 1995 and 1999 and again in 2004. The club was also host to the 2010 Palmer Cup. Daly's feat was repeated by club member Darren Clarke in 2011. Clarke also named Royal Portrush his favourite golf course in the world.

The second course at Royal Portrush is the Valley Links, and is used mostly by members of the 'town' club Rathmore and the ladies and juniors of Royal Portrush. It is shorter and considered less demanding than the Dunluce Links. Rathmore clubhouse and the ladies clubhouse are situated adjacent to the first tee. A nine-hole pitch and putt course, named Skerries, starts from the same location. There is also a driving range at the club.

The Valley Links is the home of Rathmore Golf Club whose clubhouse is situated near the first tee. Famous members include 1947 Open Champion Fred Daly and 2010 U.S. Open champion Graeme McDowell.[3]

On the Dunluce course at Portrush there are several signature holes on both the front and back nine. In particular are the fourth, fifth and fourteenth holes. The fourth hole is a long par four which is more than 480 yards from the championship tees, with out of bounds right and thick rough on the left. There are several bunkers in the undulating fairway and the green is placed between two small sand hills. The fifth hole is a relatively short downhill par four with a dogleg to the right. It has no bunkers but a heavily undulating green perched on the edge of a large drop down to the beach and has views across the White Rocks beach, and the Dunluce Castle after which the course was named. The fourteenth hole, named Calamity Corner, but locally known as just "Calamity" is a long 210 yard, uphill par three. It is played to a green over a huge ravine short and right, with mounds and hollows to the back and left of the green.

The Open Championship was staged at Royal Portrush only once, in 1951; Max Faulkner won his sole major championship. The Open will return to Portrush in July 2019.[4]

A number of course changes are being made in preparation for the 2019 Open. The 17th and 18th holes of the current Dunluce Links, the Championship course, are to be replaced by two new holes (the 7th and 8th) on land that is currently part of the Valley Links. Holes 7 to 16 will then be holes 9 to 18 on the redesigned course. The land freed-up by removing the 17th and 18th will be used for the tented village. There will be a number of other changes, including lengthening the 2nd hole by 40 yards and realigning the 10th (the new 12th). While the par of the course will remain at 72, the overall length will increase by almost 200 yards to 7,337 yards. The total number of bunkers will increase from 59 to 62. Since the Valley Links is losing two holes to the Dunluce Links, a number of changes are also having to be made to that course.[5]