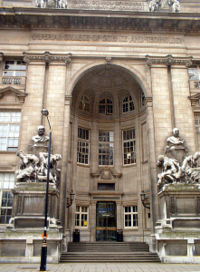 The Royal School of Mines was established in 1851,[1] as the Government School of Mines and Science Applied to the Arts. The School developed from the Museum of Economic Geology, a collection of minerals, maps and mining equipment made by Sir Henry De la Beche, and opened in 1841. The museum also provided some student places for the study of mineralogy and metallurgy. Sir Henry was the director of the Geological Survey of Great Britain, and when the collections outgrew the premises the museum and the survey were placed on an official footing, with government assistance.

The Museum of Practical Geology and the Government School of Mines and Science Applied to the Arts opened in a purpose-designed building in Jermyn Street in 1851. The officers of the Geological Survey became the lecturers and professors of the School of Mines. The Royal College of Chemistry was merged into it in 1853. The name was changed in 1863 to the Royal School of Mines, and was moved to South Kensington in 1872, leaving the Museum of Practical Geology behind in Jermyn Street. In 1907, the RSM was incorporated into Imperial College of Science and Technology, but remains a "Constituent College" of Imperial. The last Dean of the Royal School of Mines was Professor John Monhemius before the position was removed.

Today, the RSM no longer exists as an academic entity. The RSM is both the building in which the departments are housed, and the student body that organises social events, sports teams, clubs and societies for students within those departments.[2]

The Indian School of Mines, in the city of Dhanbad of India was established in 1926 by the British India Government on the lines of Royal School of Mines of London, by Lord Irwin, the then Viceroy of India. At that time India was ruled by Britain.[3] 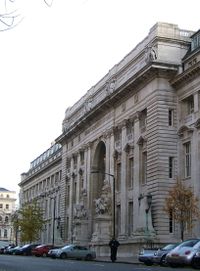 Designed by Sir Aston Webb, the RSM building is Classical in style with Ionic pilasters.[4] It was erected between 1909 and 1913 specifically to house the school, which was previously resident in the Huxley Building on Exhibition Road, now the Henry Cole Wing of the Victoria and Albert Museum. The foundation stone was laid by King Edward VII on 8 July 1909.

The RSM was the last of many buildings that Webb designed for the Albertopolis area (including the Cromwell Road frontage of the V&A) and, some would argue, his least resolved. Constructed in Portland stone, the entrance is formed by a three storey, semicircular niche, flanked by two memorials (sculpted by Paul Raphael Montford, 1916–1920) to Alfred Beit and Julius Wernher who were major benefactors to the school.[5] The western wing of the building is named after Webb, while the eastern end is named after the Goldsmiths' Company who helped to finance the building of the RSM.

The building in film

The distinctively Edwardian and academic styling cues used in the building's architecture have led to the RSM appearing in a number of film and television productions:

File:Royal School of Mines logo.png The RSM students union, has a constitution written in very formal terms that states the RSM exists for:

These are achieved through sports teams, societies and events which span the academic year from October to July. The highlight of the sporting and social calendar is the annual Bottle Match against Camborne School of Mines, the second oldest rugby varsity match in the world.[6]

Notable past students and professors

The Royal School of Mines has a high reputation in Geology, Geophysics, Mineralogy, Geochemistry, Materials Science, Petroleum Science and Engineering. Through societies such as the RSM Association and the Chaps Club, the RSM maintains a strong alumni network in the global mining community.[10]