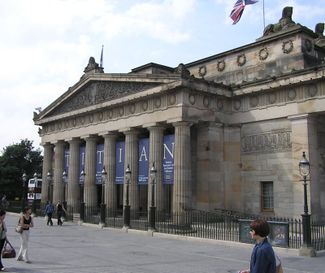 The RSA building, viewed from the south 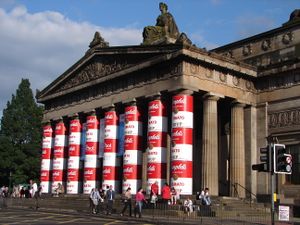 The North portico, specially decorated for an Andy Warhol exhibition on the 20th anniversary of the artist's death

The Royal Scottish Academy (RSA) is a Scottish organisation that promotes contemporary Scottish art. Founded in 1826 as the Scottish Academy, it became the Royal Scottish Academy on being granted a royal charter in 1838. The RSA maintains a unique position in Scotland as an independently funded institution led by eminent artists and architects to promote and support the creation, understanding, and enjoyment of visual arts through exhibitions and related educational events.[1] The RSA is separate from the Royal Academy in London, though there are links between the two organisations.

In addition to a continuous programme of exhibitions, the RSA also administers scholarships, awards, and residencies for artists who live and work in Scotland. The RSA's historic collection of important artworks and an extensive archive of related material chronicling art and architecture in Scotland over the last 180 years are housed in the Dean Gallery, and are available to researchers by appointment. Displays of the historic collections are mounted whenever possible.

The RSA is led by a body of eminent artist and architect members who encompass a broad cross-section of contemporary Scottish art. Members are known as Academicians, and are entitled to use the postnominal letters RSA. The president uses the postnominal letters PRSA while in office, and PPRSA (Past President of the RSA) thereafter.

Academicians are elected to the Academy by their peers. There are also Honorary Academicians (HRSA), including the RSA's patron, the Duke of Edinburgh. After amendments to the Supplementary Charter in 2005, once Associates (ARSA) have submitted a Diploma work into the Permanent Collection of the RSA, they are then entitled to full membership of the Academy. The membership includes 30 Honorary Academicians and 104 Academicians.[3] As of 2010, the RSA President is Professor Bill Scott, Secretary Arthur Watson and Treasurer Professor Ian Howard.[4]