From Infogalactic: the planetary knowledge core
Jump to: navigation, search
This article is about the culture and arts-related institution. For other uses, see RSA (disambiguation). 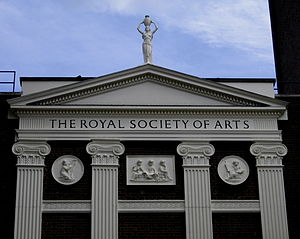 The Royal Society of Arts building in London, England

The Royal Society for the Encouragement of Arts, Manufactures and Commerce (RSA) is a London-based, British organisation committed to finding practical solutions to today's[when?] social challenges.[1] Founded in 1754 as the Society for the encouragement of Arts, Manufacture and Commerce, it was granted a Royal Charter in 1847,[2] and the right to use the term Royal in its name by King Edward VII in 1908. The shorter version, The Royal Society of Arts and the related RSA acronym, are used more frequently than the full name.

Charles Dickens, Adam Smith, Benjamin Franklin, Karl Marx, William Hogarth, John Diefenbaker, Stephen Hawking and Tim Berners-Lee are some of the notable past and present members, and today it has Fellows elected from 80 countries worldwide.

The RSA award three medals, the Albert Medal, the Benjamin Franklin Medal (following a decision by the Board in 2013, the Benjamin Franklin Medal is now overseen by the RSA US, although the final nomination is ratified by the UK Board) and the Bicentenary Medal. Medal winners include Nelson Mandela, Sir Frank Whittle, and Professor Stephen Hawking. The RSA members are innovative contributors to the human knowledge, as shown by the Oxford English Dictionary which records the first use of the term "sustainability" in an environmental sense of the word in the RSA's Journal in 1980.

On the RSA building's frieze The Royal Society of Arts words (see photograph) are engraved, although its full name is Royal Society for the encouragement of Arts, Manufactures and Commerce. The short name and the related R(oyal) S(ociety) of A(rts) abbreviation is used more frequently than the full name.

The RSA's mission expressed in the founding charter was to "embolden enterprise, enlarge science, refine art, improve our manufacturers and extend our commerce", but also of the need to alleviate poverty and secure full employment. On its website, the RSA characterises itself as "an enlightenment organisation committed to finding innovative practical solutions to today’s social challenges".

The RSA's Patron is currently HM Elizabeth II, the RSA's President is HRH The Princess Royal (who replaced her father, HRH The Duke of Edinburgh in 2011), its Chairman is Vikki Heywood,[3] and its Chief Executive is Matthew Taylor.

Fellows of the RSA

Main article: List of Fellows of the Royal Society of Arts

Fellows can apply for membership (which is reviewed by an admissions panel) and pay £14 per month (2015),[5] though some claim they are elected to the Fellowship.[6][7][8] Becoming a Fellow is claimed to be an honour.[9][10][11] Fellows must have demonstrated achievement or potential related to the arts, manufactures and commerce. The RSA says, "The RSA Fellowship is an international community [of] achievers and influencers from a wide array of backgrounds and professions, distinguished by the title "FRSA". Fellows are social entrepreneurs to scientists, community leaders to commercial innovators, artists and journalists to architects and engineers, and many more."[12]

Originally modelled on the Dublin Society for improving Husbandry, Manufacturers and other Useful Arts, the RSA, from its foundation, offered prizes through a Premium Award Scheme that continued for 100 years. Medals and, in some cases, money were awarded to individuals who achieved success in published challenges within the categories of Agriculture, Polite Arts, Manufacture, Colonies and Trade, Chemistry and Mechanics. Successful submission included agricultural improvements in the cultivation of crops and reforestation, devising new forms of machinery, including an extendable ladder to aid firefighting that has remained in use relatively unchanged, and artistic skill, through submissions by young students, many of whom developed into famous artists i.e. Edwin Landseer who at the age of 10 was awarded a silver medal for his drawing of a dog.

In 1936, the RSA awarded the first distinctions of Royal Designers for Industry (RDI or HonRDI), reserved for "those very few who in the judgment of their peers have achieved 'sustained excellence in aesthetic and efficient design for industry'".

In 1937 "The Faculty of Royal Designers for Industry" was established as an association with the object of "furthering excellence in design and its application to industrial purposes": membership of the Faculty is automatic for (and exclusive to) all RDIs and HonRDIs. The Faculty currently has 120 Royal Designers (RDI) and 45 Honorary Royal Designers (non-UK citizens who are awarded the accolade of HonRDI): the number of designers who may hold the distinction of RDI at any one time is strictly limited.

The RSA moved to its current home in 1774. The House, situated in John Adam Street, near the Strand in central London, had been purpose-designed by the Adam Brothers (James Adam and Robert Adam) as part of their innovative Adelphi scheme. The original building (6-8 John Adam Street) includes the Great Room, which features a magnificent sequence of paintings by Irish artist James Barry titled The progress of human knowledge and culture and portraits of the Society's first and second presidents, painted by Thomas Gainsborough and Joshua Reynolds respectively.

The RSA has expanded into adjacent buildings in the intervening years, and now also includes 2 and 4 John Adam Street and 18 Adam Street.The first occupant of 18 Adam Street was the Adelphi Tavern, which is mentioned in Dickens's The Pickwick Papers. The former private dining room of the Tavern contains a magnificent Adam ceiling with painted roundels by the school of Kauffman and Zucchi.

A major refurbishment in 2012 by Matthew Lloyd Architects won a RIBA London Award in 2013, and a RIBA English Heritage Award for Sustaining the Historic Environment, also in 2013.[15]

The RSA devised a scheme for commemorating the links between famous people and buildings, by placing plaques on the walls — these continue today as "blue plaques" which have been administered by a range of government bodies. The first of these plaques was, in fact, of red terracotta erected outside a former residence of Lord Byron (since demolished). The Society erected 36 plaques until, in 1901, responsibility for them was transferred to the London County Council (which changed the colour of the plaques to the current blue) and, later, the Greater London Council (the G.L.C.) and, most recently, English Heritage. Similar schemes are now operated in all the constituent countries of the United Kingdom.

The Society for the encouragement of Arts, Manufactures and Commerce hosted the first exhibition of contemporary art in 1760. Thomas Gainsborough and Sir Joshua Reynolds, who had exhibited at this first exhibition were subsequently founder members of The Royal Academy of Arts in 1768.

In 1876, a predecessor of the Royal College of Music, the National Training School for Music, was founded by the RSA.

In 1929 The Society purchased the entire village of West Wycombe and, after extensive repairs, deeded it over to the National Trust.

In 1936, the RSA awarded the first distinctions of Royal Designers for Industry (RDI or HonRDI), reserved for "those very few who in the judgment of their peers have achieved 'sustained excellence in aesthetic and efficient design for industry'".

In Great Britain and Ireland, the RSA offers regional activities to encourage Fellows to interact with each other locally and to address local topics of interest. The UK Regions are: East of England, East Midlands, London, North East, North West, Scotland, South East, South West, Wales, West, West Midlands and Yorkshire; Northern Ireland, part of the UK, is treated, for historical reasons, as a single all-Ireland region — 'Ireland' — that includes the Republic of Ireland. The RSA also has a presence in Belgium (to increase its influence in Brussels) and, further afield, in Australia, India, Southern Africa and the USA.[citation needed]

The RSA's public events programme is a key part of its charitable mission to make world-changing ideas and debate freely available to all.[16] Over 100 keynote lectures, panel discussions, debates, and documentary screenings are held each year, many of which are live-streamed over the web.[17] Events are free and open to the public, and mp3 audio files [18] and videos [19] are made available on the RSA's website and YouTube page.[20]

The choice of speaker for the recent annual Presidential lecture has been a matter of interest in the press.[22] Danish professor Björn Lomborg, was chosen; his latest book, Cool It, suggests that the imminent demise of polar bears is a myth. As president of the RSA, Prince Philip's first choice of speaker was Ian Plimer, professor of mineral geology at Adelaide University, but this was rejected as too controversial, as Plimer argues that the theory of Anthropogenic Global Warming is unproven.

On 14 January 2010, the RSA in partnership with Arts Council England hosted a one-day conference in London called "State of the Arts".[23] A number of speakers from various disciplines from art to government gathered to talk about the state of the arts industry in the United Kingdom. Notable speakers included Jeremy Hunt MP, Secretary of State for Culture, Media & Sport and his counterpart Ben Bradshaw MP, who was then the Secretary of State for Culture, Media & Sport. Notably, Jeremy Hunt stated that if the Conservative party won the next elections then government funding for the arts would be cut.[24]

Excerpts from the events programme form the basis for the 10-minute whiteboard animations as shown on the theRSAorg YouTube channel.[25] The series was created as a way of making important, socially-beneficial ideas as accessible, clear, engaging and universal as possible.[26] The series is produced and audio-edited at the RSA, and the animations are created by RSA Fellow Andrew Park at Cognitive Media.[27]

The first 14 of these had gained 46 million views as of 2011,[28] making it the no.1 nonprofit YouTube channel worldwide. The first animation in the RSA Animate series was based on Renata Salecl's speech delivered for RSA on her book about choice.

A number of celebrity fans have tweeted about RSA Animates, including Yoko Ono, Eric Schmidt and Milla Jovovich.[29]

During the 1980s, the RSA worked with the Comino Foundation and established a Comino Fellowship Committee 'to change the cultural attitude to industry from one of lack of interest or dislike to one of concern and esteem'. This eventually led to a joint government/industry initiative to promote 1986 as "Industry Year",[30][31] with the RSA and the Comino Foundation providing core funding of £250,000 - which persuaded the Confederation of British Industry to raise £1 million and government departments to provide £3 million.[32]

In July 2008, the RSA became a sponsor of an academy in Tipton, The RSA Academy, which opened in September 2008. New buildings are currently under construction to designs by John McAslan and Partners. Current projects include Arts and Ecology, Citizen Power, Connected Communities, Design and Society, Education, Public Services, Social Brain, and Technology in a Cold Climate.[33]

Past projects include delivering fresh drinking water to the developing world, rethinking intellectual property from first principles to produce a Charter (published as the Adelphi Charter), investigating schemes to manage international migration and exploring the feasibility of a UK-wide personal carbon trading system. It still promotes the practice of inclusive design, and is working with artists to communicate ideas about environmental sustainability (for example, through one of the RSA's past projects, WEEE Man, and currently through the Arts and Ecology project).