Berlin-Brandenburg Academy of Sciences and Humanities

From Infogalactic: the planetary knowledge core
(Redirected from Royal Society of Berlin)
Jump to: navigation, search

The Berlin-Brandenburg Academy of Sciences and Humanities (German: Berlin-Brandenburgische Akademie der Wissenschaften), abbreviated BBAW, is the official academic society for the natural sciences and humanities for the German states of Berlin and Brandenburg. Housed in three locations in and around Berlin, Germany, the BBAW is the largest non-university humanities research institute in the region.[1]

The BBAW was constituted in 1992 by formal treaty between the governments of Berlin and Brandenburg on the basis of several older academies, including the historic Prussian Academy of Sciences from 1700 and East Germany's Academy of Sciences of the German Democratic Republic from 1946. By this tradition, past members include the Brothers Grimm, Wilhelm and Alexander von Humboldt, Lise Meitner, Theodor Mommsen, Albert Einstein, and Max Planck.[2] Today the BBAW operates as a public law corporation under the auspices of the German National Academy of Sciences, and has over 300 fellows and 250 additional staff members.[3] Its elected scientific membership has included 78 Nobel laureates.[4][5] 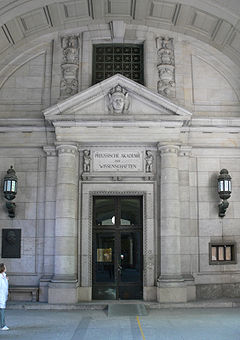 Entrance to the old Prussian Academy of Sciences on Unter den Linden 8. Today the building hosts some BBAW projects 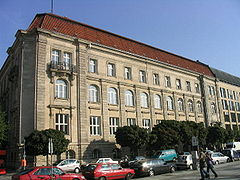 The roots of the BBAW can be traced to the Society of Sciences of the Elector of Brandenburg (German: Kurfürstlich Brandenburgische Sozietät der Wissenschaften), founded in 1700 by Gottfried Wilhelm Leibniz under the patronage of Frederick I of Prussia. The institution was created on the principle of uniting the natural sciences and the humanities, making it a prototype for other academies across Europe.[2] The rise of the field of physics can be genealogically traced to this period of the Academy,[7] as well as modern European mathematics.[8]

Under Frederick the Great, an enthusiastic patron, the Academy rose to even wider significance. In 1752 it merged with the Nouvelle Société Littéraire to form the Royal Academy of Sciences (German: Königliche Akademie der Wissenschaften). The new Academy attracted prominent scientists and philosophers, including Immanuel Kant, who were able publish writings which would have been censored elsewhere in Europe.[9] While it was an important center in the Age of Enlightenment, due to its royal patronage the Academy did not enjoy complete freedom. Political writings in its Proceedings throughout the 18th century argued the merits of monarchies over republics, warned against the French Revolution, and defended Prussia against accusations that it was despotic. In the 19th century the von Humboldt brothers reorganized the Academy along more open lines. Prominent critical thinkers such as Theodor Mommsen, Friedrich Wilhelm Joseph Schelling, Friedrich Schleiermacher were all active members for many decades.[10]

With the collapse of the German monarchy in 1918, the Royal Academy was renamed the Prussian Academy of Sciences (German: Preußische Akademie der Wissenschaften). During this period it rose to international fame[11] and its members included top academics in their fields such as Albert Einstein, Max Planck, Hermann Diels, and Ernst Bloch.[10]

During Nazi period, as with all institutions across Germany, the Academy became subject to the "Law for the Restoration of the Professional Civil Service." As a result, Jewish employees and political opponents were expelled. Albert Einstein resigned in 1933 before he could be expelled and Max Planck, the Academy's president, was coerced to publicly support National Socialism. However, despite initial resistance, over time the Academy and many of its scientists became willing tools of the Nazis. New statutes in 1938 reorganized the Academy according to the Führer principle, causing Planck to resign his presidency in protest.[12] The mathematician Theodor Vahlen, proponent of the anti-Semitic Deutsche Mathematik movement, became its president.[13] By war's end the Academy's reputation was destroyed and many of its prominent scientists were stigmatized. Planck died in 1947, a broken man.[12]

After World War II, what remained of the Academy wound up in the Soviet Zone of Occupation. Re-opened by the Russians in 1946 as the German Academy of Sciences at Berlin (German: Deutsche Akademie der Wissenschaften zu Berlin), it moved to the former Prussian Maritime Trade Company building on the Gendarmenmarkt in 1949. The Academy was renamed the Academy of Sciences of the German Democratic Republic (German: Akademie der Wissenschaften der DDR) or AdW in 1972, by which time it had over 400 members and 24,000 employees.[11] After German reunification the AdW was dissolved in December 1991 due to its controversial role in support of the East German regime. In August 1992, the BBAW was reconstituted by interstate treaty between the Landtags of Berlin and Brandenburg using the original model of the old Prussian Academy.[12] Today its headquarters are located at the former AdW building, with special projects conducted at the old Prussian Academy on the Unter den Linden. It also has a third office in Potsdam.[11]

The academy sponsors a variety of interdisciplinary, long-term and externally funded projects. These include large German and foreign-language dictionaries; historical-critical publications of ancient, medieval, and modern texts; and editing and interpreting the classical literature by scholars from diverse academic fields. In 2012 the BBAW was home to 47 major projects, the most notable include:[6]

The Academy has established a number of research centres over time, including centres for basic research, language and history. Each seeks to pool expertise from various fields with the goal of improving cooperation between university and non-university institutions and stimulating regional and international research innovation. In 2012 the BBAW operated three such centers:[20]

The BBAW operates at three locations in and around Berlin:[1]

Funding for the Academy comes from primarily from the states of Berlin and Brandenburg, with a significant portion of its research supported by the federal and state governments of Germany.[2]

The Academy bestows a number of scientific medals and awards:[22][23]

The Academy's Proceedings have been variously titled throughout history:[10]

Today the BBAW's publications appear in a wide variety of established journals, as well as its own publications such as Jahrbuch, Berichte und Abhandlungen, Debatten and the journal Gegenworte.[24]