Royal Standard of the United Kingdom

The Royal Standard used in Scotland[1]

Although almost universally called a standard, such flags when used in the United Kingdom are banners of arms, as they comprise the shield of the Royal Arms. Outside the United Kingdom, the Royal Standard is usually a nation's banner of arms with a blue disc containing a wreath of gold roses encircling the crowned letter 'E', (for 'Elizabeth'), superimposed upon it (the Personal Flag of Queen Elizabeth II).

The Royal Standard of the United Kingdom is flown when the Queen is in residence in one of the royal palaces and on her car during official journeys. It may be flown on any building, official or private, during a visit by the Queen, if the owner or proprietor so requests. The Royal Standard was flown aboard the royal yacht when it was in service and the Queen was on board. The only church that may fly a Royal Standard, even without the presence of the Sovereign, is Westminster Abbey, a Royal Peculiar.[2]

The Royal Standard is flown at royal residences only when the sovereign is present. If the Union Flag flies above Buckingham Palace, Windsor Castle or Sandringham House it signals that the Queen is not in residence. In 1934, King George V permitted his subjects in Scotland to display the ancient Royal Standard of Scotland as part of his silver jubilee. Today, it flies above Holyrood Palace and Balmoral Castle when the Queen is not in residence.[1]

When the Queen attends the Parliament at the Palace of Westminster, the Royal Standard flies from Victoria Tower.

Unlike the Union Flag, the Royal Standard is never flown at half-mast, even after the demise of the Crown, as there is always a sovereign on the throne.[2]

Controversy arose regarding the lack of a flag at half-mast over Buckingham Palace following the death of Diana, Princess of Wales, in 1997. The Queen was then in summer residence at Balmoral; and according to established custom, no flag was displayed over Buckingham Palace, as the monarch was not present. The Queen proposed a compromise whereby the Union Flag would be flown at half-mast on the day of Diana's funeral.[3] Since then, the Union Flag has flown regularly in the Queen's absence and has been lowered to half-mast to mark several occasions such as the death of Queen Elizabeth The Queen Mother,[4] the September 11 attacks and the 7 July 2005 London bombings.[5] The Union Flag was also flown at half-mast over Buckingham Palace as a mark of respect on the first anniversary of the death of Diana, Princess of Wales, on Bank Holiday, Monday, 31 August 1998. 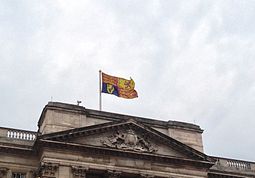 In England, Wales, Northern Ireland, and outside the United Kingdom, the flag is divided into four quadrants. The first and fourth quadrants represent the ancient Kingdom of England and contain three gold lions, (or "leopards"), passant guardant on a red field; the second quadrant represents the ancient Kingdom of Scotland and contains a red lion rampant on a gold field; the third quadrant represents the ancient Kingdom of Ireland and contains a version of the gold harp from the coat of arms of Ireland on a blue field. The inclusion of the harp remains an issue for some in Ireland. In 1937 Éamon de Valera, then Taoiseach asked Dominions Secretary Malcolm MacDonald if the harp quarter could be removed from the Royal Standard on the grounds that the Irish people had not given their consent to the Irish emblem being included. The request was denied and the harp remains.[6]

The modern Royal Standard of the United Kingdom, apart from minor changes, (notably to the form of harp used to represent Ireland), dates to the reign of Queen Victoria. Earlier Royal Standards of the United Kingdom incorporated the Arms of Hanover and of the Kingdom of France, representing the title of Elector (later King) of Hanover and the theoretical claim to the throne of France, a claim dropped in 1800). The Hanoverian association terminated in 1837 with the accession of Queen Victoria who, being a female, could not accede to Hanover. 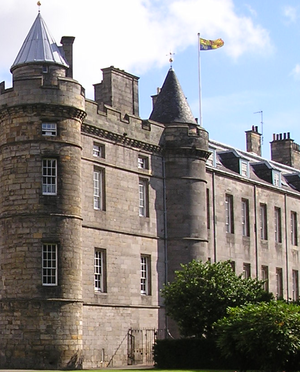 In Scotland a separate version of the Royal Standard of the United Kingdom is used, whereby the red Lion Rampant of the Kingdom of Scotland appears in the first and fourth quadrants, displacing the three gold lions passant guardant of England, which occur only in the second quadrant. The third quadrant, displaying the gold harp of Ireland, remains unaltered from that version used throughout the remainder of the United Kingdom and overseas.

Other members of the Royal Family also use this Scottish version when in Scotland, with the only exceptions to this protocol being the consort of a queen regnant and the heir apparent, the Duke of Rothesay, each of whom has his own individual standard.

Other members of the Royal Family

Variants of the Royal Standard are used for other members of the British Royal Family.

Princes and princesses of royal blood

Other members of the Royal Family have personal standards of their own. These are variants of the Royal Standard of the United Kingdom, (including that which is used in Scotland), with the bearing of a white label and either three points or pendants (for children of a sovereign), or five points (grandchildren of a sovereign). Traditionally all princes and princesses of royal blood (i.e. descendants of the sovereign) are granted arms on their 18th birthday, thus giving them a banner to fly from their residences.

The following members of the Royal Family have personal standards:

Consorts of the British monarch

Queens consort of the British monarch are granted arms based on the Royal Standard and their own personal arms from before their marriage, or the arms of their family. In Scotland, a queen consort will use the Scottish version of the Royal Standard. They do not have different standards for the Commonwealth realms that have their own Royal Standards.

Consorts of a queen regnant are not granted use of the British Royal Standard. They use standards based on their own family arms. 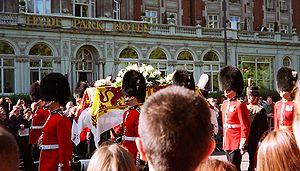 Funeral carriage of Diana, Princess of Wales, with the coffin draped with an ermine-bordered standard.[8]

Other members of the Royal Family may use the Royal Standard of the United Kingdom, but within an ermine border, (a white border with black spots representing the ermine fur). This standard is mainly used for the wives of British princes, or members of the Royal Family who have not yet been granted their own arms. Diana, Princess of Wales, and more recently, Princess Alice, Duchess of Gloucester,[9] had this standard draped over their coffins at their funerals.

Camilla, Duchess of Cornwall, also enjoys the right to use this version of the Royal Standard although she rarely exercises it on her own. She received a grant of arms on 17 July 2005, which, based on past practice, could form the basis for her own standard when she ascends to become consort of the next king, however, officials have announced no such standard has yet been appoved.[10]

Just prior to her marriage in April 2011, Miss Catherine Middleton received a grant of arms based upon those granted to her father, Michael Middleton. Like the Duchess of Cornwall, it is possible that these arms could form part of a future standard when she ascends to become Queen Consort.[11]

During her marriage, Diana, Princess of Wales, used a personal standard. This standard married the Prince of Wales' with the Spencer Arms, much like her coat of arms during her marriage. After the divorce was finalized in 1996, she used the Royal Standard with ermine border. 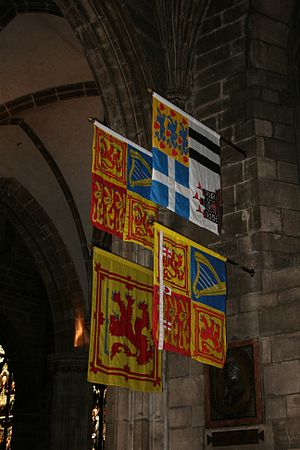 Royal Banners in St Giles' Cathedral: The Royal Standard of the United Kingdom used in Scotland and (clockwise) those of the Duke of Edinburgh, Princess Royal and Duke of Rothesay.

The Royal Standard is reserved only for the monarch, and is the most used. Most famously it signals the presence of the monarch at a royal residence, and is also used on official vehicles, primarily the Bentley State Limousine, but also on other road vehicles at home or abroad, often a Range Rover. The Royal Standard is also flown from aircraft and water vessels, including HMY Britannia and MV Spirit of Chartwell [12] during the Thames Diamond Jubilee Pageant. The flag is also draped over the coffin of the Monarch upon his/her death.

In some situations, personal standards are displayed within the UK, such as within St Giles' Cathedral, Edinburgh, (site of the Chapel of the Order of the Thistle), and St George's Chapel, Windsor Castle home of Banners of Knights of the Order of the Garter,[13][14][15] at the Thames Diamond Jubilee Pageant Prince Andrew's standard flew from MV Havengore.[16]However, the use of personal standards of other members of the Royal Family varies in frequency. The Prince of Wales flies his standard at Clarence House in the same way the Royal Standard is used over Buckingham Palace, but other members of the family tend not to fly theirs from their respective residences (though this may be due to the fact that many share official London Residences, as is the case at Kensington Palace).

Family members also do not use their standards on road vehicles, neither privately or during official engagements (when more discreet cars are used, such as Jaguar) or state occasions (when the Liveried cars of the Royal Mews are used), this seems reserved for the Queen only, although when Prince Philip travels alone at state occasions, his standard flies from the roof of his car, as seen with the funerals of Diana, Princess of Wales (when the Queen Mother also flew her personal standard from her car) and that of the Queen Mother, also, when a visiting Head of State on a state visit uses a car from the Royal Mews, his/her own flag is displayed.[17][18] That said, when abroad, the standards of members of the family may well be flown: examples include Prince Charles,[19][20] the Duchess of Cornwall[21] and Prince William.[22][23] 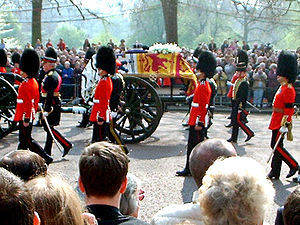 Funeral carriage of Queen Elizabeth The Queen Mother, with the coffin draped with her personal standard.75px

Personal Standards have been used to cover the coffins of The Queen Mother, Princess Margaret[24][25] and The Duke of Windsor.