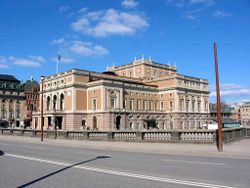 The Royal Swedish Opera. View from the Royal Palace across Norrbro bridge

The original building of the Royal Swedish Opera, Bollhuset at Slottsbacken in Stockholm, during the 1780s. From right to left: Stockholm Palace, Storkyrkan, Bollhuset Theatre and the Tessin Palace. Drawing, Martin Rudolf Heland.

The building is located in the center of Sweden's capital Stockholm in the borough of Norrmalm, on the eastern side of Gustav Adolfs torg across from the former Arvfurstens Palats, now Ministry for Foreign Affairs. It lies on the North side of the Norrström river and is connected to the Royal Palace through the Norrbro bridge.

Further historically as well as architecturally important buildings in the close neighborhood are the Sager House, official residence of the Prime Minister of Sweden, and the Riksdag building.

The opera company was founded by King Gustav III and its first performance, "Thetis and Phelée" with Carl Stenborg and Elisabeth Olin, was given on January 18, 1773; this was the first native speaking opera performed in Sweden.

But the first opera house was not opened until 1782 and served for a century before being replaced at the end of the 19th century. Both houses are officially called the "Royal Opera", however the terms "The Gustavian Opera" and "The Oscarian Opera", or the "Old" and "New" Opera are used when distinction is needed.

The original Stockholm Opera House, the work of architect Carl Fredrik Adelcrantz was commissioned by King Gustav III, a strong adherent of the ideal of an enlightened absolutism and as such was a great patron of the arts. The Swedish Opera company had first been located in Bollhuset, but there was a need to separate the Opera from the theatre and give them separate buildings. Construction began in 1775 and the theatre was inaugurated on 30 September 1782 with a performance of the German composer Johann Gottlieb Naumann's Cora och Alonzo. It was also the place for public masquerade balls, events inspired from the famous opera-balls in Paris, which was open for everyone wearing a mask at a cheap cost and somewhat ill-reputed. 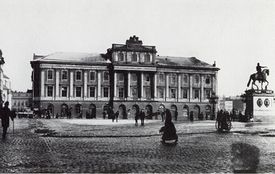 The Gustavian opera building in 1880.

The building was very imposing with its center Corinthian tetrastyle portico supporting four statues and topped by the royal crown. The four-tiered auditorium was oval in shape, had excellent acoustics and sight lines. The sumptuous foyer contained neoclassic medallions and pilasters.

It was in the foyer of the opera house where the king met his fate: during a masquerade on March 16, 1792, he was shot by Jacob Johan Anckarström, and died 7 days later. (In turn, this event inspired the opera Un Ballo in Maschera by Verdi.) Following the assassination, the opera house was closed until 1 November 1792, when it was opened again, which by some was considered shocking. The son of Gustav III, King Gustav IV Adolf of Sweden, did not like the Opera, possibly because of the murder of his father, and disliked the fact that the scene of his father's murder was used as a place of amusement and leisure, and when a frivolous play was performed for his queen Frederica of Baden in 1806, he decided to close it down. It remained closed until 1809, and when the king was deposed, it took until May 1812, before it was organised enough to be fully opened again. 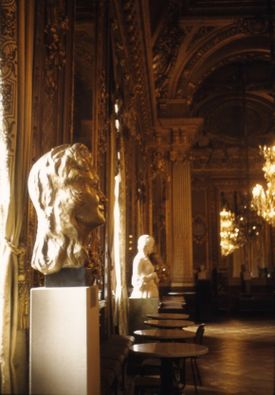 Operans Guldfoajén: The Golden Hall (with a bust of Swedish singer Birgit Nilsson) at the Royal Swedish Opera.

The old opera was demolished in 1892 to give way to the construction of a new Opera by Axel Johan Anderberg and it was finished seven years later, inaugurated by King Oscar II with a production of a Swedish opera (that tradition having been quite firmly established during the 19th century), Franz Berwald's Estrella de Soria.

The new house had the letters Kungl. Teatern, literally "Royal Theatre" (which caused the later-founded Royal Dramatic Theatre to add the distinction "dramatic" to its name). The building is now simply called Operan ("The Opera"), written in golden letters above the middle arch on the front facade. It is a majestic neo-classical building with a magnificent gold foyer (Guldfoajén) and elegant marble grand staircase leading to a three-tiered auditorium somewhat smaller than the old theatre. It presently seats 1,200. Most productions are now sung in the original language (with Swedish subtitles), with only a few in Swedish.

The Royal Swedish Family of King Carl XVI Gustaf keeps the Royal Box reserved, located in the first tier in the auditorium above the orchestra pit.

The Royal Swedish Ballet, Kungliga Baletten, was founded by Gustav III of Sweden in 1773.

The current General Manager of the Royal Swedish Opera is the Swedish mezzo soprano Birgitta Svendén. In November 2011, the Dutch conductor Lawrence Renes was named the next chief conductor of the company, as of the 2012-2013 season, with an initial contract through the 2016-2017 season.[3]