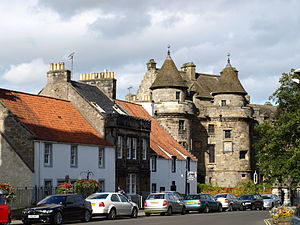 Falkland in Fife, created a royal burgh in 1458

A royal burgh was a type of Scottish burgh which had been founded by, or subsequently granted, a royal charter. Although abolished in law in 1975, the term is still used by many former royal burghs.[1]

Most royal burghs were either created by the Crown, or upgraded from another status, such as burgh of barony. As discrete classes of burgh emerged, the royal burghs—originally distinctive by virtue of the fact they were on royal lands—acquired a monopoly of foreign trade.

An important document for each burgh was its burgh charter, creating the burgh or confirming the rights of the burgh as laid down (perhaps verbally) by a previous monarch. Each royal burgh (with the exception of four 'inactive burghs') was represented in the Parliament of Scotland and could appoint bailies with wide powers in civil and criminal justice.[2] By 1707 there were 70 royal burghs.

The Royal Burghs Act 1833 reformed the election of the town councils that governed royal burghs. Those qualified to vote in parliamentary elections under the Reform Act 1832 were now entitled to elect burgh councillors.

Before the reign of David I Scotland had no towns. The closest thing to towns were the larger than average population concentrations around large monasteries, such as Dunkeld and St Andrews, and regionally significant fortifications. Scotland, outside Lothian at least, was populated by scattered hamlets, and outside that area, lacked the continental style nucleated village. David I established the first burghs in Scotland, initially only in Middle-English-speaking Lothian (note:Tain claims a charter dating from 1066 under Malcolm III)[citation needed]. The earliest burghs, founded by 1124, were Berwick and Roxburgh. However, by 1130, David had established burghs in Gaelic areas: Stirling, Dunfermline, Perth and Scone, as well as Edinburgh. The conquest of Moray in that same year led to the establishment of burghs at Elgin and Forres. Before David was dead, St Andrews, Montrose, and Aberdeen were also burghs. In the reigns of Máel Coluim IV and William, burghs were added at Inverness, Banff, Cullen, Auldearn, Nairn, Inverurie, Kintore, Brechin, Forfar, Arbroath, Dundee, Lanark, Dumfries and (uniquely for the west coast)[why?] Ayr. New Lothian burghs also came into existence, at Haddington and Peebles. By 1210, there were 40 burghs in the Scottish kingdom. Rosemarkie, Dingwall and Cromarty were also burghs by the Scottish Wars of Independence.

David I established the first burghs, and their charters and Leges Burgorum (rules governing virtually every aspect of life and work in a burgh) were copied almost verbatim from the customs of Newcastle upon Tyne.[citation needed] He essentially imported the burgh into his "Scottish" dominions from his English ones. Burghs were for the most part populated by foreigners, rather than native Scots or even Lothianers. The predominant ethnic group were the Flemings, but early burgesses were also English, French and German. The burgh's vocabulary was composed totally of either Germanic terms (not necessarily or even predominantly English) such as croft, rood, gild, gait and wynd, or French ones such as provost, bailie, vennel, port and ferme. The councils that governed individual burghs were individually known as lie doussane, meaning the dozen. 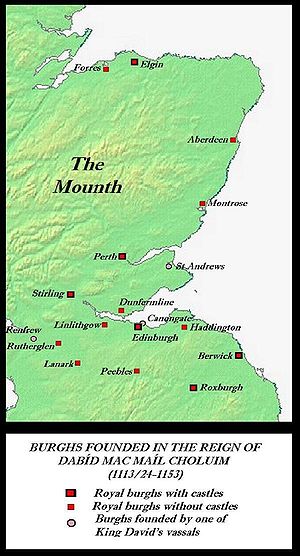 By 1153 (Burghs passing between the king and other lords)

By 1153 (Burghs controlled by other lords)

By 1214 (Burghs passing between the king and other lords)

By 1214 (Burghs controlled by other lords)

By 1300 (Burghs controlled by other lords)

Burghs created by Charles I

Abolition and status since 1975

The rights of the royal burghs were preserved (if not guaranteed) by Article XXI of the Treaty of Union between Scotland and England of 1707,[5] which states "That the Rights and Privileges of the Royal Boroughs in Scotland as they now are Do Remain entire after the Union and notwithstanding thereof".

The issue of the future status of royal burghs was discussed during debate on the Local Government Bill. In the Commons on 4 December 1972 Ronald Murray (MP for Edinburgh, Leith) stated

Most of the well-known cities and towns of Scotland became royal burghs by Charter. The Bill does not say that those Charters are removed or are of no legal effect, but Schedule 24 repeals the legislation upon which they appear to stand. I hope that the Government do not intend to abolish entirely the ancient rights of royal burghs, at least to be royal burghs.'[6]

In June 1973, David Steel (MP for Roxburgh, Selkirk and Peebles), unsuccessfully introduced an amendment that

the title of "Provost" shall attach to the chairman of any community council which is based on any existing burgh .. to .. carry forward a title which appears, for example, in the Royal Charters of those burghs".[7]

why a community council for a former Royal burgh is not able to use the words "Royal Burgh" in its title; and what scope there is for the continuance of historical titles under the present organisation of local authorities.

The title which may be used by a community council is a matter for the district council to decide when drawing up the scheme for community councils in its area. Section 23 of the Local Government (Scotland) Act 1973 governs any change of name of region, islands or district councils. There is no statutory ban to the continuance of historic titles for other purposes.[8]

Accordingly, some community councils established since 1975 have the term "Royal Burgh" incorporated in their title.[9] Lord Lyon has permitted the armorial bearings of a number of royal burghs to be rematriculated by community councils.[10]