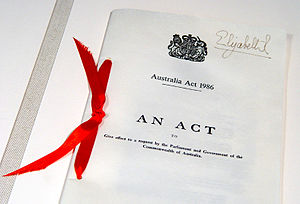 The signature of King Edward VIII as King-Emperor

The royal sign-manual is the signature of the sovereign, by the affixing of which the monarch expresses his or her pleasure either by order, commission, or warrant. A sign-manual warrant may be either an executive act—for example, an appointment to an office—or an authority for affixing the Great Seal of the pertinent realm. The sign-manual is also used to give power to make and ratify treaties. "Sign manual", with or without hyphen, is an old term for a hand-written signature in general.

The royal sign-manual usually consists of the sovereign's regnal name (without number, if otherwise used), followed by the letter R for Rex (King) or Regina (Queen). Thus, the signs-manual of both Elizabeth I and Elizabeth II read Elizabeth R. When the British monarch was also Emperor or Empress of India, the sign manual ended with R I, for Rex/Regina Imperator/Imperatrix (King/Queen-Emperor/Empress).

Other letters patent, due to the nature of their contents (such as those that authorise the expenditure of money, or those that signify Royal Assent to Acts of Parliament), require the royal sign-manual to be affixed directly to them. Such letters patent contain, at the bottom, the words: "By the King/Queen Him/Herself, Signed with His/Her own hand." The royal sign-manual is usually placed by the sovereign at the top of the document. These papers usually must be countersigned by a principal secretary of state or other responsible minister.

In some cases the use of the sign-manual has been dispensed with and a stamp affixed in lieu thereof, as in the case of George IV, whose bodily infirmity made the act of signing difficult and painful during the last weeks of his life. The Royal Signature by Commission Act 1830 (11 Geo. IV & 1 Will. IV c. 23) was passed providing that a stamp might be affixed in lieu of the sign-manual, but the sovereign had to express his consent to each separate use of the stamp, the stamped document being attested by a confidential servant and several officers of State.[1]