It is situated on the Greenwich Meridian, which brushes the town's eastern boundary, and at the northernmost apex of the county on the same latitude as towns such as Milton Keynes and Ipswich. It is located 43 miles (69 km) north of central London in a rural area.

Before the boundary changes of the 1890s, the boundary between Hertfordshire and Cambridgeshire ran east-west through the centre of town along the middle of Melbourn Street. The town has a population of 15,781.[1] 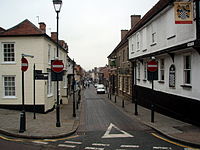 The town grew at the crossing of two ancient thoroughfares, Ermine Street and the Icknield Way (cum Ashwell Street); the former was created after the Roman conquest, while the Icknield Way has long been accepted as a prehistoric routeway. The roads are sometimes called military roads as they were prepared or improved by Roman soldiers to facilitate access to the hinterland of Roman Britain. The modern equivalent to Icknield Way is the A505 which bypasses the town to the north. The A10 follows the alignment of Ermine Street south of the town, but diverts before it reaches the crossroads. The A1198, known as the Old North Road follows the alignment of Ermine Street northwards. Barrows on Goffers Knoll and Therfield Heath are evidence of prehistoric settlement.

A cross, variously known as Royse's, Rohesia's, or Roisia's Cross, was erected by the crossroads at an unknown date. It gave the settlement its earliest name of Crux Roesia or Roisia's Cross. By the 14th century this had become Roisia's Town, Roiston or Royston.[2][3] A large boulder of red millstone grit, bearing a square socket, supposed to be the base of the cross, has been placed by the cross roads at the northern end of High Street.[3]

Until 1540 the "vill" of Royston was divided between five parishes: Barkway, Reed and Therfield in Hertfordshire and Melbourn and Kneesworth in Cambridgeshire. In that year it became a separate ecclesiastical parish, partly in each county.[2]

Ralph de Rochester founded the Augustinian priory which originated as a chapel for three canons and was later expanded to seven or more regular canons. Royston had two hospitals or free chapels, as well as the monastery.

The hospital of St John and St Thomas was founded for lepers in 1224 by Richard Argentine, Sheriff of Cambridgeshire on the south side of Baldock Street.[2]

The hospital of St Nicholas was situated in the Cambridgeshire side of Royston. It was founded in about 1200 probably by Amphelise, a daughter of Richard the Chamberlain. In 1213 King John granted a fair to celebrate the feast of St Nicholas (8–9 May). The patronage of the hospital descended to Sir Giles Argentine, lord of the manor of Melbourn, who also held the patronage of the other hospital. In the 14th century, St Nicholas' Hospital was put under the same jurisdiction as that of St John and St Thomas. The whole was suppressed in 1547.[2][4]

The town having lost its monastic charter, the priory site was obtained by Robert Chester, a gentleman of the bedchamber to Henry VIII, who set up a market. Much of the town was given over to inns catering for travellers mainly travelling between London and York. 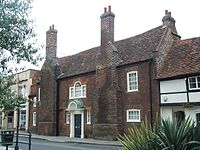 On 29 April 1603 James VI of Scotland travelling to London to be crowned King James I of England, paused overnight at the Chester residence. His grandmother, Mary of Guise, had stayed there in 1551.[5] Attracted by the suitability of the area for hunting, James hired the house for a year. In 1604 he decided to create a hunting lodge in the town by demolishing the "Cock" and "Greyhound" inns. The king's lodgings were completed in 1607, and were described in 1652 as "all of brick well-tiled double-built, in length 78 ft., breadth 43 ft., height from eaves to ground 24 ft., thickness of walls 24 inches."[2] The buildings were never extensive enough to cater for a full court, but provided a suitable spot for hunting, near enough to London for convenience and sufficiently far away to deter intrusion. The king created a strict prohibition on anyone from taking game from within 16 miles of Royston, and an elaborate infrastructure was established to support him in the pursuit of his sport. He returned almost every year to hunt and shoot.[2]

Queen Anne and Prince Henry visited the town once, in 1611–1612. Next year the queen opposed the marriage of her daughter, Princess Elizabeth to Frederick V, Elector Palatine, but the king came to Royston with the Earl of Rochester to negotiate the dowry which was signed there. Following the marriage, celebrated on St Valentine's Day 1613, the king, Prince Charles and Frederick came to stay at Royston.[2]

James' successor, Charles I visited Royston less frequently than his father. In June 1647 he was brought through the town as a prisoner of the Parliamentary army. After Charles's death the royal buildings fell into disrepair. The Crown sold its last interests in the town in 1866.[2]

After you quit Ware...the land grows by degrees poorer; the chalk lies nearer and nearer to the surface, till you come to the open common-fields within a few miles of Royston [which] is at the foot of this high poor land; or, rather in a dell, the open side of which looks towards the North. It is a common market town. Not mean, but having nothing of beauty about it...

Royston had a bank from about 1806 to 1896, when it merged into the grouping that became Barclays. It was founded by Edward King Fordham and others, and the business was run by the influential local Fordham family.[6]

Royston Town Council was formed in 1974 as the successor to Royston Urban District Council. The council consists of fifteen councillors headed by a town mayor (currently Mayor Victoria Hulstrom-Allen 2014/2015)[7] The councillors are elected for three wards named Heath, Meridian and Palace. Among the town council's responsibilities are allotments, Royston Cave, Royston Museum, local festivals, public halls and the town's war memorial.[8] In December 2007 Royston Town Council was awarded the nationally recognised status of Quality Town Council. This Award confirms that Royston Town Council is run in accordance with the high standards required by the National Association of Local Councils and other government bodies.

The town council uses the coat of arms granted to the urban district council in 1952.[8] The blazon of the arms is:
Argent a fesse gules thereon another chequy of the first and sable in chief two Tudor roses barbed and seeded and in the base a stag trippant the whole surmounting an archiepiscopal staff, all proper. And for a crest on a wreath of the colours, perched upon a representation of the Royse Stone, a hooded crow proper.[9]

The symbols on the shield briefly illustrate the history of the town. The staff is for Royston Priory, the roses for Tudor connections, while James I is represented by the checky fesse of the Stewarts. The hart represents Hertfordshire. The crest depicts a hooded crow, known within the region as a "Royston crow".[10] He stands on the "Royce Stone" in the town centre.[11]

Since 1974 Royston has formed part of the non-metropolitan district of North Hertfordshire. The council is based at Letchworth, and also includes the towns of Baldock and Hitchin. There are 49 district councillors elected for 24 wards. The three wards of Royston Heath, Royston Meridian and Royston Palace return 2 councillors each. As of 2011 five councillors are members of the Conservative Party and one is a Liberal Democrat.[12]

Hertfordshire County Council has 77 councillors, of which one is elected for the Royston electoral division. The current councillor (as of 2008) is a member of the majority Conservative group.[13]

The town lies on the northern slopes of the Hertfordshire Chalk Downs.[2] The Greenwich Meridian passes through the point where the bypass meets the original A505 alignment. The town centre is just 1-minute 27 seconds west of the meridian.

Although not immune from the economic problems of the past few years, Royston retains a varied town centre with a range of businesses and fewer empty shop-fronts than most comparable towns, although this is largely as there aren't many shops there to start with. A large, relatively recently built supermarket on the edge of town has inevitably had a large effect on local trade, but the town centre has survived to a great extent. This can be attributed to the fact that Royston and the surrounding villages are not completely dependent upon commuting, but are home to thriving blue collar enterprises with industrial estates on the north of the town. There is also an active Chamber of Commerce.

Royston sits at the junction of the A10 and A505 roads, both of which are important road links through Hertfordshire and beyond. The town is also convenient for fast links to London and the north, as it is only a short distance from both the A1(M) and M11 motorways.

Air transport links located nearby include both London Luton and London Stansted airports, both of which are major air hubs in the south of England.

The Royston railway station provides direct commuter links to both London and Cambridge. It is on the Cambridge Line and is a stopping point for regular services operated by Great Northern Route.

A new rail crossing for pedestrians and cyclists was opened in 2012. The crossing links the northern part of the town with the leisure centre and the main complex of schools. Two options were proposed, a bridge with an estimated cost of £1.5m and the eventually successful subway option estimated at £3.25m. Two locations were also under consideration; one at the ‘Coombes Hole’ allotment gardens area and a second connecting Green Street and Morton Street. Sustrans elected to build a subway at 'Coombes Hole' allotment gardens.[14]

Royston's school are arranged as:

The public open space and nature reserve of Therfield Heath (also known as Royston Heath) overlooks the town from a hill to the south-west. Mainly used by doggers, tokers and dog walkers.

The Icknield Way Path passes through the village on its 110 mile journey from Ivinghoe Beacon in Buckinghamshire to Knettishall Heath in Suffolk.

one of the carvings from the cave
Main article: Royston Cave

In 1742 a strange cave carved out of the chalk was discovered in the centre of Royston. Royston Cave is located underneath the central crossroads of the town. The carvings in the cave have led to much speculation about the origin and function of the cave.

The Battle of Royston was a fictive battle in William Le Queux' The Invasion of 1910. The book describes how a German Army invades England through East Anglia and marches on London. Royston is where a fictional battle takes place which fails to halt their advance.

Royston Arts Festival was revived in 2007 and now runs annually around the last week of September or the first week of October.[17]

Royston Town Band is a brass band that was founded in the mid-19th century as the Royston Volunteer Band. The band celebrated its 150th anniversary in 2014.[18]

Royston Sports Club situated on the heath is the home to the tows tennis, squash, hockey and rugby clubs as well as the youth football. Royston Rugby club's 1st XV play in the Herts/Middlesex 1st division,[19] its Girl's U15 side has won the Herts Shield for the last two seasons.