From Infogalactic: the planetary knowledge core
(Redirected from Rubies)
Jump to: navigation, search
This article is about the mineral or gem. For other uses, see Ruby (disambiguation).

A ruby is a pink to blood-red colored gemstone, a variety of the mineral corundum (aluminium oxide). The red color is caused mainly by the presence of the element chromium. Its name comes from ruber, Latin for red. Other varieties of gem-quality corundum are called sapphires. Ruby is considered one of the four precious stones, together with sapphire, emerald and diamond.[3]

Prices of rubies are primarily determined by color.The brightest and most valuable "red" called blood-red or "pigeon blood", commands a large premium over other rubies of similar quality. After color follows clarity: similar to diamonds, a clear stone will command a premium, but a ruby without any needle-like rutile inclusions may indicate that the stone has been treated. Cut and carat (weight) are also an important factor in determining the price. Ruby is the traditional birthstone for July and is always lighter red or pink than garnet. The world's most expensive ruby is the Sunrise Ruby. 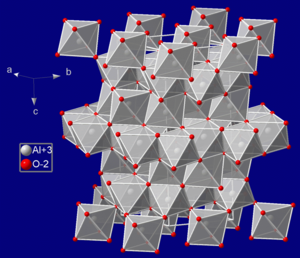 Rubies have a hardness of 9.0 on the Mohs scale of mineral hardness. Among the natural gems only moissanite and diamond are harder, with diamond having a Mohs hardness of 10.0 and moissanite falling somewhere in between corundum (ruby) and diamond in hardness. Ruby is α-alumina (the most stable form of Al2O3) in which a small fraction of the aluminum3+ ions are replaced by chromium3+ ions. Each Cr3+ is surrounded octahedrally by six O2− ions. This crystallographic arrangement strongly affects each Cr3+, resulting in light absorption in the yellow-green region of the spectrum and thus in the red color of the gem. When yellow-green light is absorbed by Cr3+, it is re-emitted as red luminescence.[4] This red emission adds to the red color perceived by the subtraction of green and violet light from white light, and adds luster to the gem's appearance. When the optical arrangement is such that the emission is stimulated by 694-nanometer photons reflecting back and forth between two mirrors, the emission grows strongly in intensity. This effect was used by Theodore Maiman in 1960 to make the first successful laser, based on ruby.

All natural rubies have imperfections in them, including color impurities and inclusions of rutile needles known as "silk". Gemologists use these needle inclusions found in natural rubies to distinguish them from synthetics, simulants, or substitutes. Usually the rough stone is heated before cutting. Almost all rubies today are treated in some form, with heat treatment being the most common practice. However, rubies that are completely untreated but still of excellent quality command a large premium.

Some rubies show a three-point or six-point asterism or "star". These rubies are cut into cabochons to display the effect properly. Asterisms are best visible with a single-light source, and move across the stone as the light moves or the stone is rotated. Such effects occur when light is reflected off the "silk" (the structurally oriented rutile needle inclusions) in a certain way. This is one example where inclusions increase the value of a gemstone. Furthermore, rubies can show color changes—though this occurs very rarely—as well as chatoyancy or the "cat's eye" effect.

Generally, gemstone-quality corundum in all shades of red, including pink, are called rubies.[5][6] However, in the United States, a minimum color saturation must be met to be called a ruby, otherwise the stone will be called a pink sapphire.[5] This distinction between rubies and pink sapphires is relatively new, having arisen sometime in the 20th century. If a distinction is made, the line separating a ruby from a pink sapphire is not clear and highly debated.[7] As a result of the difficulty and subjectiveness of such distinctions, trade organizations such as the International Colored Gemstone Association (ICGA) have adopted the broader definition for ruby which encompasses its lighter shades, including pink.[8][9]

The Mogok Valley in Upper Myanmar (Burma) was for centuries the world's main source for rubies. That region has produced some of the finest rubies ever mined, but in recent years very few good rubies have been found there. The very best color in Myanmar rubies is sometimes described as "pigeon's blood." In central Myanmar, the area of Mong Hsu began producing rubies during the 1990s and rapidly became the world's main ruby mining area. The most recently found ruby deposit in Myanmar is in Namya (Namyazeik) located in the northern state of Kachin.

A few rubies have been found in the U.S. states of Montana, North Carolina, South Carolina and Wyoming. While searching for aluminous schists in Wyoming, geologist Dan Hausel noted an association of vermiculite with ruby and sapphire and located six previously undocumented deposits.[11]

More recently, large ruby deposits have been found under the receding ice shelf of Greenland.[citation needed]

Republic of Macedonia is the only country in mainland Europe to have naturally occurring rubies. They can mainly be found around the city of Prilep. Macedonian ruby has a unique raspberry color. The ruby is also included on the Macedonian Coat of Arms.

In 2002 rubies were found in the Waseges River area of Kenya. There are reports of a large deposit of rubies found in 2009 in Mozambique, in Nanhumbir in the Cabo Delgado district of Montepuez.[12]

Spinel, another red gemstone, is sometimes found along with rubies in the same gem gravel or marble. Red spinel may be mistaken for ruby by those lacking experience with gems. However, the finest red spinels can have a value approaching that of the average ruby.[13]

Diamonds are graded using criteria that have become known as the four Cs, namely color, cut, clarity and carat weight. Similarly natural rubies can be evaluated using the four Cs together with their size and geographic origin.

Color: In the evaluation of colored gemstones, color is the most important factor. Color divides into three components: hue, saturation and tone. Hue refers to "color" as we normally use the term. Transparent gemstones occur in the following primary hues: red, orange, yellow, green, blue, violet. These are known as pure spectral hues.[14] In nature, there are rarely pure hues, so when speaking of the hue of a gemstone, we speak of primary and secondary and sometimes tertiary hues. In ruby, the primary hue must be red. All other hues of the gem species corundum are called sapphire. Ruby may exhibit a range of secondary hues. Orange, purple, violet and pink are possible.

The finest ruby is best described as being a vivid medium-dark toned red. Secondary hues add an additional complication. Pink, orange, and purple are the normal secondary hues in ruby. Of the three, purple is preferred because, firstly, the purple reinforces the red, making it appear richer.[14] Secondly, purple occupies a position on the color wheel halfway between red and blue. In Burma where the term 'pigeon blood' originated, rubies are set in pure gold. Pure gold is itself a highly saturated yellow. When a purplish-red ruby is set in yellow, the yellow neutralizes its complement blue, leaving the stone appearing to be pure red in the setting.[citation needed]

Improving the quality of gemstones by treating them is common practice. Some treatments are used in almost all cases and are therefore considered acceptable. During the late 1990s, a large supply of low-cost materials caused a sudden surge in supply of heat-treated rubies, leading to a downward pressure on ruby prices.

Improvements used include color alteration, improving transparency by dissolving rutile inclusions, healing of fractures (cracks) or even completely filling them.

The most common treatment is the application of heat. Most, if not all, rubies at the lower end of the market are heat treated on the rough stones to improve color, remove purple tinge, blue patches and silk. These heat treatments typically occur around temperatures of 1800 °C (3300 °F).[15] Some rubies undergo a process of low tube heat, when the stone is heated over charcoal of a temperature of about 1300 °C (2400 °F) for 20 to 30 minutes. The silk is only partially broken as the color is improved.

Another treatment, which has become more frequent in recent years, is lead glass filling. Filling the fractures inside the ruby with lead glass (or a similar material) dramatically improves the transparency of the stone, making previously unsuitable rubies fit for applications in jewelry.[16] The process is done in four steps:

If a color needs to be added, the glass powder can be "enhanced" with copper or other metal oxides as well as elements such as sodium, calcium, potassium etc.

The second heating process can be repeated three to four times, even applying different mixtures.[18] When jewelry containing rubies is heated (for repairs) it should not be coated with boracic acid or any other substance, as this can etch the surface; it does not have to be "protected" like a diamond.

The treatment can easily be determined using a 10x loupe and determination focuses on finding bubbles either in the cavities or in the fractures that were filled with glass.[19]

Artificial ruby under a normal light (top) and under a green laser light (bottom). Red light is emitted

In 1837 Gaudin made the first synthetic rubies by fusing potash alum at a high temperature with a little chromium as a pigment. In 1847 Ebelmen made white sapphire by fusing alumina in boric acid. In 1877 Frenic and Freil made crystal corundum from which small stones could be cut. Frimy and Auguste Verneuil manufactured artificial ruby by fusing BaF2 and Al2O3 with a little chromium at red heat. In 1903 Verneuil announced he could produce synthetic rubies on a commercial scale using this flame fusion process.[20] By 1910, Verneuil's laboratory had expanded into a 30 furnace production facility, with annual gemstone production having reached 1,000 kilograms (2,000 lb) in 1907.

Other processes in which synthetic rubies can be produced are through Czochralski's pulling process, flux process, and the hydrothermal process. Most synthetic rubies originate from flame fusion, due to the low costs involved. Synthetic rubies may have no imperfections visible to the naked eye but magnification may reveal curves, striae and gas bubbles. The fewer the number and the less obvious the imperfections, the more valuable the ruby is; unless there are no imperfections (i.e., a "perfect" ruby), in which case it will be suspected of being artificial. Dopants are added to some manufactured rubies so they can be identified as synthetic, but most need gemological testing to determine their origin.

Synthetic rubies have technological uses as well as gemological ones. Rods of synthetic ruby are used to make ruby lasers and masers. The first working laser was made by Theodore H. Maiman in 1960[21] at Hughes Research Laboratories in Malibu, California, beating several research teams including those of Charles H. Townes at Columbia University, Arthur Schawlow at Bell Labs,[22] and Gould at a company called TRG (Technical Research Group). Maiman used a solid-state light-pumped synthetic ruby to produce red laser light at a wavelength of 694 nanometers (nm). Ruby lasers are still in use. Rubies are also used in applications where high hardness is required such as at wear exposed locations in modern mechanical clockworks, or as scanning probe tips in a coordinate measuring machine.

Imitation rubies are also marketed. Red spinels, red garnets, and colored glass have been falsely claimed to be rubies. Imitations go back to Roman times and already in the 17th century techniques were developed to color foil red—by burning scarlet wool in the bottom part of the furnace—which was then placed under the imitation stone.[23] Trade terms such as balas ruby for red spinel and rubellite for red tourmaline can mislead unsuspecting buyers. Such terms are therefore discouraged from use by many gemological associations such as the Laboratory Manual Harmonisation Committee (LMHC).