Ruta graveolens — commonly known as rue, common rue or herb-of-grace — is a species of Ruta grown as an ornamental plant and as an herb. It is native to the Balkan Peninsula. It is now grown throughout the world in gardens, especially because of its bluish leaves, and also sometimes for its tolerance of hot and dry soil conditions. It is also cultivated as a medicinal herb, as a condiment, and to a lesser extent as an insect repellent. 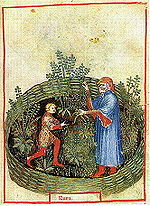 Illustration in the Tacuinum Sanitatis

The Tacuinum Sanitatis, a medieval handbook on wellness, lists these properties of rue:

The refined oil of rue is an emmenagogue[1] and was cited by the Roman historian Pliny the Elder and the gynecologist Soranus as a potent abortifacient (inducing abortion).[citation needed] 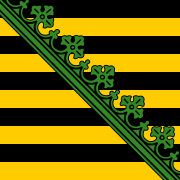 In Kashmiri house, Rue seeds (local Kashmiri name "Izband" ) are roasted and fumes from seeds are spread across all rooms of house to keep evil away on special occasions like birthday, marriages etc.Also helps as insect repellent.[2][3] 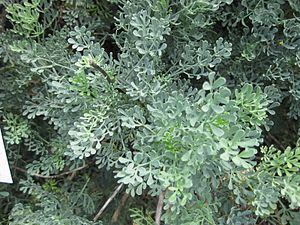 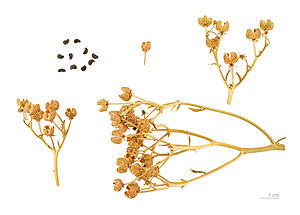 Rue does have a culinary use if used sparingly, but it is bitter and gastric discomfort may be experienced by some individuals. Although used more extensively in former times, it is not an herb that is typically found in modern cuisine, and is today largely unknown to the general public and most chefs, and unavailable in grocery stores.[4] It is a component of berbere, the characteristic Ethiopian spice mixture, and as such is encountered in Ethiopian cuisine.

Rue is also grown as an ornamental plant, both as a low hedge and so the leaves can be used in nosegays.

Most cats dislike the smell of it, and it can therefore be used as a deterrent to them (see also Plectranthus caninus).

Caterpillars of some subspecies of the butterfly Papilio machaon feed on rue, as well as other plants. The caterpillars of Papilio xuthus also feed readily on it.[7]

In South India, rue is recommended for home gardens to repel snakes (however the effectiveness is unknown).

Exposure to common rue, or herbal preparations derived from it, can cause severe phytophotodermatitis which results in burn-like blisters on the skin.[8][9][10][11]

Effect of the common rue on skin in hot weather 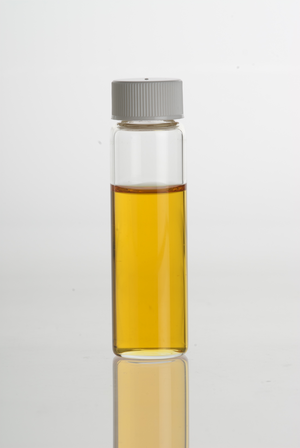 A series of furanoacridones and of two acridone alkaloids (arborinine and evoxanthine) have been isolated from R. graveolens.[12] It also contains coumarins and limonoids.[13]

The chloroform extracts of the root, stem and leaf shows the isolation of the furanocoumarin chalepensin.[17]

The bitter taste of its leaves led to rue being associated with the (etymologically unrelated) verb rue "to regret". Rue is well known for its symbolic meaning of regret and it has sometimes been called "herb-of-grace" in literary works. It is one of the flowers distributed by the mad Ophelia in William Shakespeare's Hamlet (IV.5):

"There's fennel for you, and columbines:
there's rue for you; and here's some for me:
we may call it herb-grace o' Sundays:
O you must wear your rue with a difference..."

It was planted by the gardener in Richard II to mark the spot where the Queen wept upon hearing news of Richard's capture (III.4.104–105):

"Here did she fall a tear, here in this place
I'll set a bank of rue, sour herb of grace."

It is also given by the rusticated Perdita to her disguised royal father-in-law on the occasion of a sheep-shearing (Winter's Tale, IV.4):

"For you there's rosemary and rue; these keep
Seeming and savour all the winter long."

It is used by Michael in Milton's Paradise Lost to give Adam clear sight (11.414):

"Then purg'd with euphrasy and rue
The visual nerve, for he had much to see."

Rue is used by Gulliver in "Gulliver's Travels" (by Jonathan Swift) when he returns to England after living among the "Houyhnhnms". Gulliver can no longer stand the smell of the English Yahoos (people), so he stuffs rue or tobacco in his nose to block out the smell. "I was at last bold enough to walk the street in his (Don Pedro's) company, but kept my nose well with rue, or sometimes with tobacco".

Rue is mentioned in the Bible, Luke 11.42: "But woe unto you, Pharisees! For ye tithe mint and rue and all manner of herbs".

In mythology,[clarification needed] the basilisk, whose breath could cause plants to wilt and stones to crack, had no effect on rue. Weasels who were bitten by the basilisk would retreat and eat rue in order to recover and return to fight.

Rue is considered a national herb of Lithuania and it is the most frequently referred herb in Lithuanian folk songs, as an attribute of young girls, associated with virginity and maidenhood. It was common in traditional Lithuanian weddings for only virgins to wear a rue (ruta) at their wedding, a symbol to show their purity. Likewise, rue is prominent in the Ukrainian folklore, songs and culture.