Rufus Daniel Isaacs, 1st Marquess of Reading GCB GCSI GCIE GCVO PC KC (10 October 1860 – 30 December 1935) was the Viceroy of India (1921–25), barrister, jurist and the last member of the official Liberal Party to serve as Foreign Secretary. He was the second practising Jew to be a member of the British cabinet (the first being Herbert Samuel,[1] who was also a member of the Asquith Government), the first Jew to be Lord Chief Justice of England, and the first British Jew to be raised to a marquessate.

The son of a Jewish fruit merchant at Spitalfields, Rufus Daniel Isaacs was educated at University College School and then entered the family business at the age of 15. In 1876–77 he served as a ship's boy and later worked as a jobber on the stock-exchange from 1880–84.

In 1887 he married Alice Edith Cohen, who suffered from a chronic physical disability and died of cancer in 1927, after 40 years of marriage, and a year after Reading's Indian viceroyalty ended. He then married Stella Charnaud, the first Lady Reading's secretary. His second marriage lasted until his own death in 1935. After his death Stella Isaacs was made Dame Commander of the Order of the British Empire (DBE) in 1941,[4] promoted to Dame Grand Cross (GBE) in 1944,[5] and then in 1958 made a life peeress as Baroness Swanborough, of Swanborough in the County of Sussex.

Lord Reading died in London in December 1935 aged 75. After cremation at Golders Green Crematorium his ashes were buried at the nearby Jewish cemetery.[7] The house where he died, No. 32 Curzon Street in Mayfair, has had a blue plaque on it since 1971.[8] 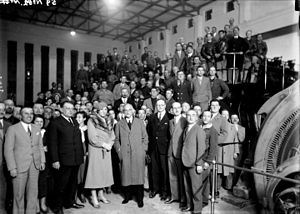 Lord Reading and his wife at Haifa Power Station, 1930s

Isaacs garnered fame in the Bayliss v. Coleridge libel suit in 1903,[9] and the Whitaker Wright case in 1904. In 1904, he entered the House of Commons as Liberal Party Member of Parliament (MP) for the Reading constituency, a seat he held until 1913. During this period, he served as both Solicitor General and Attorney-General in the government of Herbert Henry Asquith, becoming the first Attorney-General to sit in the Cabinet in 1912. He led for the prosecution in the Seddon poisoning case in 1912 and that same year represented the Board of Trade at the inquiry into the sinking of the RMS Titanic. In 1913, he was made Lord Chief Justice, a position in which he served until 1921.

Isaacs was one of several high-ranking members of the Liberal government accused of involvement in the Marconi scandal.[10] An article published in Le Matin on 14 February 1913 alleged corruption in the award of a government contract to the Marconi Company and insider trading in Marconi's shares, implicating a number of sitting government ministers, including Lloyd George, the Chancellor of the Exchequer; Isaacs, then Attorney General; Herbert Samuel, Postmaster General; and the Treasurer of the Liberal Party, the Master of Elibank, Lord Murray.[11] The allegations included the fact that Isaacs' brother, Godfrey Isaacs, was managing director of the Marconi company at the time that the cabinet, in which Isaacs sat, awarded Marconi the contract.[12][13] Isaacs and Samuels sued Le Matin for libel, and as a result, the journal apologised and printed a complete retraction in its 18 February 1913 issue.[11][14][15] The factual matters were at least partly resolved by a parliamentary select committee investigation, which issued three reports: all found that Isaacs and others had purchased shares in the American Marconi company, but while the fellow-Liberal members of the committee cleared the ministers of all blame, the opposition members reported that Isaacs and others had acted with "grave impropriety".[11] It was not made public during the trial that these shares had been made available through Isaacs's brother at a favourable price.[16]

In 1918, Isaacs was appointed Ambassador to the United States, a position in which he served until 1919, while continuing at the same time as Lord Chief Justice. In 1921, he resigned the chief justiceship to become Viceroy of India. Although he preferred a conciliatory policy, he ended up using force on several occasions, and imprisoned Mahatma Gandhi in 1922. In MacDonald's National Government in August 1931, he briefly served as Secretary of State for Foreign Affairs, but stood down after the first major reshuffle in November due to ill-health.

In his approach to politics, Isaacs was, according to Denis Judd,

“no blood-red Radical, and had ‘little sympathy with the narrower aspects of the Nonconformist outlook which constituted so powerful an element in contemporary Liberalism.’ Liberalism, none the less, was the natural party for him to support. Within his own father’s lifetime Jews had been obliged to struggle to obtain full civil rights. Moreover, the Liberal party apparently stood for the noble principles of liberty, toleration and progress whereas the Tories, although somewhat disguised with the Unionist coalition, seemed to offer little in the way of enlightened policies. For a man who approved of social reform, yet wanted to stop well short of revolution, the Liberal party was the obvious home.”[17]

Indeed, Isaacs championed such measures as the taxation of land values and reforms in the legal standing of unions, education, licensing, and military organization.[18] Isaacs also gave staunch official backing to David Lloyd George’s initiative on land reform, together with his tax on land values[19] and national social insurance scheme.[20]

Along with his in-law Alfred Mond and Herbert Samuel, Isaacs was a founding chairman of the Palestine Electric Corporation, precursor to the Israel Electric Corporation in the British Mandate of Palestine. The Reading Power Station in Tel Aviv, Israel was named in his honour.