The Borough of Rugby is a local government district with borough status in eastern Warwickshire, England.

The borough comprises the town of Rugby where the council has its headquarters, and the rural areas surrounding the town.

The borough has a population of just over 91,000. Of these, over 60,000 live in the town of Rugby, with the remainder living in the rural areas surrounding the town.

The borough stretches from Coventry to the west, to the borders with Northamptonshire and Leicestershire to the east. It borders the Warwickshire districts of Warwick to the south-west, Stratford to the south, and Nuneaton and Bedworth to the north-west.

The present borough was created on 1 April 1974 by the Local Government Act 1972. It was created by a merger of the municipal borough of Rugby (which covered the town of Rugby) and the Rugby Rural District.

The town of Rugby had gained the status of an urban district in 1894.[2] At the same time the Rugby Rural District was created covering the surrounding countryside. The town and rural district had separate councils, both based in Rugby.

In 1932, Rugby's status was upgraded to that of a municipal borough, and its boundaries expanded to include most of Bilton, Brownsover, Hillmorton and Newbold-on-Avon. 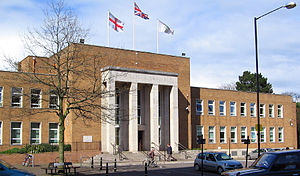 The headquarters of Rugby Borough Council are based at Rugby Town Hall on Evereux Way in the town centre. The last elections to the council were held in May 2007 (see Rugby local elections).

One third of council seats are elected every year, with one year without an election. The political makeup of the council in the past few elections has been:

The borough is divided into 20 wards, with 48 councillors. For a list of wards in Rugby borough by population see here.

The borough of Rugby has 39 civil parishes, some of which contain several settlements. Rugby town is unparished and so does not have a separate town council.

Places in the borough include: