The Rugby League World Cup is an international rugby league tournament, contested by national teams of the Rugby League International Federation, which was first held in France in 1954, the first World Cup in either rugby code.[1] The idea of a rugby league world cup tournament was first mooted in the 1930s with the French proposing holding a tournament in 1931, and again in 1951.[2] The fourteen tournaments held to date have been at intervals ranging from two to eight years, and have featured a number of different formats.[3] So far three nations have won the competition (Australia ten times, Great Britain three times and New Zealand once). Australia, France and New Zealand are the only teams to have played in all tournaments (Great Britain has been split into England, Wales, Scotland and Ireland since 1995, while England and Wales had previously competed as separate teams in the 1975 World Cup). Since 2000, the RLIF has also organised World Cups for women, students and other categories. The 2013 Rugby League World Cup was held in England, France, Ireland and Wales[4] and won by Australia.[5]

The Rugby League World Cup was an initiative of the French who had been campaigning for a competition since 1935. The idea was raised in 1951 by Paul Barrière, the President of the French Rugby League. In 1952, Rugby Football League secretary Bill Fallowfield persuaded the Rugby League Council to support the concept.[6] At a meeting in Blackpool, England in 1953, the International Board accepted Paul Barrière’s proposal that France should be the nation to host[6] the first tournament to be officially known as the "Rugby World Cup".[7] In addition to the hosts, the tournament featured teams from Britain, Australia and New Zealand.[8] The 1954 Rugby League World Cup was won by Great Britain who defeated France in Paris on 13 November to claim the title.

File:Dave Valentine.jpg
Captain of the winning British team, Dave Valentine, presented with the trophy at the inaugural World Cup in 1954

The World Cup was initially contested by the four Test nations: Australia, Great Britain, France and New Zealand. The teams played each other in a league format. After a final was played between the top two teams in 1954, it was decided that the team that finished first in the league standings would be declared the winner for the second World Cup in Australia in 1957. Australia proved victorious on their home ground.

After the successful 1960 competition, in which Great Britain won the title for the second time, there would be no further World Cup for eight years. The competition had been scheduled to be held in France in 1965, this time with the inclusion of the South African team.[9] However, after an unsuccessful tour of Australia, the French withdrew. The tournament was next held in 1968, and followed a two-year cycle until the mid-1970s. The 1972 World Cup final ended in a 10-all draw, and the title was awarded to Great Britain by virtue of their superior record in the qualifiers.

In 1975, the competition underwent a radical overhaul. It was decided to play matches on a home and away basis around the world instead of in any one host nation and the Great Britain team was split into England and Wales. Australia won that tournament and in 1977 it was decided that Great Britain should once more compete as a single entity. Although the final between Australia and Great Britain was a closely fought affair, public interest in the tournament waned due to the continuing tinkering with the format and it was not held again until the mid-1980s.

From 1985 to 1988, each nation played each other a number of times on a home and away basis. At the end of that period, Australia met New Zealand at Eden Park. The match was a physical encounter, and Australian captain Wally Lewis played part of the match with a broken arm. The Kangaroos won the competition 25-12. This format was repeated from 1989–1992 and Australia won again, defeating Great Britain 10-6 at Wembley Stadium in front of 73,361 people. This crowd remained a Rugby League World Cup record (and a record for any rugby league international match) until beaten by the 74,468 crowd which attended the 2013 World Cup Final at Old Trafford.[10]

In 1995, the competition was once again restructured, returning to the traditional 'host' format with ten teams entering. New teams competing included Fiji, Tonga, Samoa and South Africa. Due to the Super League war, players aligned with the rebel competition were not selected by the ARL to represent the Kangaroos. This meant the absence of many star players from the Australian team's line-up. The tournament, which was also held to celebrate the centenary of the sport in England, was highly successful with over 250,000 people attending the group stages and over 66,000 people attending the final to see Australia defeat England 16-8.

The 2000 World Cup expanded the field further, with sixteen teams entering. However numerous issues including poor organization and blown-out scorelines meant that this tournament was seen as highly unsuccessful, and the competition was put on indefinite hiatus. In the same year, the first Women's Rugby League World Cup was held.

The World Cup returned in 2008 with a 10-team format. Australia hosted the tournament and New Zealand were crowned champions for the first time.

The 2013 tournament, hosted by England and Wales, expanded to 14 teams and was considered the most successful competition to date in terms of attendances, exposure and financial output. Following this tournament, the World Cup is scheduled to take place every four years, with the next competition in 2017. 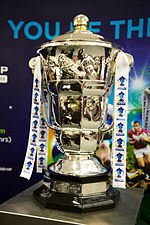 The Paul Barrière Trophy first awarded in the 1954 inaugural contest.

The World Cup trophy was commissioned by French Fédération Française de Rugby à XIII president Paul Barrière at a cost of eight million francs, and then donated to the International Rugby League Board to be used for the inaugural competition in 1954.[12] This trophy was used and presented to the winning nation for the first four tournaments, before being stolen in 1970. After its recovery, the trophy was reinstated for the 2000 tournament.

The Rugby League World Cup has followed a varied range of formats throughout its history as the number of teams participating has increased.

After the group stage the qualifying teams progress to the knockout stages into the quarter finals. The eight teams in the quarter finals play each other with the four winners progressing to the semi finals before the World Cup Final. If the teams are draw after 80 minutes extra time will be played and if the two teams are still level after extra time golden point will be played.

In 2017 the final tournament will follow the same format as the 2013 event.

A final has decided the champions of every World Cup tournament apart from three, in 1957 and 1960 when the tournaments were decided by league leaders. This also happened in 1975 with no actual final held, but even though the Australian's had already won the World Cup, as they had not actually played England in the tournament a special "Final Challenge Match" was held which Australia easily won. Australia have won the most final games with nine wins (a tenth came as 1957 league leaders) and appeared in every single one but the first in 1954 which was contested by Great Britain and France. Great Britain have been runners-up more times than any other team with four final losses while England and France are the teams with the most losses without winning the tournament with two losses each. New Zealand have appeared in four finals and won once in 2008.

The highest attendance in a final was in 2013, when 74,468 people watched Australia defeat New Zealand at Old Trafford in Manchester, England, this becoming the highest attended match in the Rugby League World Cup ever. The lowest attended final was in 1972, when just 4,231 people watched Great Britain and Australia draw 10-all after extra time at the Stade de Gerland in Lyon, France with Great Britain awarded the cup after having finished at the top of the table after the preliminary round (the final was in fact the lowest attendance of the 1972 tournament as the French public seemed disinterested in any game not involving France). The highest attended final in the southern hemisphere was in 1968, when 54,290 people attended the game between Australia and France, with Australia coming out on top; this game took place at the Sydney Cricket Ground. Only 4 out of 12 finals have taken place in the southern hemisphere with a 5th due to take place in 2017.

Up to and including the 2013 tournament only Australia, New Zealand and Great Britain have been crowned World Champions with Australia easily the most successful, winning ten of the fourteen tournaments. Great Britain have won three times, and New Zealand once. New Zealand have also finished runners-up in three World Cups, while France have been runners-up on two occasions, including the inaugural cup where they were captained by Puig Aubert. England have also finished runners-up on two occasions while the Great Britain team were runners-up four times. Fiji have reached the semi-finals on two occasions, while Wales also made the semi-final in 2000. Ireland and Samoa have twice made it past the qualifying pool stages. Other nations to have proceeded to the knock-out stages are Papua New Guinea, Scotland and the United States.

Australia, France and New Zealand are the only nations who have appeared at every Rugby League World Cup from 1954 to 2013. England has also been at all, but participated under the banner of Great Britain in the majority of the earlier tournaments. Wales, including as Great Britain, has competed in all but the 2008 tournament.

In total, 19 different teams have taken part in the world cup. While 18 of these teams represented nations, 1 did not; in 2000, the Aotearoa Māori team was granted entry to the competition. This team is made up of New Zealand Māori players and was knocked out of the world cup in the pool stage. Along with this team, 4 others have appeared in only 1 World Cup; United States, Italy, Russia and Lebanon although United States and Lebanon are set to take part in the 2017 World Cup. It is yet to be determined whether the other 2 teams will qualify as the relevant qualifying tournaments are yet to take place.

Seven teams have officially hosted and co-hosted the World Cup.[citation needed] Only 1975, 1985-88 and 1989-92 were held internationally and not in a specific country. Scotland hosted games in the 2000 world cup but these games were considered to have been hosted by Great Britain rather than the specific home nations. Although games were played in Papua New Guinea during the 1985-88 and 1989-92 World Cups, they are due to officially become the eighth nation to host games in 2017 alongside Australia and New Zealand.[citation needed]

In total, 81 stadiums have hosted world cup games over the 14 different tournaments. Headingley Stadium in Leeds has hosted the tournament the most times, having had games in 7 different world cups with Central Park, Wigan and Lang Park, Brisbane having hosted 6 tournaments. 52 stadiums have hosted matches in just 1 tournament. The most stadiums used in a single tournament was in 2000 when an incredible 26 different stadiums were used; the overall stadium capacity was the highest ever at 704,400 however the occupancy was also the lowest ever at just 37.46%.

The largest stadium in terms of capacity ever used was Wembley Stadium, London with a seating capacity of 90,000; the stadium was used in the 2013 tournament as the venue for the semi-final double-header. The smallest stadium ever used was also in 2013 when The Gnoll, Neath, with a capacity of just 5,000 hosted a game between Wales and Cook Islands. Despite this, it was not the lowest attended game; this was in the 2000 world cup when just 1,497 attended the game between Wales and Lebanon at Stradey Park, Llanelli.

The city with the most different stadiums used is Sydney with 4 stadiums. Hull and Auckland are the cities with the next highest number with 3 stadiums each.