The tournament is administered by World Rugby, the sport's international governing body. Sixteen teams were invited to participate in the inaugural tournament in 1987, however since 1999 twenty teams have taken part. Japan will host the next event in 2019.

Qualifying tournaments were introduced for the second tournament, where eight of the sixteen places were contested in a twenty-four-nation tournament.[1] The inaugural World Cup in 1987, did not involve any qualifying process; instead, the 16 places were automatically filled by seven eligible International Rugby Football Board (IRFB, now World Rugby) member nations, and the rest by invitation.[2]

The current format allows for twelve of the twenty available positions to be filled by automatic qualification, as the teams who finish third or better in the group (pool) stages of the previous tournament enter its successor (where they will be seeded).[3][4] The qualification system for the remaining eight places is region-based, with Europe and the Americas allocated two qualifying places each, Africa, Asia and Oceania one place each, with the last place determined by a play-off.[5]

The previous format, used in 2003 and 2007, allowed for eight of the twenty available positions to be filled by automatic qualification, as the eight quarter finalists of the previous tournament enter its successor. The remaining twelve positions were filled by continental qualifying tournaments.[6] Positions were filled by three teams from the Americas, one from Asia, one from Africa, three from Europe and two from Oceania.[6] Another two places were allocated for repechage. The first repechage place was determined by a match between the runners-up from the Africa and Europe qualifying tournaments, with that winner then playing the Americas runner-up to determine the place.[7] The second repechage position was determined between the runners-up from the Asia and Oceania qualifiers.[7]

The 2015 tournament involved twenty nations competing over six weeks.[4][8] There were two stages, a pool and a knockout. Nations were divided into four pools, A through to D, of five nations each.[8][9] The teams were seeded before the start of the tournament, with the seedings taken from the World Rankings in December 2012. The four highest-ranked teams were drawn into pools A to D. The next four highest-ranked teams were then drawn into pools A to D, followed by the next four. The remaining positions in each pool were filled by the qualifiers.[4][10]

Nations play four pool games, playing their respective pool members once each.[9] A bonus points system is used during pool play. If two or more teams are level on points, a system of criteria is used to determine the higher ranked; the sixth and final criterion decides the higher rank through the official World Rankings.[9]

The winner and runner-up of each pool enter the knockout stage. The knockout stage consists of quarter- and semi-finals, and then the final. The winner of each pool is placed against a runner-up of a different pool in a quarter-final. The winner of each quarter-final goes on to the semi-finals, and the respective winners proceed to the final. Losers of the semi-finals contest for third place, called the 'Bronze Final'. If a match in the knockout stages ends in a draw, the winner is determined through extra time. If that fails, the match goes into sudden death and the next team to score any points is the winner. As a last resort, a kicking competition is used.[9] 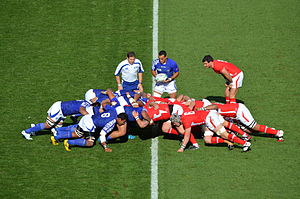 Prior to the Rugby World Cup, there was no truly global rugby union competition, but there were a number of other tournaments. One of the oldest is the annual Six Nations Championship, which started in 1883 as the Home Nations Championship, a tournament between England, Ireland, Scotland and Wales. It expanded to the Five Nations in 1910, when France joined the tournament. France did not participate from 1931 to 1939, during which period it reverted to a Home Nations championship. In 2000, Italy joined the competition, which became the Six Nations.[11]

Rugby union was also played at the Summer Olympic Games, first appearing at the 1900 Paris games and subsequently at London in 1908, Antwerp in 1920, and Paris again in 1924. France won the first gold medal, then Australasia, with the last two being won by the United States. However rugby union ceased to be on Olympic program after 1924.[12][13][lower-alpha 1]

The idea of a Rugby World Cup had been suggested on numerous occasions going back to the 1950s, but met with opposition from most unions in the IRFB.[14] The idea resurfaced several times in the early 1980s, with the Australian Rugby Union (ARU) in 1983, and the New Zealand Rugby Union (NZRU) in 1984 independently proposing the establishment of a world cup.[15] A proposal was again put to the IRFB in 1985 and this time successfully passed 10–6. The delegates from Australia, France, New Zealand and South Africa all voted for the proposal, and the delegates from Ireland and Scotland against; the English and Welsh delegates were split, with one from each country for and one against.[14][15]

The inaugural tournament, jointly hosted by Australia and New Zealand, was held in May and June 1987, with sixteen nations taking part.[16] New Zealand became the first ever champions, defeating France 29–9 in the final.[17] The subsequent 1991 tournament was hosted by England, with matches played throughout Britain, Ireland and France. This tournament saw the introduction of a qualifying tournament; eight places were allocated to the quarter-finalists from 1987, and the remaining eight decided by a thirty-five nation qualifying tournament.[1] Australia won the second tournament, defeating England 12–6 in the final.[18]

In 1992, eight years after their last official series,[lower-alpha 2] South Africa hosted New Zealand in a one-off test match. The resumption of international rugby in South Africa came after the dismantling of the apartheid system, and was only done with permission of the African National Congress.[19][20] With their return to test rugby, South Africa were selected to host the 1995 Rugby World Cup.[21] After upsetting Australia in the opening match, South Africa continued to advance through the tournament until they met New Zealand in the final.[22][23] After a tense final that went into extra time, South Africa emerged 15–12 winners,[24] with then President Nelson Mandela, wearing a Springbok jersey,[23] presenting the trophy to South Africa's captain, Francois Pienaar.[25]

The tournament in 1999 was hosted by Wales with matches also being held throughout the rest of the United Kingdom, Ireland and France. The tournament included a repechage system, alongside specific regional qualifying places, and an increase from sixteen to twenty participating nations. Australia claimed their second title, defeating France in the final.

The 2003 event was hosted by Australia, although it was originally intended to be held jointly with New Zealand. England emerged as champions defeating Australia in extra time. England's win was unique in that it broke the southern hemisphere's dominance in the event. Such was the celebration of England's victory, that an estimated 750,000 people gathered in central London to greet the team, making the day the largest sporting celebration of its kind ever in the United Kingdom.[26]

The 2007 competition was hosted by France, with matches also being held in Wales and Scotland. South Africa claimed their second title by defeating defending champions England 15–6. The 2011 tournament was awarded to New Zealand in November 2005, ahead of bids from Japan and South Africa. The All Blacks reclaimed their place atop the rugby world with a narrow 8–7 win over France in the 2011 final.

In the 2015 edition of tournament, hosted by England, New Zealand once again won the final, this time against established rivals, Australia. In doing so, they became the first team in World Cup history to win three titles, as well as the first to successfully defend a title. It was also New Zealand's first title victory on foreign soil.

The Webb Ellis Cup is the prize presented to winners of the Rugby World Cup, named after William Webb Ellis. The trophy is also referred to simply as the Rugby World Cup. The trophy was chosen in 1987 as an appropriate cup for use in the competition, and was created in 1906 by Garrard's Crown Jewellers.[27][28] The trophy is restored after each game by fellow Royal Warrant holder Thomas Lyte.[29][30] The words 'The International Rugby Football Board' and 'The Webb Ellis Cup' are engraved on the face of the cup. It stands thirty-eight centimetres high and is silver gilded in gold, and supported by two cast scroll handles, one with the head of a satyr, and the other a head of a nymph.[31] In Australia the trophy is colloquially known as "Bill" — a reference to William Webb Ellis.

Tournaments are organised by Rugby World Cup Ltd (RWCL), which is itself owned by World Rugby. The selection of host is decided by a vote of World Rugby Council members.[32][33] The voting procedure is managed by a team of independent auditors, and the voting kept secret. The allocation of a tournament to a host nation is now made five or six years prior to the commencement of the event, for example New Zealand were awarded the 2011 event in late 2005.

The tournament has been hosted by multiple nations. For example, the 1987 tournament was co-hosted by Australia and New Zealand. World Rugby requires that the hosts must have a venue with a capacity of at least 60,000 spectators for the final.[34] Host nations sometimes construct or upgrade stadia in preparation for the World Cup, such as Millennium Stadium – purpose built for the 1999 tournament – and Eden Park, upgraded for 2011.[34][35] The first country outside of the traditional rugby nations of SANZAR or the Six Nations to be awarded the hosting rights was Japan, who will host the 2019 tournament.

Organizers of the 2015 tournament in England claim that the Rugby World Cup is the third largest sporting event in the World, behind only the FIFA World Cup and the Olympics.[36]Although significant evidence suggests that is untrue.[37]

However, independent reviews have called into question the methodology of those growth estimates, pointing to factual inconsistencies.[42] The event's supposed drawing power outside of a handful of rugby strongholds was also downplayed significantly, with an estimated 97 percent of the 33 million average audience produced by the 2007 final coming from Australasia, South Africa, the British Isles and France.[43] Other sports have been accused of exaggerating their television reach over the years; such claims are not exclusive to the Rugby World Cup.

While the event's global popularity remains a matter of dispute, high interest in traditional rugby nations is well documented. The 2003 final, between Australia and England, became the most watched rugby union match in the history of Australian television.[44]

Thus far the only nations to host and win a tournament are New Zealand (1987 and 2011) and South Africa (1995). The performance of other host nations includes England (1991 final hosts) and Australia (2003 hosts) finishing runners-up. France (2007 hosts) finished fourth, while Wales (1999 hosts) failed to reach the semi-finals. England became the first host nation to be eliminated at the pool stages in 2015. Of the twenty-five nations that have ever participated in at least one tournament, twelve of them have never missed a tournament.[lower-alpha 3] 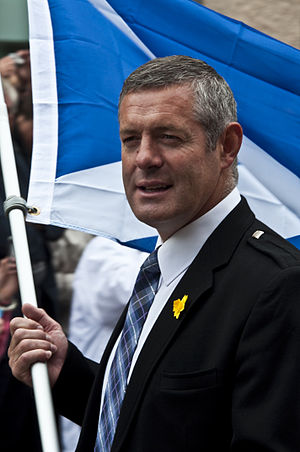 All Black Jonah Lomu is the youngest player to appear in a final – aged 20 years and 43 days at the 1995 Final,.[50] Lomu shares 2 records with South African Bryan Habana. Most tries in a tournament (8): Lomu in 1999 and Habana in 2007 and total world cup tournament tries, both scored 15.[49] The record for most penalties in a match is 8, held by Matt Burke, Gonzalo Quesada, Gavin Hastings and Thierry Lacroix,[48] and the record for most penalties in a tournament, 31, is held by Gonzalo Quesada. South Africa's Jannie de Beer kicked five drop-goals against England in 1999 – an individual record for a single World Cup match.[50]

A total of 16 players have been sent off (red carded) in the tournament. Welsh lock Huw Richards was the first, while playing against New Zealand in 1987. No player has been red carded more than once.[48]