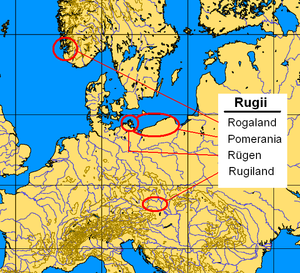 The Rugii, also Rugians, Rygir, Ulmerugi, or Holmrygir (Norwegian: Rugiere, German: Rugier) were an East Germanic tribe who also appeared in southwest Norway and who in 100 AD lived near the Vistula River south of the Baltic Sea in an area 900 years later known as Pomerania. A number of them went from the Baltic Sea to the Danube River valley, where they established their own kingdom in the 5th century AD.

The tribal name "Rugii" or "Rygir" is a derivate of the Old Norse term for rye, rugr, and is thus translated "rye eaters" or "rye farmers".[1] Holmrygir and Ulmerugi are both translated as "island Rugii".[1]

The Rugini were only mentioned once, in a list of tribes still to be Christianised drawn up by the English monk Bede (Beda venerabilis) in his Historia ecclesiastica of the early 8th century.[1][3] Whether the Rugini were remnants of the Rugii is speculative.[1] The Rugini were also associated with the Rani.[3][4]

The Rugii had possibly migrated from southwest Norway to area now called Pomerania in the 1st century AD.[5] Rogaland or Rygjafylke is a region (fylke) in south west Norway. Rogaland translates "Land of the Rygir" (Rugii), the transition of rygir to roga is sufficiently explained with the general linguistic transitions of the Norse language.[1] Scholars suggest a migration either of Rogaland Rugii to the southern Baltic coast, the other way around, or an original homeland on the islands of Denmark in between these two regions.[1] None of these theories is so far backed by archaeological evidence.[1] Another theory suggests that the name of one of the two groups was adapted by the other one later without any significant migration taking place.[1] Scholars regard it as very unlikely that the name was invented twice.[1]

The Roman empire under Hadrian (ruled 117-38): the Rugii inhabit a region corresponding to modern Pomerania (northern Germany and Poland)

The Rugii were first mentioned by Tacitus[6] in the late 1st century.[1][7][2] Tacitus' description of their contemporary settlement area, adjacent to the Goths at the "ocean", is generally seen as the southern coast of the Baltic Sea, the later Pomerania.[1][7][2] Tacitus characterized the Rugii as well as the neighboring Goths and Lemovii saying they carried round shields and short swords, and obeyed their regular authority.[1][7][2] Ptolemaeus[8] in 150 AD mentions a place named Rhougion (also transliterated from Greek as Rougion, Rugion, Latinized Rugium or Rugia) and a tribe named Routikleioi in the same area, both names have been associated with the Rugii.[1][2] Jordanes[9] says the Goths upon their arrival in this area expelled the Ulmerugi.[1][2] and makes other, retrospect references to the Rugii in his Getica[10] of the 6th century.[1] The 9th-century Old English Widsith, a compilation of earlier oral traditions, mentions the tribe of the Holmrycum without localizing it.[1] Holmrygir are mentioned in an Old Norse Skaldic poem, Hákonarmál,[11] and probably also in the Haraldskvæði.[1]

Around the mid 2nd century AD, there was a significant migration by Germanic tribes of Scandinavian origin (Rugii, Goths, Gepidae, Vandals, Burgundians, and others)[12] towards the south-east, creating turmoil along the entire Roman frontier.[13][12][14][15] These migrations culminated in the Marcomannic Wars, which resulted in widespread destruction and the first invasion of Italy in the Roman Empire period.[15] Many Rugii had left the Baltic coast during the migration period. It is assumed that Burgundians, Goths and Gepids with parts of the Rugians left Pomerania during the late Roman Age, and that during the migration period, remnants of Rugians, Vistula Veneti, Vidivarii and other, Germanic tribes remained and formed units that were later Slavicized.[16] The Vidivarii themselves are described by Jordanes in his Getica as a melting pot of tribes who in the mid-6th century lived at the lower Vistula.[17][18] Though differing from the earlier Willenberg culture, some traditions were continued.[18] One hypothesis, based on the sudden appearance of large amounts of Roman solidi and migrations of other groups after the breakdown of the Hun empire in 453, suggest a partial re-migration of earlier emigrants to their former northern homelands.[18]

In Pannonia, Rugiland and Italy

In the beginning of the 4th century, large parts of the Rugii moved southwards and settled at the upper Tisza in ancient Pannonia, in what is now modern Hungary. They were later attacked by the Huns but took part in Attila's campaigns in 451, but at his death they rebelled and created under Flaccitheus a kingdom of their own in Rugiland, a region presently part of lower Austria (ancient Noricum), north of the Danube.[21] After Flaccitheus's death, the Rugii of Rugiland were led by king Feletheus, also called Feva, and his wife Gisa.[21] Yet other Rugii had already become foederati of Odoacer, who was to become the first Germanic king of Italy.[21] By 482 the Rugii had converted to Arianism.[5] Feletheus' Rugii were utterly defeated by Odoacar in 487; many came into captivity and were carried to Italy, and subsequently, Rugiland was settled by the Lombards.[21] Records of this era are made by Procopius,[22] Jordanes and others.[1]

Two years later, Rugii joined the Ostrogothic[23] king Theodoric the Great when he invaded Italy in 489. Within the Ostrogothic Kingdom in Italy, they kept their own administrators[23] and avoided intermarriage with the Goths.[5] They disappeared after Totila's defeat in the Gothic War (535-554).[5]