From Infogalactic: the planetary knowledge core
(Redirected from Ruhr valley)
Jump to: navigation, search
Not to be confused with the river Rur in western North Rhine-Westphalia, Belgium, and the Netherlands.

The Ruhr is a medium-size river in western Germany (North Rhine-Westphalia), a right tributary (east-side) of the Rhine. 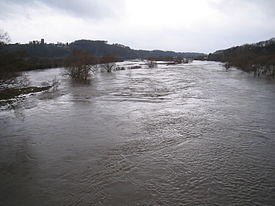 The Ruhr valley near Bochum during a flood

The source of the Ruhr is near the town of Winterberg in the mountainous Sauerland region, at an elevation of approximately 2,200 feet (670 m). It flows into the lower Rhine river at an elevation of only 56 feet (17 m) in the municipal area of Duisburg. Its total length is 218 km (135 mi), its average discharge is 79 m³/s (cubic metres per second) at Mülheim near its mouth. Thus, its discharge is, for example, comparable to that of the Ems river in Northern Germany or the Thames river in the United Kingdom.

The Ruhr Area was Germany's primary industrial area during the early- to mid-20th century. Most factories were located there. The Occupation of the Ruhr from 1923-24 by French forces, due to the Weimar Republic's failure to contionue paying reparations from World War I provoked passive resistance, which saw production in the factories grind to a halt. As a result, the German hyperinflation crisis grew even worse.

During World War II, two of the dams on the Ruhr, the Möhne Dam and the Sorpe Dam were targets for Operation Chastise, in which special "bouncing bombs" were developed to take out the dams and flood the valley, with the hope of seriously affecting the German industries there. The story was told in a 1951 book and the popular 1955 film made from it, The Dam Busters. 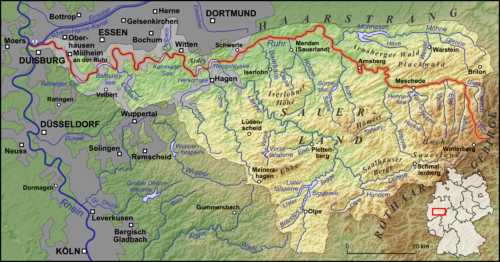 The drainage basin of the Ruhr

There are five Ruhr reservoirs on the river, often used for leisure activities.