A rule of thumb is a principle with broad application that is not intended to be strictly accurate or reliable for every situation. It is an easily learned and easily applied procedure for approximately calculating or recalling some value, or for making some determination. Compare this to heuristic, a similar concept used in mathematical discourse, psychology, and computer science, particularly in algorithm design.

The exact origin of the phrase is uncertain. The earliest known citation comes from J. Durham’s Heaven upon Earth, 1685, ii. 217: "Many profest Christians are like to foolish builders, who build by guess, and by rule of thumb."[1] The phrase also exists in other languages, for example Italian "Regola del pollice", Swedish tumregel, Norwegian and Danish tommelfingerregel, sometimes in the variant "rule of fist", for example Finnish nyrkkisääntö, Estonian rusikareegel, German Faustregel and Pi mal Daumen, Hungarian ökölszabály or Dutch vuistregel, as well as in Turkish parmak hesabı, and in Hebrew "כלל אצבע" (rule of finger) and in Persian "قاعده سرانگشتی," which is translated as finger tip's rule. This suggests that it has some antiquity, and does not originate in specifically Germanic language culture.[citation needed]

The term is thought to originate with carpenters who used the length of the tip of their thumbs (i.e., inches) rather than rulers for measuring things, cementing its modern use as an imprecise yet reliable and convenient standard.[2] This sense of thumb as a unit of measure also appears in Dutch, in which the word for thumb, duim, also means inch.[3] The use of a single word or cognate for "inch" and "thumb" is common in many Indo-European languages, for example, French: pouce inch/thumb; Italian: pollice inch/thumb; Spanish: pulgada inch, pulgar thumb; Portuguese: polegada inch, polegar thumb; Swedish: tum inch, tumme thumb; Sanskrit: angulam inch, anguli finger; Slovak: palec, Slovene: palec inch/thumb, Czech: palec inch/thumb. Also in some other languages such as Thai: nîw inch/finger, Hungarian: hüvelyk inch/thumb.

Another possible origin of the phrase comes from measurement, in particular in agricultural fields. The plants need a fairly precise depth to seed properly, whether planted from seed or being replanted, but the depth can sometimes be estimated using the thumb. That is, a "rule (measurement) of thumb". According to Gary Martin, "The origin of the phrase remains unknown. It is likely that it refers to one of the numerous ways that thumbs have been used to estimate things—judging the alignment or distance of an object by holding the thumb in one's eye-line, the temperature of brews of beer, measurement of an inch from the joint to the nail to the tip, or across the thumb, etc. The phrase joins the whole nine yards as one that probably derives from some form of measurement but which is unlikely ever to be definitively pinned down."[4] 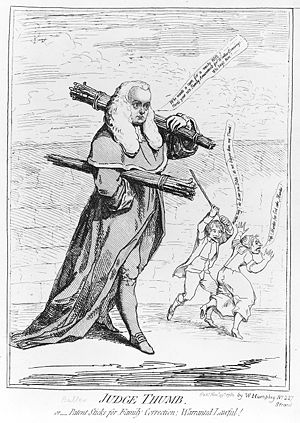 It is often claimed that the term's etymological origin lies in a law that limited the maximum thickness of a stick with which it was permissible for a man to beat his wife.[5][6][2] English common law before the reign of Charles II permitted a man to give his wife "moderate correction", but no "rule of thumb" (whether called by this name or not) has ever been the law in England.[7][8] Such "moderate correction" specifically excluded beatings, allowing the husband only to confine a wife to the household.[9]

Nonetheless, belief in the existence of a "rule of thumb" law to excuse spousal abuse can be traced as far back as 1782, the year that James Gillray published his satirical cartoon Judge Thumb. The cartoon lambastes Sir Francis Buller, an English judge, for allegedly ruling that a man may legally beat his wife, provided that he used a stick no thicker than his thumb, although there is no other written record of Buller making such a pronouncement.[10] The Massachusetts Body of Liberties adopted in 1641 by the Massachusetts Bay colonists states, “Every married woman shall be free from bodily correction or stripes by her husband, unless it be in his own defense from her assault.”[11] In the United States, legal decisions in Mississippi (1824) and North Carolina (1868 and 1874) make reference to—and reject—an unnamed "old doctrine" or "ancient law" by which a man was allowed to beat his wife with a stick no wider than his thumb.[6] For example, the 1874 case State v. Oliver (North Carolina Reports, Vol. 70, Sec. 60, p. 44) states: "We assume that the old doctrine that a husband had the right to whip his wife, provided that he used a switch no larger than his thumb, is not the law in North Carolina." In 1976, feminist Del Martin used the phrase "rule of thumb" as a metaphorical reference to describe such a doctrine. She was misinterpreted by many as claiming the doctrine as a direct origin of the phrase and the connection gained currency in 1982, when the U.S. Commission on Civil Rights issued a report on wife abuse, titled "Under the Rule of Thumb".[8][12]