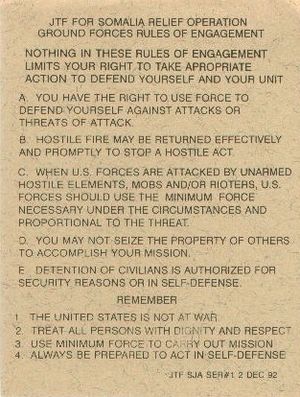 Rules of Engagement (ROE) are rules or directives to military forces (including individuals) that define the circumstances, conditions, degree, and manner in which the use of force, or actions which might be construed as provocative, may be applied.[1] They provide authorization for and/or limits on, among other things, the use of force and the employment of certain specific capabilities. In some nations, ROE have the status of guidance to military forces, while in other nations, ROE are lawful commands. Rules of Engagement do not normally dictate how a result is to be achieved but will indicate what measures may be unacceptable.[2]

While ROE are used in both domestic and international operations by most militaries, ROE are not used for domestic operations in the United States. Instead, the use of force by the U.S. military in such situations is governed by Rules for the Use of Force (RUF).

An abbreviated description of the Rules of Engagement may be issued to all personnel. Commonly referred to as an "ROE Card", this document provides the soldier with a summary of the ROE regulating the use of force for a particular mission.[3] The term is also the reason for the title of the US CBS sitcom which aired its last episode 20 May 2013 [4]

While many countries have their own rules of engagement documents, many others do not. There are two primary international rules of engagement manuals that are internationally available; NATO ROE Manual MC 362-1(restricted to NATO and PfP countries), and the San Remo Rules of Engagement Handbook which is freely available to all on the International Institute of Humanitarian Law (IIHL) web-site. Created for the IIHL by Commander Alan Cole, Major Phillip Drew, Captain Rob McLaughlin and Professor Dennis Mandsager, the San Remo ROE Handbook has been translated from its English original into French, Chinese, Arabic, Spanish, Hungarian, Russian, Bosnian, and Thai and several other languages.[5] Several countries have used the San Remo handbook as a model for creating their own ROE systems.[citation needed]

The International Institute of Humanitarian Law in San Remo, Italy conducts a Rules of Engagement training course at least once per year, usually in September. Taught by some of the world's foremost authorities on ROE, the course attracts students from around the globe. Similar training by the San Remo ROE drafting team is conducted for the United Nations, staff colleges and other organizations as requested.

Often violations of the laws of war are confused with violations of Rules of Engagement. Rules of Engagement delineate the amount of force or other provocative actions that a military force may employ during an operation. Breaches of the Geneva Conventions and other laws of war fall outside of ROE. While some courts have found that an error in judgement in determining a hostile act or hostile intent is a breach of ROE, that conclusion constitutes an error at law on the part of the court. The question that must be asked in such cases is "Did the Soldier have authority to use deadly force during this mission?" If the answer is yes, and the issue is self-defense, then attention must be turned to whether or not that force was reasonable and necessary in the circumstances. Likewise, in situations of murder of prisoners of war/detainees, in most cases, combatants who are taking them will have the right to use deadly force. However, when a prisoner of war/detainee is held under captivity, that person is afforded special protection under international humanitarian law. If the detained person is abused or murdered, the violation is one of the international criminal law, not ROE.