From Infogalactic: the planetary knowledge core
Jump to: navigation, search
This article is about the entire historical region. For the Ottoman province of Rumelia, see Rumelia Eyalet.
File:Rumelia map.jpg
Map of Rumelia in 1801

Rumelia (Turkish: Rumeli; Bosnian: Rumelija, Greek: Ρωμυλία, Romylía, or Ρούμελη, Roúmeli; Albanian: Rumelia; Macedonian and Serbian: Румелија, Rumelija and Bulgarian: Румелия, Rumeliya) was a historical term describing the area now referred to as the Balkans or the Balkan Peninsula when it was administered by the Ottoman Empire.

The term Rûm means "Roman", while Rumelia (Turkish: Rumeli) means "Land of the Romans" in Turkish, referring to the lands conquered by the Ottoman Turks from the Byzantine Empire, at the time still known as the Roman Empire; the neologism "Byzantine Empire" was coined only in 1557 by a German historian, Hieronymus Wolf, in his work Corpus Historiæ Byzantinæ.[1] As such, it was long used in Greek, Turkish, Albanian and the Slavic languages to describe the lands of that empire.

Originally, the Seljuk Turks used the name "Land of the Rûm" (Romans) for defining Anatolia, which was gradually conquered by the armies of the Seljuk Empire from the Byzantine Empire following the Battle of Manzikert in 1071. The Seljuk Sultanate of Rum (1077–1307) meant the "Sultanate of Anatolia".

However, following the expansion of the Ottoman Empire into Anatolia and the Balkans starting from the second half of the 14th century, and the conquest of Constantinople (Istanbul) in 1453 by Mehmed II, the term Rumeli (Land of the Romans) was applied exclusively to define the Balkan regions of the Ottoman Empire, which remained primarily populated by Christians. In accordance with the religion-based Ottoman Millet system, the Orthodox Christian people of the region often collectively referred to themselves (and were referred to by the Muslim Turks) as the Millet-i Rûm (Nation of Romans), until the rise of nationalism in the Ottoman Empire in the 19th century. 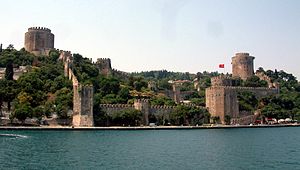 Rumeli Hisarı (Rumelian Fortress, 1452) on the European shore of the Bosphorus strait in Istanbul.

Rumelia included the provinces of Thrace, Macedonia and Moesia, today's Bulgaria and Turkish Thrace, bounded to the north by the rivers Sava and Danube, west by the Adriatic coast, and south by the Morea.[2] The name Rumelia was ultimately applied to a province composed of central Albania and north-western Macedonia, with Bitola for its chief town.

Owing to administrative changes effected between 1870 and 1875, the name ceased to correspond to any political division. Eastern Rumelia was constituted as an autonomous province of the Ottoman Empire by the Treaty of Berlin, 1878,[2] but on September 6, 1885, after a bloodless revolution, it was united with Bulgaria.[3] The Kosovo Vilayet was created in 1877.[4]

Today, in Turkey, the word Trakya (Thrace) has mostly replaced Rumeli (Rumelia) when referring to the part of Turkey which is in Europe (provinces of Edirne, Kırklareli, Tekirdağ, the northern part of Çanakkale Province and the western part of Istanbul Province), though Rumelia remains in use in historical contexts and the word is used in the context of the culture of current Turkish populations of the Balkans and descendants of Turkish immigrants from the Balkans. This region in Turkey is also referred to as Eastern Thrace or Turkish Thrace. In Greece, the term Ρούμελη (Rumeli) has been used since Ottoman times to refer to Central Greece, especially when juxtaposed with the Peloponnese or Morea. The word "Rumeli" is also used in some cases (mostly by Istanbul denizens) to refer exclusively to the part of Istanbul Province that is situated west of the Bosphorus.