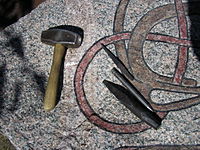 A runestone being made by the modern runemaster Kalle Dahlberg.
This article is about the occupation. For the game, see Runemaster (game).

A runemaster or runecarver is a term for a specialist in making runestones. More than 100 names of runemasters are known from Viking Age Sweden with most of them from 11th century eastern Svealand.[1] Many anonymous runestones have more or less securely been attributed to these runemasters.[1] During the 11th century, when most runestones were raised, there were a few professional runemasters. They and their apprentices were contracted to make runestones and when the work was finished, they sometimes signed the stone with the name of the runemaster.[2]

Most early medieval Scandinavians were probably literate in runes, and most people probably carved messages on pieces of bone and wood.[2] However, it was difficult to make runestones, and in order to master it one also needed to be a stonemason.[2]

Notable runemasters of the 11th to early 12th centuries include: