Rupert Mayer (23 January 1876 – 1 November 1945) was a German Jesuit priest and a leading figure of the Catholic resistance to Nazism in Munich. In 1987 he was beatified by Pope John Paul II.

Mayer was born and grew up in Stuttgart. He had a brother and four sisters. He was a talented violinist and horse rider in his youth. Rupert finished his secondary education in 1894 and studied philosophy and theology in Freiburg, Switzerland; Munich and Tübingen. He was, among other things, a member of A.V. Guestfalia Tübingen and K.D.St.V. Aenania München, two Studentenverbindungen that belong to the Cartellverband der katholischen deutschen Studentenverbindungen. In 1899, he was ordained a priest and joined the Society of Jesus in Feldkirch, Vorarlberg, Austria (then Austria-Hungary) in 1900. From 1906, he moved about Germany, Switzerland and the Netherlands as a People's Commissioner.[citation needed]

From 1914, Mayer was a volunteered chaplain in the First World War. He was initially assigned to a military hospital; however, he wished to be closer to the soldiers and was sent to the fronts in France, Poland and Romania as chaplain to a division of soldiers. He was held in great esteem by both Catholic and non-Catholic soldiers. When there was fighting at the front Fr. Mayer would be found himself crawling along the ground from one soldier to the next talking to them, listening to them and administering the Sacraments to them. When he was warned that he was putting his own life in danger through such activities, he replied simply, My life is in God's hands. In December 1915 Fr. Mayer was the first chaplain to win the Iron Cross for bravery in recognition of his work with the soldiers at the front. In December 1916, he lost his left leg after it was injured in a grenade attack. He returned to Munich to convalesce and was referred to as the Limping Priest.[citation needed]

He worked managing a clerical retreat, as a preacher, and as of 1921 as a leader of the Marian Congregation in Munich. In 1937, he found himself in "protective custody" for six months, and for seven months after that, he was in Sachsenhausen concentration camp. He was released from there on the condition of a broad ban on preaching. Until the liberation by the US forces in May 1945, he lived Ettal Abbey. An American officer returned him to Munich, where he received a hero's welcome. Father Rupert Mayer died on his feet on 1 November 1945 of a stroke, while he was celebrating 8:00 AM Mass, on the feast of All Saints' Day in St. Michael's in Munich. Facing the congregation, he said THE LORD, THE LORD, THE LORD. These were his last words.[citation needed]

Accompanied by thousands of mourners, Fr. Mayer was first buried at the Jesuitenfriedhof in Pullach. Due to the steady stream of pilgrims, his remains were moved to Munich in 1948 and were reburied in the Unterkirche of the Bürgersaalkirche.[citation needed] 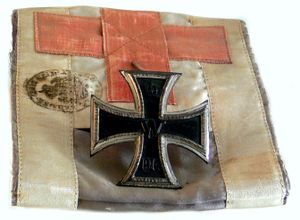 Iron Cross medal of Fr. Rupert Mayer, exhibited in the Bürgersaalkirche of Munich

Protest against the Nazis

In January 1933 when Adolf Hitler became Chancellor of Germany, he showed his true face and began to close church-affiliated schools and started a campaign to defame the religious orders in Germany. Mayer spoke out against this persecution from the pulpit of St. Michael's in downtown Munich and because he was a powerful influence in the city, the Nazis could not tolerate such a force to oppose them. On 16 May 1937, the Gestapo ordered Mayer to stop speaking in public which he obeyed, but he continued to preach in church.

Mayer spoke out against anti-Catholic baiting campaigns and fought against Nazi church policy. He preached that Man must obey God more than men. His protests against the Nazis landed him several times in Landsberg prison (the same jail in which Hitler spent almost 6 months after the Beer Hall Putsch in 1924), and in Sachsenhausen concentration camp under the Kanzelparagraphen, a series of 19th-century laws that forbade the clergy to make political. From late 1940, he was interned in Ettal Monastery, mainly because the Nazis were afraid that he would die in the concentration camp, and thereby become a martyr.

Fr. Rupert Mayer resolutely spoke out against the Nazi régime's evil in his lectures and sermons. Before the Sondergericht – one of Hitler's "special courts" – he declared Despite the speaking ban imposed on me, I shall preach further, even if the state authorities deem my pulpit speeches to be punishable acts and a misuse of the pulpit. His time in prison and the concentration camp had taken its toll, as had the enforced inactivity while under house arrest at Ettal.

Since his death in 1945, Mayer's followers called for his beatification. In 1950, Cardinal Michael von Faulhaber opened the information process in the Archdiocese of Munich and Freising regarding the call to sanctity and virtues. In 1951, Jesuit provincial Otto Faller completed and formally forwarded the beatification information to Rome.

In 1956, Pope Pius XII, who had personally known Fr. Rupert Mayer during his time as nuncio in Munich, awarded him the title Servant of God. Under Pope John XXIII, the beatification process was initiated, the results of which were formally accepted by Pope Paul VI in 1971. Under Pope John Paul II, the decree of 'heroic virtue' was issued in 1983. Mayer was beatified by Pope John Paul II on 3 May 1987 in Munich.

In Bavaria, numerous streets are named after Father Mayer. In 1954, the Cartell Rupert Mayer (CRM) was founded. It was a further development of the first Christliche Loge (CL) founded in Munich in 1946. The mediaeval Dombauhütten Logen may be considered its forerunner. Furthermore, in Pullach, Bavaria, a public school, a Realschule and a Gymnasium bear his name.

Also a school located in Cebu City, Philippines, Sacred Heart School – Ateneo de Cebu, has a section named after him. Another Jesuit school in the Philippines, Xavier University – Ateneo de Cagayan, has a high school section that bears his name. Regis Jesuit High School in Aurora, Colorado dedicated the chapel to him. In 2006 Fordham University dedicated a chapel in his name at their Lincoln Center campus in Manhattan, New York.

The following text come from the song produced by Bukas Palad Music Ministry:

Lord, what You will let it be so
Where You will there we will go
What is Your will help us to know

Lord, when You will the time is right
In You there's joy in strife
For Your will I'll give my life