The Rur river (German; in Dutch and French: Roer river) is a major river which flows through portions of Belgium, Germany and the Netherlands. It is a right (eastern) tributary to the Meuse River. About 90 percent of the river's course is in Germany.

It is not to be confused with the Ruhr and Röhr rivers, tributaries of the Rhine in North Rhine-Westphalia. 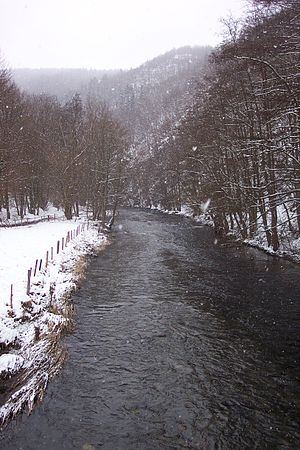 The Rur between Monschau and Dedenborn during winter

The Rur rises in the Hautes Fagnes/Hohes Venn National Park, near the 696-metre (2,283 ft) tall Signal de Botrange in Belgium at an elevation of 660 metres (2,170 ft) above sea level. South of Monschau it flows into Germany, through North Rhine-Westphalia. It flows first through the northern part of the Eifel hills.

Major tributaries of the river Rur include the Inde and the Wurm. Cities along the Rur are Monschau, Heimbach, Nideggen, Düren, Jülich, Linnich, Hückelhoven, Heinsberg (all in Germany) and Roermond (Netherlands).

In the 1960s and 1970s, the northern part of the Rur was heavily polluted by the tailings of many German coal mines. Neither fish nor other organisms could be found, and it was dangerous to swim in the river. Foam flakes regularly flooded parts of the city of Roermond. After the closure of the mines, the waste water treatment in Germany and the Netherlands greatly improved. Only the lower part of the river is still contaminated.[1] The water in the upper part of the river is so clean that trout and more than 30 species of fish are back. After an absence of 125 years, salmon returned to the Rur in 2004. 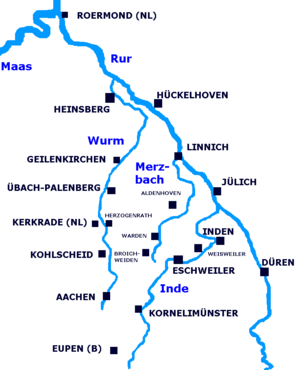 Map of Rur-Roer river
and its tributaries

The Rur represented an important front in the Allied push towards Germany at the end of the Second World War.

Operation Blackcock was the code name for the clearing of the Roer Triangle formed by the towns of Roermond, Sittard and Heinsberg. It was conducted by the 2nd British Army between 14 and 26 January 1945. The objective was to drive the German 15th Army back across the Rivers Rur and Wurm and move the frontline further into Germany. The operation was carried out under command of the XII Corps by three divisions. The operation is relatively unknown despite the sometimes fierce battles that were fought for each and every village and hamlet within the "Roer Triangle".

Between 16 December 1944 and 23 February 1945, the U.S. Ninth Army was unable to advance across the Rur during Operation Queen, because German forces controlled dams close to the river's source in the densely forested region of the Hohes Venn. This meant Axis forces could potentially blow the dams, releasing enough water to wash out an Allied assault. At the same time, the German Ardennes Offensive meant any further westward push would leave Allied forces stretched and supply lines exposed. Eventually the counteroffensive was overwhelmed and German engineers, under pressure of aerial and artillery bombardment, released the dams. As the flood waters began to subside, Allied forces crossed the Rur in rafts in the early hours of February 23, 1945, as part of Operation Grenade.

The Rur is the only real white water river in Northrhine-Westfalia. The upper section above the Rur reservoir (German: Rurtalsperre Schwammenauel) offers 20 kilometres (12 mi) of white water ranging from class III(+) to I.

Paddling on the Middle Rur below the Rur Reservoir is dependent on the release of water from the Rur dam and is subject to registration with the German paddlers club DKV. For environmental protection reasons this section of the river may only be paddled between 15 July and 28 February. Despite these restrictions it is frequently visited by individual paddlers and boat rental companies for its natural beauty.

The town of Monschau is the venue for the yearly International White Water Race which was held on 17 March 2013 for the 58th time.