From Infogalactic: the planetary knowledge core
Jump to: navigation, search
Not to be confused with Rudolph Maté.

Metty's career began around 1925 as an assistant with Standard Film Laboratory, who was then was hired by Paramount Pictures working in the camera department. He left for RKO in 1929.[3] He became a regular cameraman at Universal Studios, and was a regular collaborator with the German film director Douglas Sirk, making eleven films all together with Sirk. 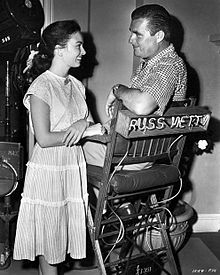 File:Kubrick-Spartacus-camera.jpg
Director Stanley Kubrick looking through camera with cinematographer Russell Metty (in hat) standing behind, on set for Spartacus (1960).