The Russo-Crimean Wars were fought between the forces of Muscovy and the Tatars of the Crimean Khanate in the 16th century for the control of Volga River region.

In the 16th century the Wild Steppes area in Russia was exposed to the Tatar's raids. During the wars, Crimean Tatars (supported by Turkish army) invaded central Russia and devastated Ryazan, burned Moscow and took 150,000 Russians as captives. However, next year were Tatars defeated in the Battle of Molodi. Later, the Tatar raids continued and the Crimean khanate was invaded several times and finally conquered in late 18th. Tatars eventually lost their influence in the region and Muscovy after annexing that territory extended its realm southward closer to the Northern Caucasus and Caspian Sea.

The conflict surfaced soon after the establishment of the Muscovy's buffer state Qasim Khanate and domination of Moscow in the Moscow-Kazan Wars of the late 15th century. 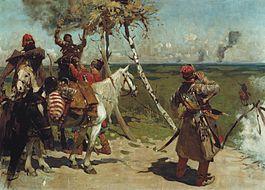 The Crimean Tatars' invasions of Russia (Muscovy) began in 1507, after the death of Moscow's grand duke Ivan III, when the Crimean Khanate attacked the Russian towns of Belev and Kozelsk.

In the 16th century the border of the Wild Steppes was near the city of Ryazan, near the Oka River, a tributary of the Volga, and close to the Yelets river, a tributary of the Don River, near Sosna. The main path to Moscow was the Muravsky Trail, going from the Crimean Isthmus of Perekop up to Tula between the basins of the Dnieper and Severskiy Donets rivers. Penetrating for about 100–200 kilometers into Russian territory, the Tatars would turn back only after extensive looting and kidnapping. Captives were sent to the Crimean city of Caffa to be sold.

Every spring, Moscow mobilized up to 65,000 soldiers for border service. The defensive lines consisted of a circuit of fortresses and cities.

To protect from invasions by the Nogai Horde in the region between the Volga and Irtysh rivers, the Volga cities of Samara (1586), Tsaritsyn (1589), and Saratov (1590) were founded.

The Russian population in the border regions suffered heavily from these invasions. This depopulation, in combination with the inability of Russian settlement in southern regions where the climate was more conducive to agriculture, hindered Muscovy's social and economic development.

In 1570 the Crimean Tatars' horde terribly devastated the Ryazan borderland of Muscovy, only meeting weak resistance.

In May 1571, the 120,000-strong Crimean[1] and Turkish army (80,000 Tatars, 33,000 irregular Turks and 7,000 janissaries) led by the khan of Crimea Devlet I Giray, and Big and Small Nogai hordes and troops of Circassians, bypassed the Serpukhov defensive fortifications on the Oka River, crossed the Ugra River and rounded the flank of the 6,000-man Russian army. The sentry troops of Russians were crushed by the Crimeans. Not having forces to stop the invasion, the Russian army receded to Moscow. The rural Russian population also fled to the capital.

The Crimean army devastated unprotected towns and villages around Moscow, and then set fire to suburbs of the capital.[2] Due to a strong wind, the fire quickly expanded. The townspeople, chased by a fire and refugees, rushed to northern gate of capital. At the gate and in the narrow streets, there was a crush, people "went in three lines went on heads one of another, and top pressed those who were under them".[citation needed] The army, having mixed up with refugees, lost order, and general prince Belsky died in a fire.

Within three hours, Moscow burnt out completely. In one more day, the Crimean army, sated with its pillage, left on the Ryazan road to the steppes. Contemporaries counted up to 80,000 victims of the invasion in 1571,[3] with 150,000 Russian taken as captives.[3] Papal ambassador Possevin testified of the devastation: he counted in 1580 no more than 30,000 inhabitants of Moscow, although in 1520 the Moscow population was about 100,000.[citation needed] See also Fire of Moscow (1571)).

After the burning of Moscow, the Crimean khan, Devlet Giray, supported by the Ottoman Empire, invaded Russia again. In 1572 the Tatars and the Turks again invaded Russia, however, this time they were repelled in the Battle of Molodi. In July–August, the 120,000-strong horde of Devlet I Giray of Crimea was defeated by Russians led by Prince Mikhail Vorotynsky and Prince Dmitriy Khvorostinin.[4]

Later, the Russian expansion turned to the Black Sea region and Crimean khanate was invaded several times in the 18th century and finally conquered during the Russo-Turkish Wars.

This list does not include raids into Poland-Lithuania (75 raids during 1474–1569[5]:17) A longer list can be found in ru:Крымско-ногайские набеги на Русь.

1572: Battle of Molodi, vital battle of the war. Tatars stopped growing to the north. Then started to retreat.

1592: Suburbs of Moscow burned while Russian troops were away fighting Swedes[5]:17

1614: Nogai raids within sight of Moscow. During the Time of Troubles so many captives were taken that the price of a slave at Kaffa dropped to fifteen or twenty gold pieces [5]:66

1769: Winter raid into New Serbia. Prisoners by the thousands[10]

(number following a footnote is the page number)