The Russo-Turkish War (1806–1812) was one of many wars fought between Imperial Russia and the Ottoman Empire.

The war broke out in 1805–1806 against the background of the Napoleonic Wars. In 1806, Sultan Selim III, encouraged by the Russian defeat at Austerlitz and advised by the French Empire, deposed the pro-Russian Constantine Ypsilanti as Hospodar of the Principality of Wallachia and Alexander Mourousis as Hospodar of Moldavia, both Ottoman vassal states. Simultaneously, the French Empire occupied Dalmatia and threatened to penetrate the Danubian principalities at any time. In order to safeguard the Russian border against a possible French attack, a 40,000-strong Russian contingent advanced into Moldavia and Wallachia. The Sultan reacted by blocking the Dardanelles to Russian ships and declared war on Russia.

Initially, Emperor Alexander I was reluctant to concentrate large forces against the Ottoman Empire while his relations with Napoleonic France were still uncertain and the main part of his army was occupied fighting against Napoleon in Prussia. A massive Ottoman offensive aimed at Russian-occupied Bucharest, the Wallachian capital, was promptly checked at Obilesti by as few as 4,500 soldiers commanded by Mikhail Miloradovich (June 2, 1807). In Armenia, the 7,000-strong contingent of Count Gudovich destroyed the Turkish force of 20,000 at Arpachai (June 18). In the meantime, the Russian Imperial Navy under Dmitry Senyavin blockaded the Dardanelles and defeated the Ottoman fleet in the Battle of the Dardanelles, after which Selim III was deposed. The Ottoman fleet was destroyed the following month in the Battle of Athos, thus establishing Russian supremacy on sea.

At this point the war might have ended, if it were not for the Peace of Tilsit. The Russian Emperor, constrained by Napoleon to sign an armistice with the Turks, used the time of peace to transfer more Russian soldiers from Prussia to Bessarabia. After the southern army was augmented to 80,000 and the hostilities were resumed, the 76-year-old commander-in-chief Prozorovsky made little progress in more than a year. In August 1809 he was eventually succeeded by Prince Bagration, who promptly crossed the Danube and overran Dobruja. Bagration proceeded to lay siege to Silistria but, on hearing that the 50,000-strong Turkish army approached the city, deemed it wise to evacuate Dobruja and retreat to Bessarabia.

In 1810, the hostilities were renewed by the brothers Nikolay and Sergei Kamensky, who defeated the Ottoman reinforcement heading for Silistria and ousted the Turks from Hacıoğlu Pazarcık (May 22). The position of Silistria now appeared hopeless, and the garrison surrendered on May, 30. Ten days later, Kamensky laid siege to another strong fortress, Shumla. His storm of the citadel was repelled at great loss of life, and more bloodshed ensued during the storming of Rousse on July, 22. The latter fortress did not fall to the Russians until 9 September, after Kamensky's army had surprised and routed a huge Turkish detachment at Batyn on 26 August. On 26 October, Kamensky again defeated a 40,000-strong army of Osman Pasha at Vidin. Russians lost only 1,500 men, compared with 10,000 for their opponents.

However the young Kamensky caught a serious illness on February 4, 1811 and died soon thereafter, left the army under the command of Louis Alexandre Andrault de Langeron. To this point, although the Russians had won many battles, they had failed to achieve any important victories that would force the Ottomans to end the war. Furthermore, relationship between France and Russia quickly became strained - that means the incoming war is near and inevitable. The Russian Empire found that she needed to end the southern war quickly in order to concentrate on dealing with Napoleon. In such a situation, Tsar Alexander appointed his disfavoured general Mikhail Kutuzov to be the new commander of the Russian force.

Mikhail Kutuzov, in accordance with his cautious character, evacuated Silistria and slowly started to retreat northward. Kutuzov's withdrawal induced the Turks to launch a counter-offensive to recapture all the lost area. In 1811, 60,000 Turkish troops led by Grand Vizier Lal Aziz Ahmet Pasha gathered at Shumla, the strongest Turkish fortress at that time. Kutuzov's troops were only about 46,000 men who were tired after five consecutive years of war. However, the Russian commander had plenty of experience fighting the Turks: he knew that the Turks were only strong at the initial cavalry offensive and then its strength would rapidly decline after this cavalry assault was repelled; so the Russians had a great advantage when fighting in open battle.

That battle took place on 22 June 1811 near Rousse. As expected, the Russian infantry and cannons quickly repelled the Turkish troops and then defeated the Turkish army. This victory gained Kutuzov a portrait of Tsar Alexander I. But after that Kutuzov ordered his forces to cross the Danube to Bessarabia. This odd retreat made the Turks think that they won: a big party was held in Constantinople to celebrate the Turks' "victory". Alexander became very angry and demand an explanation. However, Kutuzov had a secret plan behind that strange act and he decided to keep quiet for a while.

Seeing that the Russians had retreated, the Turks prepared to launch a new attack. Several months later 70,000 Turkish troops led by Lal Aziz Ahmet Pasha crossed the Danube river to assault the Russians. The main force (50,000 personnel) garrisoned the west bank, facing the Russian forces. The remaining 20,000 garrisoned at the east bank, guarding the ammunition and provisions. On the night of 2 November 1811 a separate Russian cavalry detachment secretly crossed the Danube and assaulted the east-bank Turkish troops, slew 9,000 troops and captured the remaining ones with all the Turks' provisions. The Russian casualties were low, about 25 cavalrymen and nine Cossack troops killed in action. Right after that, all the Russian forces attacked and quickly encircled the main Turkish army on the left-bank.

Kutuzov then received information that Lal Aziz Ahmet Pasha was trying to escape the encirclement himself. The Russian commander let Ahmet escape because he knew that, according to Turkish law, the encircled Grand Vizier could not take part in peace negotiations - and peace is what Kutuzov needed. After that, Kutuzov contacted Ahmet to congratulate him on his successful escape and offer peace negotiations. But the Grand Vizier still hoped for reinforcements and tried to procrastinate. In response, the Russians took all the surrounding forts and cut all the supply lines to the encircled Turks.

With all the supply lines being cut off, the encircled Turks were threatened by hunger and disease. Kutuzov proposed supplying the Turks with food and provisions to allow them to survive. Tsar Alexander I did not agree with Kutuzov's idea, but Kutuzov explained that by keeping the Turks alive, he actually was holding a larger number of hostages and that would force the Sultan to negotiate. The plan was successful and on 28 May 1812 the Treaty of Bucharest was signed.

Six years of war on the eastern front left the border unchanged. Fighting here was more serious than during the previous war, but it was still a sideshow. Russia now had crossed the Caucasus and annexed Georgia, the western half of which had been nominally Turkish. It also had taken the Persian vassal khanates along the Caspian coast and east of Georgia. The area around modern Armenia (Yerevan Khanate and Nakhichevan Khanate) was still Persian. Russia was also at war with Persia but the Turks and Persians did not help each other. A large part of the Russian army was tied up watching Napoleon. Russian Viceroys were 1806: Ivan Gudovich, 1809: Alexander Tormasov, 1811:Philip Osipovich Paulucci, 1812: Nicholai Rtishchev. 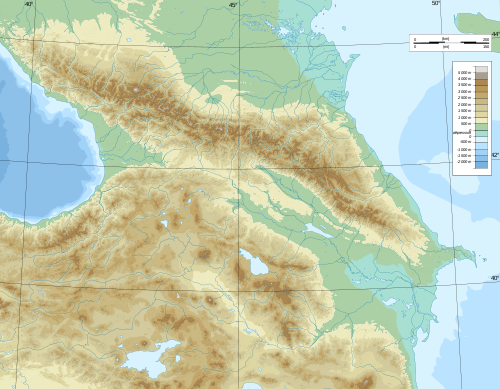 Crimean War map showing many of the same places

[1]Fighting with Turkey began in 1807 with the easy capture of Anapa by Admiral Pustoshkin. Gudovich led his main force toward Akhaltsikhe but lost 900 men while trying to storm Akhalkalaki and withdrew to Georgia. Secondary campaigns against Kars and Poti also failed. The Turks took the offensive, failed three times to take Gyumri and then were completely defeated by Gudovich (Battle of Arpachai). He was congratulated by the Shah, an interesting comment on the relations between the two Muslim empires. Gudovich was replaced by Count Tormasov who arrived about April 1809. In 1810 Poti on the coast was captured. A Turkish invasion was blocked by General Paulucci under the walls Akhalkalaki. In November 1810 a Russian attack on Akhaltsikhe failed due to an outbreak of plague. In 1811 Tormasov was recalled at his own request and replaced by Paulucci in Transcaucasia, Rtishchev taking over the Northern Line. In 1811 more troops were withdrawn to deal with the expected threat of Napoleon. Turks and Persians agreed on a joint attack toward Gyumri. They met at ’Magasberd’ {location?} on 30Aug11. There a Kurd assassinated the Seraskar of Ezerum and this caused the forces to break up, according to Baddeley. Paulucci sent Pyotr Kotlyarevsky against Akhalkalaki. He made a forced march over the snow-covered mountains, avoiding the main roads, attacked at night and had storming parties on the walls before the Turks knew they were there. By the morning of 10 December[2] he held the fort with a loss of only 30 killed and wounded. For this he was promoted to Major-General at the age of 29. On 21 February 1812 5000 Turks failed to re-take Akhalkalaki. Three days later they were defeated at Parghita {location?}. Paulucci was sent to the face Napoleon and Rtishchev became commander of both sides to the mountains. Russia now decided to make peace. By the Treaty of Bucharest (1812), signed in May just before the Napoleonic invasion, Turkey gave up Bassarabia in the west but regained nearly all it had lost in the east: Poti, Anapa and Akhalkalali. Russia retained Sukhum-Kale on the Abkhazian coast.

According to the Treaty, the Ottoman Empire ceded the eastern half of Moldavia (which became known as Bessarabia) to Russia, despite the fact that Moldavia was supposed to be protected. This really made Russia a new power in Danube area with an economically, diplomatically and militarily profitable frontier. In Transcaucasia the frontier remained basically unchanged, the Russians returning several places they had captured.

The treaty was approved by Alexander I of Russia on June 11, just 13 days before Napoleon's invasion of Russia commenced, that allowed many of the Russian soldiers in the Balkans to be brought back to in time for the expected attack of Napoleon.