Ruth Bell Graham (June 10, 1920 – June 14, 2007), wife of the famous evangelist Billy Graham, was born in Qingjiang, Jiangsu, China as Ruth McCue Bell, the second of five children. Her parents, Dr. L. Nelson Bell and Virginia McCue Bell, were medical missionaries at the Presbyterian Hospital 300 miles north of Shanghai. At the age of 13 she was enrolled in high school in Pyongyang, Korea, where she studied for three years. Ruth completed her high school education at Montreat, North Carolina, while her parents were there on furlough. She graduated from Wheaton College (Illinois) in Wheaton, Illinois.

The Grahams met at Wheaton College in Wheaton, Illinois and were married in the summer of 1943, shortly after their graduation. Ruth became a minister's wife for a brief period in Western Springs, Illinois. She lived out the rest of her life in Montreat, North Carolina. The Grahams have five children: Virginia (Gigi), Anne, Ruth, Franklin and Nelson Edman (Ned), nineteen grandchildren, and numerous great grandchildren. Grandson Tullian Tchividjian was senior pastor of Coral Ridge Presbyterian Church in Fort Lauderdale, Florida before resigning in June 2015.

Mrs. Graham wrote “Our Christmas Story,” “Sitting by My Laughing Fire,” “It's My Turn,” “The Legacy of a Pack Rat,” “Prodigals and Those Who Love Them,” “Clouds Are the Dust of His Feet,” “One Wintry Night,” “Coffee and Conversation with Ruth Bell Graham and Gigi Graham Tchividjian,” “Collected Poems,” “Mothers Together,” and “Prayers From A Mother’s Heart.” Mrs. Graham’s most recent books published in 2001 are, “Never Let It End: Poems of a Lifelong Love“ published by Baker Books, “Footprints of a Pilgrim: The Life and Loves of Ruth Bell Graham,” published by Word Publishing and “A Quiet Knowing,” published by W Publishing Group.

Ruth Graham was born in Qingjiang, Jiangsu, China (now the main district of Huai'an, Jiangsu, China), as Ruth McCue Bell. Her parents, Virginia Myers (Leftwich) and Dr. L. Nelson Bell, were American medical missionaries at the Presbyterian Hospital 300 miles north of Shanghai.[1] She grew up in China in a deeply religious household.[2] Some of her early life in China is depicted in the biography of her father, a general surgeon, in "A Foreign Devil in China" (by John Charles Pollock, ISBN 0-89066-141-3).

Bell studied for three years at a high school in Pyongyang, now in North Korea, before graduating from a school in Montreat, North Carolina, while her parents were on furlough.[1]

Ruth returned to the U.S. at the age of 17 in the fall of 1937, and enrolled at Wheaton College, outside Chicago, Illinois, where she met Graham. They married on August 13, 1943. In 1945, after a brief stint as a suburban pastor, her husband became an evangelist for Youth for Christ. The Grahams moved to Montreat near her parents where the Grahams continued to live for the rest of their married life. Despite Billy Graham being one of the world's most famous Baptists, his wife remained a Presbyterian and often taught Sunday School.[2]

Between 1945 and 1958, Mrs. Graham gave birth to five children, whom she raised — sometimes single-handedly — while her husband was away on extended national and international evangelistic crusades. The three daughters and two sons who survive her are all actively involved in ministry, including eldest son Franklin, who heads the Billy Graham Evangelistic Association (BGEA) founded by his father.[1] 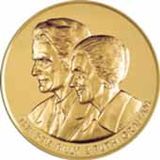 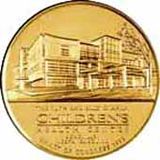 In 1959, Mrs. Graham published her first book, Our Christmas Story, an illustrated volume for children. She went on to write or co-write 13 other books, many of them works of poetry she wrote as an emotional release while her husband was so often on the road through the years.[1]

Mrs. Graham’s significant role in Billy Graham's ministry was recognized in 1996, when they were jointly awarded the Congressional Gold Medal in a special ceremony in the U.S. Capitol Rotunda in Washington, D.C..[2]

Ruth Graham was always a vital part of Billy Graham’s evangelistic career, and he turned to her for advice and input about many ministry decisions. One of the early uses of media by the BGEA was the “Hour of Decision” radio program begun in 1950, which she named. After her upbringing in China and high school experience in Korea, she continued to have compassion for the people of Asia. She encouraged her husband to visit and later accompanied him during his historic visits to the People's Republic of China.[citation needed]

In 1966, she founded the Ruth and Billy Graham Children's Health Center in Asheville, North Carolina, with which she was actively involved until her death.[2]

Ruth Graham had been in frail health since suffering spinal meningitis in 1995. This was exacerbated by a degenerative osteoarthritis of the back and neck that began with a fall while testing a swing she made for her grandchildren in 1974 that resulted in chronic back pain for many years. During the final months of her life, Graham was bedridden and had contracted pneumonia.[3]

The day before Ruth's death, Billy Graham released a statement through the Billy Graham Evangelistic Association stating, "Ruth is my soul mate and best friend, and I cannot imagine living a single day without her by my side. I am more and more in love with her today than when we first met over 65 years ago as students at Wheaton College."[4]

On Monday, June 11, at Ruth's request and subsequent to consultation with her family, she was removed from life support. On June 13, 2007, following her decline into a semi-coma, Billy Graham announced that he and his wife had decided to be buried beside each other at the Billy Graham Library in Charlotte, North Carolina.[5] She died at 5:05 p.m. EDT June 14, 2007, at her home, Little Piney Cove, in Montreat, North Carolina, with her husband and five children at her bedside, just 4 days after her 87th birthday.[6] A private ceremony followed by burial on the grounds of the Billy Graham Library was held on Sunday, June 17, 2007.[7] 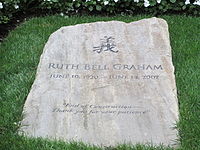 In a statement released from Wheaton College, Dr. Duane Litfin, president of the school, remarked, "Strong, steady, and dauntless, Ruth Bell Graham was the glue that held the many of the parts of their lives together." Understanding the importance of his calling, Ruth joined Reverend Graham willingly in his ministry, though she preferred her role to be behind the scenes.[8]

Ruth Graham was a poet and writer, authoring or co-authoring 14 books, as well as a regular contributor for newspapers and magazines.

Her biography, A Time for Remembering (later reissued as Ruth: A Portrait), was an early work of novelist Patricia Cornwell.[9]