In English, Ruthenia /ruːˈθiːniə/ is a geographical exonym for a cross-border region of Europe. It can refer to significantly different and even mutually exclusive areas, dependent on the historical period and subject.

The word "Ruthenia" originated as a Latin rendering of the region and people known originally as "Rus'" – the same root word as Russia. In European manuscripts dating from the 13th century, "Ruthenia" was used to describe Rus': the wider area occupied by the Ancient Rus' (commonly referred to as Kievan Rus'). This historical territory corresponds to modern Ukraine and Belarus, and Russia. However, the geographical implications of "Ruthenia" and "Russia" began to diverge in meaning as early as the 14th century.

By the 15th century two major states claimed their Rus' ancestry: the Muscovy and the Polish–Lithuanian Commonwealth. Natives used different forms of the name Rus' for their country, and some of these forms also passed into Latin and English.

In the 14th century the southern territories of ancient Rus', including principalities of Galicia–Volhynia, Kiev and others, became a part of the Grand Duchy of Lithuania which, in 1384, united with Catholic Poland to form the Polish–Lithuanian Commonwealth. Due to their usage of the Latin script rather than the Cyrillic script, they were usually denoted by the Latin Ruthenia. Other spellings were also used in Latin, English and other languages during this period. 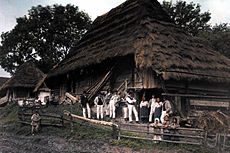 These southern territories have corresponding names in Polish:

The use of the term Ruthenia on the lands of ancient Rus' survived longer as a name used by Ukrainians for Ukraine. When the Austrian monarchy made Galicia a province in 1772, Habsburg officials realized that the local East Slavic people were distinct from both Poles and Russians, and still called themselves Ruthenians, until the empire fell apart in 1918.

In the 19th century the ethnonym Ukrainian was not in common use. Indeed, Ukrainian poet Taras Shevchenko despite using the word Ukraine for the area of ancient Rus, never uses the term Ukrainian as an ethnonym in any of his works, but rather uses the terms "Kozak" or "Rusyn" and "Malorossian" ("малороссийский"[1]), which was according to the law and society norm made by Russian Empire.

In the Russian Empire by 1840 the superior term Малая Русь (or Малороссия), Little Rus', Rus Minora for Ruthenians become degradative and they began calling themselves Ukrainians for Ukrayina.[citation needed] In the 1880s and 1900s, the popularity of the ethnonym Ukrainian spread and the term Ukraine became a substitute for Ruthenia among the Ruthenian/Ukrainian population of the Russian Empire. In time the term Ruthenian became restricted to western Ukraine, an area then part of the Austro-Hungarian state.

By the early 20th century, the term Ukraine had replaced Ruthenia in Galicia/Halychyna and by the mid-1920s also in the Ukrainian diaspora in North America.

The most numerous population of the ancient Rus' descendants, the Russians,[citation needed] still keep the same name for their ethnicity (russkie), while the name of their state, Rus', was gradually replaced by its Greek transcription, Rossia. Russian population dominates the former territory of Muscovy, Vladimir Rus, The Grand Principality of Smolensk, Novgorod Republic, and Pskov Republic, and they are also a significant minority in Ukraine and Belarus.

For more details on this topic, see Rusyns.

After 1918, the name Ruthenia became narrowed to the area south of the Carpathian mountains in the Kingdom of Hungary, named Carpathian Ruthenia (It incorporated the cities of Mukachevo, Uzhhorod and Prešov) and populated by Carpatho-Ruthenians, a group of East Slavic highlanders. While Galician Ruthenians considered themselves to be Ukrainians, the Carpatho-Ruthenians were the last East Slavic people that kept the ancient historic name (Ruthen is a Latin deformation of the Slavic rusyn). Nowadays, the term Rusyn is used to describe the ethnicity and language of Ruthenians who did not embrace the Ukrainian national identity.

Carpatho-Ruthenia formed part of the Hungarian Kingdom from the late 11th century, where it was known as Kárpátalja. In May 1919, it was incorporated with nominal autonomy into Czechoslovakia. After this date, Ruthenian people have been divided among three orientations. First, there were the Russophiles, who saw Ruthenians as part of the Russian nation; second, there were the Ukrainophiles who, like their Galician counterparts across the Carpathian mountains, considered Ruthenians part of the Ukrainian nation; and, lastly, there were Ruthenophiles, who said that Carpatho-Ruthenians were a separate nation, and who wanted to develop a native Rusyn language and culture. On 15 March 1939 the Ukrainophile president of Carpatho-Ruthenia, Avhustyn Voloshyn, declared its independence as Carpatho-Ukraine. On the same day Hungarian Army regular troops started to occupy the new state. The Hungarian occupation regime was pro-Ruthenophile.[citation needed] In 1944 the Soviet Army occupied Carpatho-Ruthenia, and in 1946, annexed it to the Ukrainian SSR. Officially, there were no Rusyns in the USSR. In fact, Soviet and some modern Ukrainian politicians, as well as Ukrainian government claim that Rusyns are part of the Ukrainian nation. Nowadays the majority of the population in the Zakarpattya oblast of Ukraine consider themselves Ukrainians[1], however, a small Rusyn minority is still present[2].

The element ruthenium was isolated in 1844 from platinum ore found in the Ural mountains. Ruthenia is the Latin word for Rus'.