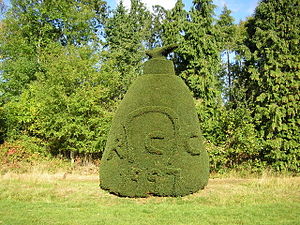 Topiary to mark the independence of Rutland at Clipsham Yew Tree Avenue; the Rutland horseshoe, the initials RCC and the date 1997

Rutland County Council is a unitary authority responsible for local government in the historic county of Rutland in the East Midlands of England. The current council was created in April 1997.

The Council consists of 26 councillors, representing sixteen electoral wards of the county. It has all-out elections on a four-year cycle and follows a district pattern, with elections held in May 2007,[3] May 2011 and May 2015.

The ceremonial head of the Council is the Chairman, and the executive follows the leader and cabinet model.

The current council is led by the Conservatives, with an opposition of Independents, and Liberal Democrats.

The political composition is as follows.

File:Rutland UK ward map (blank).svg The county is divided into electoral wards, returning one, two or three councillors. The current wards were first adopted for the 2003 local elections.